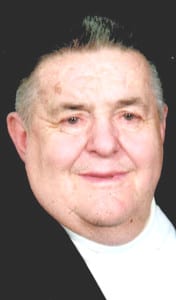 Robert L. Wilson, age 76, of Delta, passed away Monday morning, February 16, 2015 at Hospice of Northwest Ohio in Toledo. He was born in Waldron, MI on October 16, 1938 to the late E.J. Wilson and Ruth (Tuttle) Wilson. Robert was a graduate of Lyons High School in 1957. He was an U.S. Veteran having served with the U.S Army.

Robert married Sarah “Sally” Chilcote on September 9, 1961; and later preceded him in death in 2001. In 2004 Robert married Judith (Cedoz) Maddock and she survives. Robert was owner and operator of Mann’s Corners Skating Rink in Lyons and W&W Insulation Plant; where he took great pride in hiring good people and creating great friendships. He also was a co-owner and operator of Morenci Skateland in the 1980’s. Robert was an avid race fan and bowling enthusiast.

Along with his first wife, Sally, he was preceded in death by his grandson, Eric Wilson.

In lieu of flowers, contributions may be made to the Delta Assembly of God in Robert’s memory. Online condolences may be sent to the family through our website at www.barnesfuneralchapel.com