By Tammy Allison – THE VILLAGE REPORTER

What began as a simple desire to help someone in need, has spread into something much larger. The idea, “Taking it to the Streets,” started as a Facebook page only months ago by organizer Linda Wurns to help the homeless of Toledo and spread some holiday cheer.

Last year, she and friend Marquita Woodring helped a struggling family celebrate Christmas. The feeling of helping others was something she wanted to do again this year but on a larger scale. In October, she mentioned the idea to a few close friends. In November, she posted the idea on her personal Facebook page. It was a simple post…she shared that for the holidays this year, she and a few friends were planning to load up her van with warm clothes, coats, shoes, hats, gloves, scarves, and food and take it to the streets of Toledo. She never could have imagined the power of that simple post to spread as it did.

The message advertising that she had room for seven to join her quickly spread. Within an hour, she had 40 messages. Within two hours, she had 80 messages. Friends shared the posts with their friends who were also spreading the word. Within one week, 120 people had responded with interest in the project. When the response reached 350 people, it was suggested that a group page be created. The Facebook page, “Taking it to the streets,” was born and another 100 people jumped onboard to the idea.

Wurns was terrified. “I had never planned for this and didn’t know how I could include all these people to share the experience!” Her friend Ryan Lamb encouraged her that she could do this. With his belief in her and the support and encouragement of friends, it gave her the strength and faith to push on with the idea. 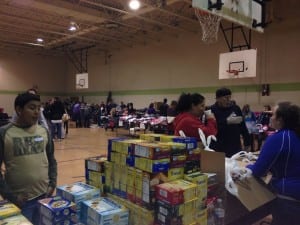 Donations began pouring in from all over including Michigan, Indiana, Georgia, and Florida. Over fifty businesses participated. The event date was set to happen December 8 at 1:30. Wurns and Woodring began making phone calls searching for a building to accommodate the event. Obstacle over obstacle was encountered but Wurns was not going to give up on her wish to help others. Finally, the week before the event, a building was located. The power of the internet once again proved resourceful. Raul Alvarado, a coach at Ayersville Local Schools, had joined the group Facebook page because he wanted his Lady Pilots Basketball Team to experience the project. Raul’s sister Linda Alvarado, who is the Director for Community Relations for the city of Toledo, was able to locate a building called “The Believe Center” on the corner of the Anthony Wayne Trail and South Avenue. 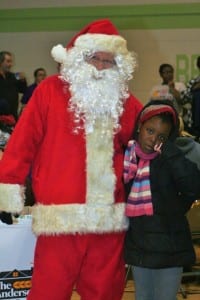 Other community organizations joined in the efforts. The Seagate Food Bank of Toledo created flyers and distributed them to area food pantries and homeless shelters. The next challenge Wurns faced was figuring out how to bus the homeless in from downtown Toledo. “We called churches, Tarta, anywhere where we could find someone with buses, but no luck.”

Pam Waugh, Transportation Supervisor of the Wauseon Schools, joined the efforts. Although it was not possible for Fulton County busses to leave their districts, she tried contacting the Toledo schools and Washington Local but again they faced another obstacle as each replied they could not help. Waugh continued in her search until she found Childers Limousine Service on Door Street in Toledo. The Limousine Service offered two busses that could hold 55 people each.

On the day of the event, approximately 170 volunteers showed up at the Believe Center. Trailers and vans needed unloaded. Marked boxes were organized. Wurns expressed gratitude at the outpouring of help. “I have never seen a large group so together who worked efficiently and organized without any problems whatsoever. It was fantastic.” 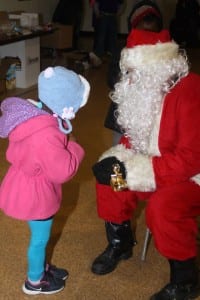 The event was prepared with food to feed 800 plus people. Warm clothes for men, women, children, and infants had been donated. Coats, hats, gloves, scarves, shoes, boots, blankets, and sleeping bags, all things to keep those in need warm, were plentiful. Hygiene bags had been put together by Jackilyn Brown and the Morenci Cub Scout Pack 681. Lunches had been packed. Apples were donated by Johnston Fruit Farms, and cases of bottled water had been donated. A candy table for the children was set-up. Many non-perishable food items were available. In total, 52 businesses donated items.

The Seagate Food Bank had designed a route for the buses the day of the event. Each stop was empty. Curt Badgley got off the bus at the Cherry Street Mission and walked the streets until he found homeless people nearby. He shared with them about the event. The responded that they had not known about the event, but they would spread the word. The bus drivers followed the lead of these homeless folks and found “Family House” where a load of homeless children were brought back to eat.

The children were excited about the warm clothes and shoes. A little boy excitedly waved a pair of shoes around and exclaimed, “Look what I got myself for Christmas!” Wurns estimates that at least 400 people were clothed and fed at the event. Everyone expressed appreciation. “Everybody who came through to get food and clothes were all polite saying please and thank you to everyone. Emotions definitely ran high.”

Congresswoman Marcy Kaptur showed up for the event and even donated a blanket that was quickly claimed by a woman who felt honored to have something from Kaptur. But perhaps, the most important visitor of all that day, especially to the children, was Santa himself. 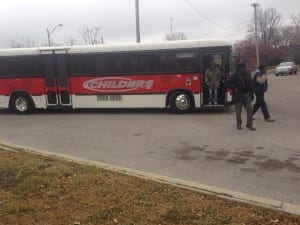 What began as a simple idea, a small post on Facebook spread to an idea that not only helped hundreds in need in Toledo but allowed others to share the Christmas spirit. In three weeks, the event was pieced together as a success. Wurns believes, “It’s up to each and everyone of us to make a difference. Everyone should adopt the idea that they need to leave this world a better place than they found it because it’s going to take everyone to do it. Every volunteer including kids made that day happen.”

The group is planning an event next year for Fulton County and possibly Toledo again. You can access the information at their Facebook page-“Take it to the streets.”