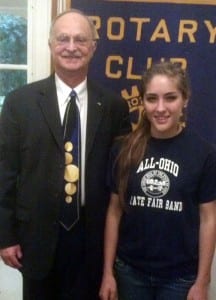 ST SPEAKER … Emily Stark spoke to the Stryker Rotary Club about her experience preforming in the All Ohio State Fair Band during the summer. The first step in the selection process for a position in this band requires a recommendation from a band director. Emily was one of four base clarinets in the 200 member band. Emily told the group that this year’s band had more girls than boys, but in years past the band were mostly boys. She considered this a very good experience as she was able to work with ten different directors during the two week fair season. The band stayed in barracks and the schedule was very structured with only a few hours each day for free time. Emily also commented on the many rules that band members were expected to abide by during their stay. The band performed both in a concert hall as well as marched up and down the fairground. Emily carried a flag during the marches as her instrument is not used in a marching band. Emily is looking forward to next year as she is planning to participate in the band one more year. Emily on the right is pictured with her stepfather and Stryker Rotary President Rev Jim Ernst.