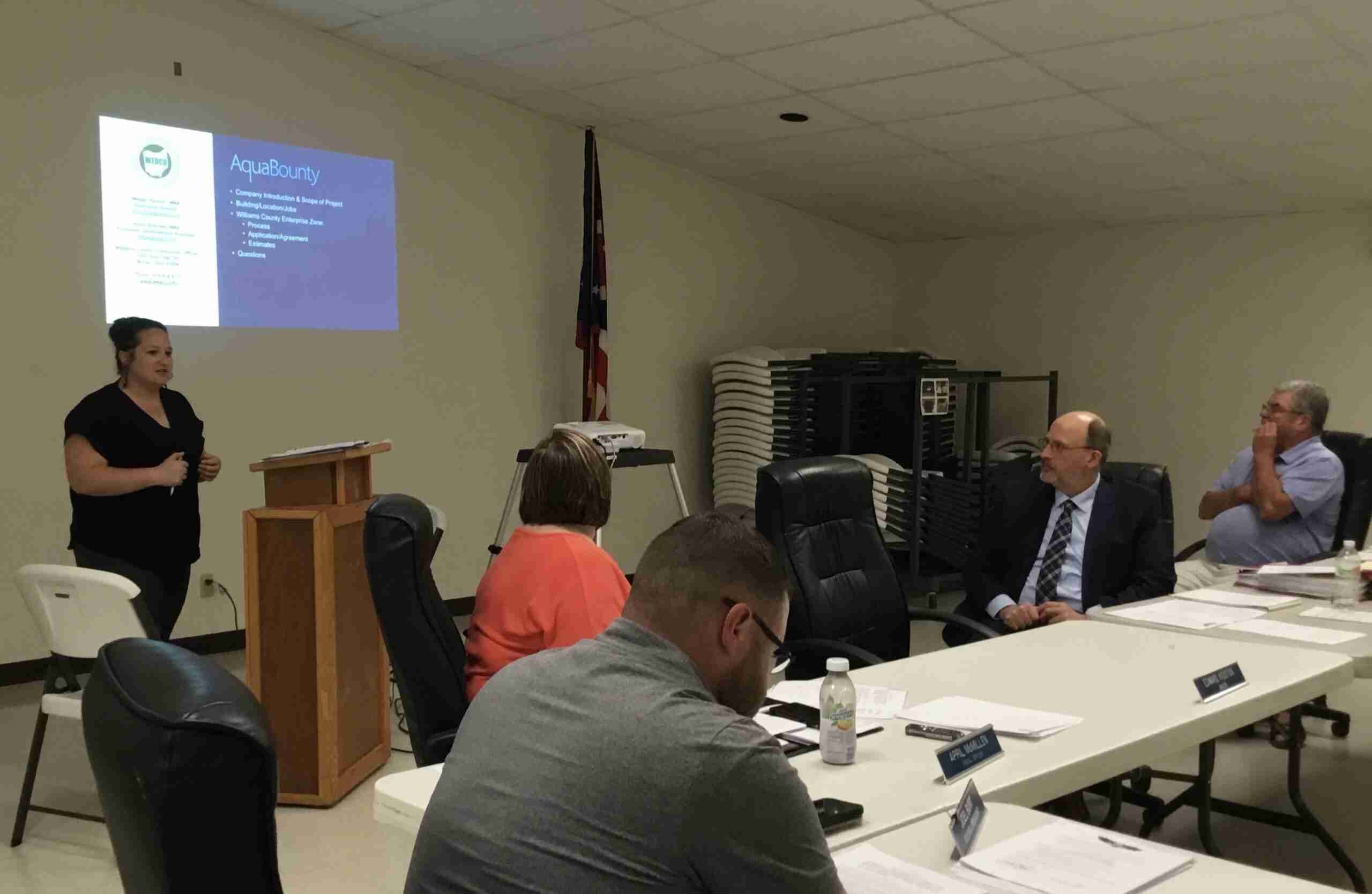 A special meeting was called by Pioneer Village Council for 7 p.m. on Thursday, August 26, 2021 with a detailed announcement, concerning everything that would be covered, being sent to the daily newspaper on Tuesday, August 24 before the meeting, to alert the public.

The agenda announcement listed: Street Ordinances; Fall Fest discussion; an Executive Session to discuss confidential information related to the applicant of the potential Enterprise Zone Agreement with AquaBounty; legislation regarding the potential Enterprise Zone Agreement; Sale of village’s electric transmission assets to AMP Transmission, LLC, with legislation; potential hiring of Spectrum Engineering Corp. to oversee the construction of a new substation with legislation; authorize administrator to seek bids for voltage regulators with any necessary legislation; review engineering proposals for the design and construction oversight of the Kexon Dr. Extension project with possible legislation (this was put on hold due to some “due diligence” that needs to be done); approve Bell Engineering to design and prepare bids for a sanitary sewer line and pump station on Clark St. with any necessary legislative action.

The announcement ended with the statement, “No other business will be discussed at the meeting.”

This large number of items was covered during the meeting, making it an hour and forty five minutes long, which included the Executive Session to hear the details about AquaBounty.

-Ordinance 34 an ordinance determining to proceed with the improvement of South State Street by the installation of new curbs, new storm drainage, new sidewalks and waterline replacement for S. State St. from the centerline of the intersection of West Church St. and S. State south to a point 551 linear feet south of the northwest corner of the southwest quarter of section 21 of Madison Township, a distance of approximately 2,800 linear feet.

-Ordinance 35 an ordinance determining to proceed with the improvement of S. State St. by the installation of new curbs, new storm drainage and new sidewalks along the east side of S. State from a point 551 linear feet south of the northwest corner of the southwest quarter of section 21 of Madison Township to the southernmost point of the radius at the Pioneer Mobile Plaza, a distance of approximately 695 linear feet.

-Ordinance 37 an ordinance determining to proceed with he improvement of Lincoln Street by reconstructing Lincoln St. from the northernmost point of the radius at the intrusion of Mulberry St. and Lincoln St. south to the northernmost point of the radius of the intersection of Mulberry St. and Baubice St., a distance of approximately 330 linear feet, to include new curbs, new storm drainage, new sidewalks and waterline replacement.

They also reviewed the bids for S. State St. Alternate, N. State St., Mulberry and Lincoln Streets for the improvement project and voted to approve, declared as an emergency, Ordinance 38 an ordinance accepting the bids of Vernon Nagel, Inc. for the N. State St., Mulberry St. and Lincoln St. project, and the S. State St. project, authorizing the Village Administrator to enter into agreements with Vernon Nagel, Inc., and authorizing the Village Administrator to sign all documents necessary to effectuate the agreements.

Mayor Ed Kidston commented that Vernon Nagel is aware that the deadline for completion of all this work, is April or May and they have said they will most likely start on the projects in January.

He also clarified that even though Vernon Nagel was the second lowest bidder on one of the streets, when his bids were all added together, his grand total bid was the lowest to have one contractor do the entire group of projects.

Kidston and Bell Engineering agreed that it would be best to have only one contractor in town working on all of them, instead of two contractors having to work around each other. The asphalt should be completed by the state before the fourth of July.

“It is going to be a zoo, causing some havoc with state street out of commission, but we ask for all the residents to be patient and we will have a beautiful brand new street, when this is all done,” Kidston said. He added that the contractor is going to bring in enough man power to get it all done on time for the asphalt to be done by the state.

Council also met with Michael Kidston, the representative from the Chamber of Commerce, concerning details that needed approval for Fall Fest to take place.

He gave each council member a list of possible activities for Fall Fest, stating that he did not want it out for the public yet as the committee has not yet determined which activities will absolutely be taking place.

He asked for approval of the Parade Route and for the Beer Tent which would be run by the Legion and would limit people to the Legion parking lot. Council voted on the two items separately, with unanimous approval for the parade route and with council member Connie Salisbury voting against the Beer Tent. Both were approved and the Fall Fest will proceed for October 2.

At this point in the meeting, Mayor Kidston left and did not return, with President Joel Burt leading the meeting with guidance from Solicitor Tom Thompson.

They went into an Executive Session from 7:20 to 8:10 “to discuss confidential information related to applicant of potential Enterprise Zone Agreement.” When they returned to open session,

Council asked Megan Hausch of WEDCO to do a brief power point explanation of what AquaBounty is about. The points covered included:

-The building, location and jobs

-Basics of what is in the application for the Enterprise Zone Agreement – process, application/agreement and estimates

-They will be adding 112 jobs over a period of time with those jobs payroll being over 5.4 million; will need different skill sets for these high paying jobs

-No antibiotics will be used

-Will be located with a private road to the site. Pictures of phases will be shared with the public

-Construction is planned to start in the fourth quarter of 2021, if there are no delays from weather

-Types of jobs that will be created will include Aquaculture Technicians, Technical/R&D Support, Food Safety and Quality Management, Maintenance, Salmon Processing, Supply Chain/Logistics, and Administration – different than traditional manufacturing.

-Key items in the agreement: Codes, Project Description, Compliance, Terms – 100% at 15 years with side agreements – required donations (% of projected savings annually ). In this case they will be donating 4% to Four County, 35% to North Central and 1 % to WC Infrastructure Fund annually

-They will bring eggs in and start the growing process during the construction.

She said that the school appreciates the great relationship they have with the Village of Pioneer and have chosen to waive this, as they feel they are compensated fairly in this negotiation.

Moving on to the next topic, Mr. John Courtney, from Courtney and Associates, the Village’s electric consultant, spoke with council concerning the ordinance for sale of the village’s electric transmission assets to AMP Transmission, LLC.

Courtney said that AMP T was the only one to respond to the RFP and they are proposing to buy it at book value, original value minus depreciation, at about one billion seven hundred thousand dollars.

Courtney and Associates recommended to the council that they take the offer, “even with or without the new load coming to town,” adding that “It is a critical path to getting the new substation.”

He recommended they pass the ordinance, which council proceeded to do – Ordinance 40 an ordinance authorizing the village administrator to enter into a contract or contracts, for the sale of municipal-owned transmission assets to AMP Transmission, LLC, or subsidiary of American Municipal Power, Inc. (AMP); and declaring an emergency.

Mr. Thompson addressed the next item on the agenda, the possible hiring of Spectrum Engineering Corp. to oversee the construction of a new substation for the Village Electric System.

He stated that he feels the Village Administrator should put out a request for interest so that council can then choose the most qualified engineer for the project.

No action was needed on the item concerning voltage regulators as the cost came in under the requirement for council approval, thus dropping that off the agenda.

Concerning the review of engineering proposals for the design and construction oversight of the Kexon Dr. Extension project. Village Administrator Al Fiser said he had gotten in touch with Jones and Henry Engineering firm regarding what the village wanted.

He had reviewed their proposal and feels that their engineering cost is more than the village wants to pay, so he recommended to council that they check with Bell Engineering to find out what their cost would be and decide on it after they get their response.

Following some discussion, council voted to approve a motion to authorize Village Administrator to reach out to Bell Engineering for a quote.

There was also some talk about the timeline for this Kexon Drive project, with Fiser and Ms. Hausch weighing in on it.

With some questions still unanswered on the environmental side, this choosing of an engineer will buy them some more time, Fiser said.

Hausch added that a portion of the environmental answers need to be taken care of before they proceed. “We need to take a little pause, for more investigation, on applying for the CDBG funds.

We are still going to, but need to do our Due Diligence and have all the answers for environmental.”

Fiser said that Dennis Miller of MVPO called about the CDBG funds, a half a million dollar grant which they will get for this project. Waiting and making sure all these things are in line will make it better and keep them from jeopardizing that grant.

Fiser said that all the other grants are in place and that final one will make the village have close to 80% of the money needed for the Kexon Dr. project.

The final discussion of the evening was concerning the “approval of Bell Engineering to design and prepare bids for a sanitary sewer line and pump station of Clark St.” Council agreed with Fiser on the need for this and approved a motion as stated.