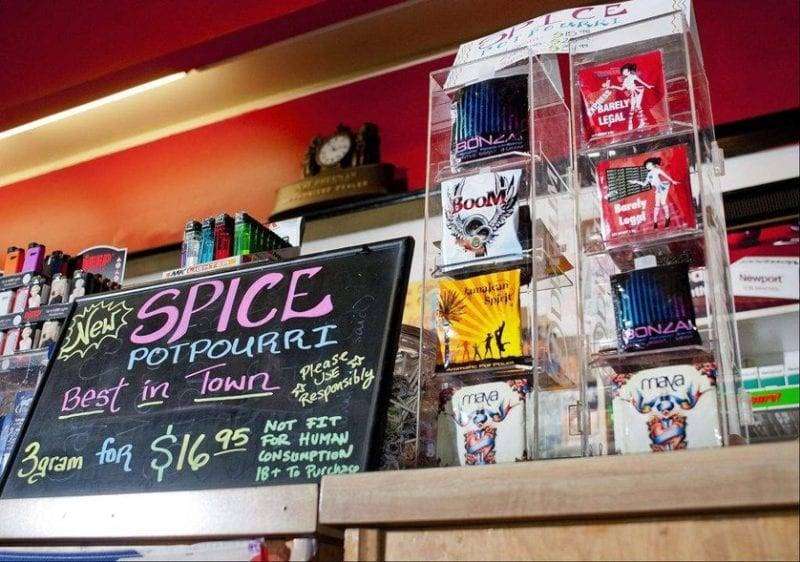 With usage on the rise, synthetic marijuana is facing increasing scrutiny on a local, state and national level. However, it seems that many community members are refusing to wait on local authorities and other interventions to get this product out of their towns. Currently members of the community are speaking out about their concerns of this product being sold, and they are facing some opposition.

Advertised as “potpourri” locally, synthetic marijuana is available in gas stations, convenience stores, and tattoo shops as well as other unclassified businesses. The brightly colored packets are usually displayed prominently near cash register, or are behind the counter and come with warnings against consumption, although critics say it’s just there for show. The colorful and professional packaging and wording often changes as the laws are amended. In some jurisdictions, depending on how the laws are written, the prosecutor must prove the person intended to use the product (not just possess it), which makes it even more difficult to reduce availability of these substances. The costs can range is from $25-$75 depending on how many grams is being sold.

The Centers for Disease Control and Prevention estimates 1 in 9 high school seniors have used the drugs. Calls to poison centers about the drugs rose from 2,900 in 2010 to 7,000 in 2011 and hit 1,200 in the first two months of 2012. According to Mary Juarez of Edgerton, she has followed the local statistics closely and said that in 2011 there were at least 50 recorded overdoses taken to the emergency room at the hospital in Bryan. That number grew to 89 in 2012, and continues to climb. Juarez is one community member that has recently spoken publicly about how drug use has affected her life. Three years ago her “world shattered” following the death of her son. He passed away after being taken to the hospital following an overdose. He had struggled with an addiction to prescription pain pills. She is now out in the public speaking out for her son, something he had wanted to do. She shares the dangers of drug abuse and addiction, and has spoken to over fifty schools, clubs and organization is hopes of educating children.

The dilemma we are faced with because these drugs have many different “names” that are given to mask the fact they are chemical substances that have been created to produce some sort of a “high.” Although the chemical composition of some of them is known, the rogue chemists producing them are constantly changing the formulations so they can stay ahead of the latest federal and state legal definitions and laws to avoid prosecution. The product holds particular appeal for some because it is undetectable in conventional drug tests and supposedly offers a similar high to pot.

Manufacturers of the products attempt to evade legal restrictions by substituting different chemicals in their mixtures. The DEA continues to monitor the situation and evaluate the need for updating the list of banned cannabinoids. The five banned active chemicals are JWH-018, JWH-073, JWH-200, CP-47, 497, and CP-47, 497-C8. Most states have also banned the products, but the list of banned substances varies by state and the states keep revising the lists to try to control new products that are developed to get around the current laws. Toxicology laboratories are developing tests for these drugs, but as of September 2012, only 17 of all the synthetic cannabis variations can be identified in urine tests developed by one lab and most of the blood and oral fluid tests only identify 12.

Makers produce chemicals synthetically and then spray them onto dry herbs and plants, hoping to mimic the appearance of marijuana. The chemicals can be many times more potent than the THC found in marijuana.
The actual high can be much different, though, and in many cases produces effects opposite of the relaxed, happy state commonly associated with marijuana usage. Side effects can include increased heart rate; paranoid behavior, agitation and irritability; nausea and vomiting; confusion; drowsiness; headache; hypertension; electrolyte abnormalities; seizures; and loss of consciousness.

A Montpelier resident said that he and his wife went to a local store and they were shown how to use the potpourri by smoking it. The substance was prepared for them in the store by the store clerk. Both the man and wife smoked it, but later the wife had to be admitted to the emergency room due to a rapid heartbeat. They are now concerned that this product needs to be banned.

A Williams County resident who wished to remain anonymous due to his place of employment, spoke candidly about his experience using “spice/potpourri”. The man said that he was easily able to walk into a Montpelier store and purchase the product. He said that he has previously smoked marijuana but because of his new employment he was worried about “being pulled for a random drug test.” He said when he took his first “hit”, he did not care for the taste of it. “Something did not taste right and is had a horrible after taste as well.” At first he did not feel much of an effect at all. About thirty minutes passed and he decided to smoke more. He took bigger hit from the pipe and he held it in for about ten seconds or so. This time the effects came soon after. He recalls feeling like he was “coming out of his body”. He then began to experience some paranoia and was checking his cell phone repeatedly and went around his house pulling down screens and locking his doors. At that point he decided to go lay down on the couch, but he started shaking like he was really cold. He went to his closet to get a sleeping bag and he got inside, but he then felt like he was suffocating. He recalls that his heart starting beating very fast and his mind felt “numb”. The feeling that he had lasted for a long time, approximately 3 hours. It was at that point that he began to feel better, but even the next day he remembered feeling “out of it”. This was a feeling that he never had when smoking marijuana. When asked if he would smoke this again, he said “I don’t plan to, but things happen. Maybe the next time will be different.” When asked if he would recommend the use of this product to others he replied “Not really, but with marijuana being illegal people are going to use it.”

The Williams County Sheriff’s Department is continuing to fight the drug issue to the best of their ability. Sheriff Towns said that “the biggest problem at this time is the law needs to catch up with the production and make all look alike drugs illegal also”. According to Sheriff Towns, Dep. McCord is in DARE training right now and will be starting in the county schools fifth grade early next year.

In 2010 legislation was passed in Ohio banning the drugs. There was a decrease seen with the substances for a while, but because of the changes in the chemical composition they made a comeback. Williams County has recently seen an increase because boarding states like Indiana recently passed laws making the new compounds illegal. With those changes, business that were in Indiana relocated across the state lines into Ohio.
Recently the Bryan City Council met passed an ordinance taking a proactive measure against “the sale, manufacture, distribution and possession of synthetic and lookalike drugs”. This is one of the first places to take a stand in the area, and possibly the state. Other communities appear to be working hard to take a similar approach to remove the availability of the substance as well.