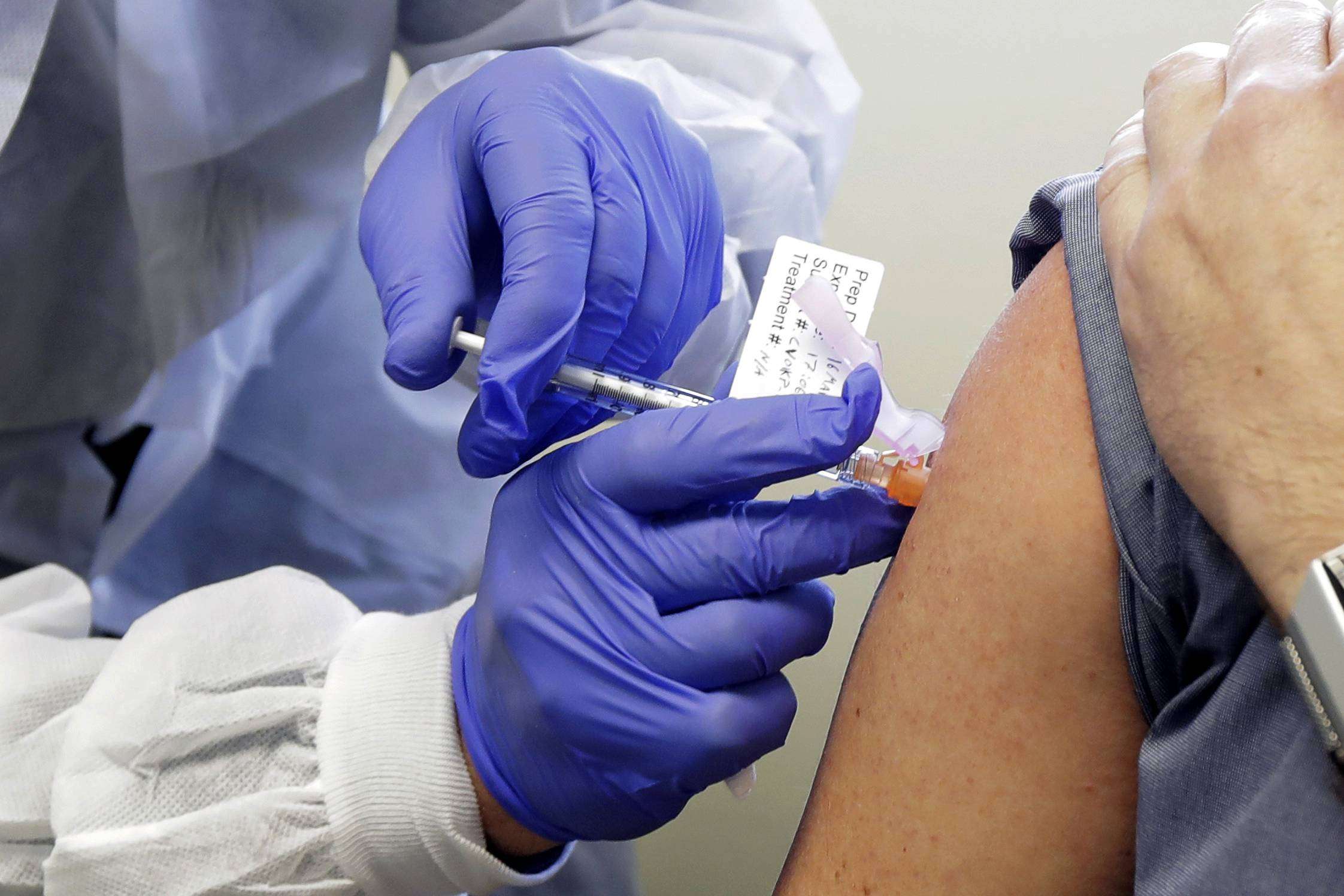 FILE – In this March 16, 2020 file photo, a subject receives a shot in the first-stage safety study clinical trial of a potential vaccine by Moderna for COVID-19, the disease caused by the new coronavirus, at the Kaiser Permanente Washington Health Research Institute in Seattle. Britain, the United States and Canada accused Russia on Thursday July 16, 2020, of trying to steal information from researchers seeking a COVID-19 vaccine. (AP Photo/Ted S. Warren, File)

LONDON (AP) — Pharma giants GlaxoSmithKline and Sanofi Pasteur have announced they will supply 100 million doses of an experimental COVID-19 vaccine to the United States as governments buy up supplies in hopes of securing a candidate that works.

The United States will pay up to $2.1 billion “for development including clinical trials, manufacturing, scale-up and delivery” of the vaccine, the two companies based in Europe said in a statement. Sanofi will get the bulk of the funds.

The U.S. government has a further option for the supply of an additional 500 million doses longer term as part of its Operation Warp Speed program.

“The portfolio of vaccines being assembled for Operation Warp Speed increases the odds that we will have at least one safe, effective vaccine as soon as the end of this year,” U.S. Health and Human Services Secretary Alex Azar said in a statement. “Today’s investment supports the Sanofi and GSK adjuvanted product all the way through clinical trials and manufacturing, with the potential to bring hundreds of millions of safe and effective doses to the American people.”

Earlier this week the British government signed a deal for 60 million doses of a potential coronavirus vaccine that could start to be rolled out in the first half of next year.

The vaccine being developed by Britain’s GSK and France’s Sanofi’s is based on existing DNA-based technology that is used to produce Sanofi’s seasonal flu vaccine. It is one of several vaccines in development.

“The global need for a vaccine to help prevent COVID-19 is massive, and no single vaccine or company will be able to meet the global demand alone,” said Thomas Triomphe, executive vice president of Sanofi Pasteur.

The executive arm of the European Union issued a statement later Friday saying it had concluded exploratory talks with Sanofi to “provide for an option for all EU member states to purchase the vaccine.” The idea would be to offer a contractual framework for the purchase of 300 million doses should the vaccine work.

“We are in advanced discussions with several other companies,” European Commission President Ursula von der Leyen said. “While we do not know today which vaccine will work best in the end, Europe is investing in a diversified portfolio of promising vaccines, based on various types of technologies. This increases our chances to obtain rapidly an effective remedy against the virus.”

Be the first to comment on "US Sinks Another $2.1 Billion Into A Potential Vaccine"