WILLIAMS COUNTY GAME OF THE WEEK: Ayersville Pulls Away Late To Top Edgerton 42-22 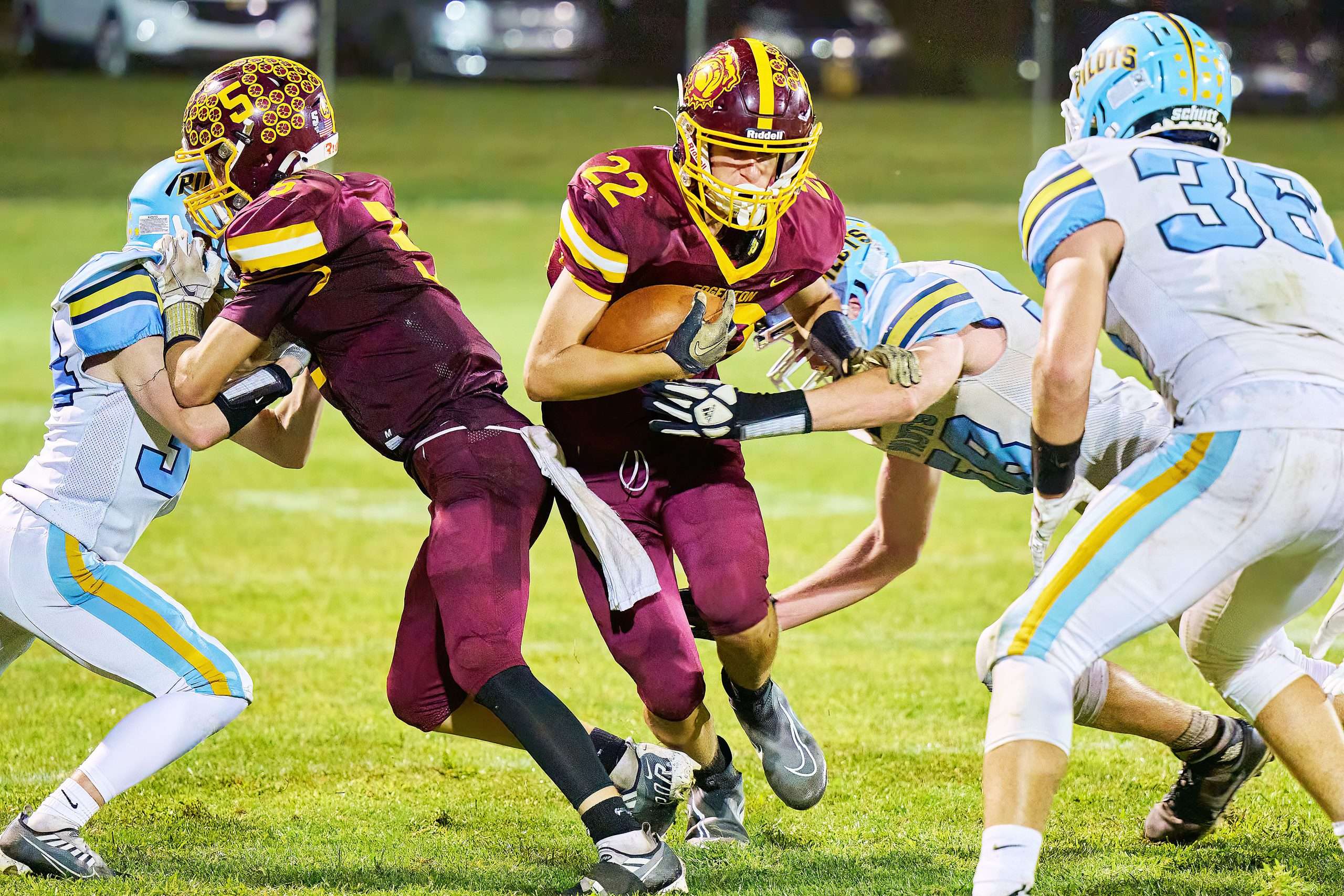 YARDS AFTER CATCH … Cory Herman runs through an arm tackle by an Ayersville defender after a second half reception. Herman had five catches for 33 yards on the night including a five-yard TD reception in the first half. (PHOTO BY RICH HARDING, STAFF)

EDGERTON – Edgerton’s Owen Roth returned the second half kickoff 84 yards for a touchdown and Parker Elden’s extra point kick tied the game at 22-22. After that though it was all Ayersville.

The Pilots offense scored 20 straight points and Ayersville’s defense held Edgerton to just two second half first downs as Ayersville pulled away to a 42-22 win over the Bulldogs.

“They are a physical football team,” said Edgerton head coach Brody Flegal. “They took it to us early and we were able to come back. But they answered us, and we will learn from this and get better.”

“The offensive line did a great job blocking for me and when I run the ball, I just keep pushing myself to do the best I can,” Hauenstein said.”

Right out of the gate Ayersville jumped out to a 16-0 lead. The Pilots took the opening kickoff and drove 61 yards on eight plays, all on running plays.

Berneer carried the ball in from eight yards out and Hauenstein ran in the two-point conversion to put Ayersville up, 8-0.

After Hauenstein’s 21-yard run to the Edgerton four-yard line, Hauenstein threw a four-yard touchdown pass to Tyson Schlachter. Hauenstein then ran in the two-point conversion to put Ayersville up, 16-0.

Edgerton then answered on Roth’s eight-yard TD run and Everetts ran in the two-point conversion to cut Ayersville’s lead to 16-8.

Ayersville pushed the lead in the second quarter to 22-8 on Hauenstein’s three-yard TD run on fourth down and one.

Edgerton then came right back to cut the Ayersville lead to 22-15 on Everett’s six-yard TD pass on fourth and goal.

After forcing Ayersville to punt, Edgerton threatened to tie the game moving to a first and 10 at the Ayersville 12-yard line. But a five-yard penalty moved the Bulldogs back to the 17-yard line.

Then, on fourth down from the 11-yard line, Everetts was sacked for a four-yard loss on the last play of the first half. Ayersville then held on to a 22-15 halftime lead.

After Edgerton tied the game at 22-22. Ayersville put together an 11 play, 71-yard scoring drive. Hauenstein scored from the five-yard line and Berner ran in the two pointer to put Ayersville up 30-22.

After an Edgerton punt the Bulldogs appeared to have stopped Ayersville on fourth down and 13 on an incomplete pass. However, Edgerton was called for roughing the passer giving Ayersville a first down.

After a penalty on Ayersville, the Pilots gained new life when Hauenstein completed a 21-yard pass to Weston McGuire on second and 17, giving Ayersville a first down at the Edgerton 15.

After an eight-yard Berner run and a four-yard penalty on Edgerton, Berner ran it in from the one to put Ayersville up, 36-22 with 11:17 left in the game.

Ayersville then took over the ball on downs at the Edgerton 42, when Everetts threw an incomplete pass on fourth down.

Ayersville quickly salted the game away on Berner’s two-yard scoring run with 6:44 to play to put Ayersville up 42-22. The key play on the drive was Hauenstein’s 41-yard pass to Schlachter, to the Edgerton 11-yard line.

“That was a play that was called by the coaches, and it worked really well,” Hauenstein said.

While Ayersville salted the game away primarily with its rushing attack, the Pilots defense also came up big. Edgerton quarterback Everetts had passed for 100 yards by halftime and rushed for 66 yards.

But in the second half, he completed just three of five passes for 18 yards and was sacked three times. He finished with 58 yards rushing.

“We made a couple of defensive adjustments for the second half and one of those was keeping Everetts in the pocket and not letting him escape,” said Ayersville head coach Andrew Mickey.

“Our pass coverage really stepped up in the second half. Every time Everetts completed a pass, our guys were right on the receivers.”