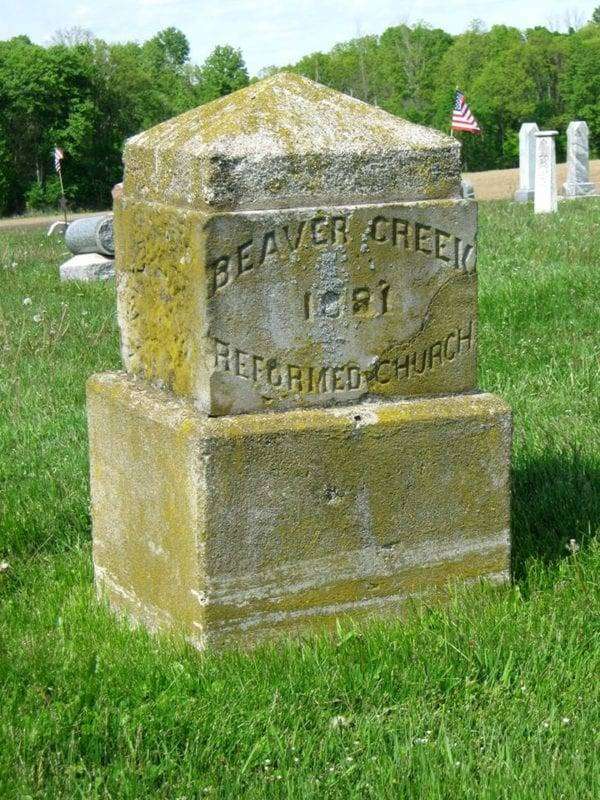 (June 12, 1881): The cornerstone of the Beaver Creek German Reformed Church was laid. The brick Beaver Creek German Reformed church was built in 1881 on the north side of County Road M between County Roads 18 and 19, replacing a log house of worship on the site. The church’s 70-foot bell tower housed a 40-inch, 1,200-pound bell, reportedly the largest church bell in Williams County at that time. Inside, behind the pulpit, was a wall painting of St. Stephen’s Gates that appears three dimensional in vintage photographs. The Beaver Creek church was part of what was known as the “Bunker Hill charge,” and shared a minister with German Reformed churches at Pulaski and Bunker Hill (on County Road J, west of U.S. 127). The Beaver Creek church closed in late 1926 or early 1927 due to declining membership, and some members of its congregation joined Presbyterian churches in West Unity and Kunkle. The church was dismantled in the 1930s. The Williams County Historical Society mounted the church cornerstone on a concrete pedestal at the former site of the church in 1958. This May 21, 2016 photograph is from the Kevin Maynard collection–Courtesy of the Williams County, Ohio, Local History Exchange.

Be the first to comment on "(1881) – Cornerstone Of The Beaver Creek German Reformed Church (Williams County, Ohio)"