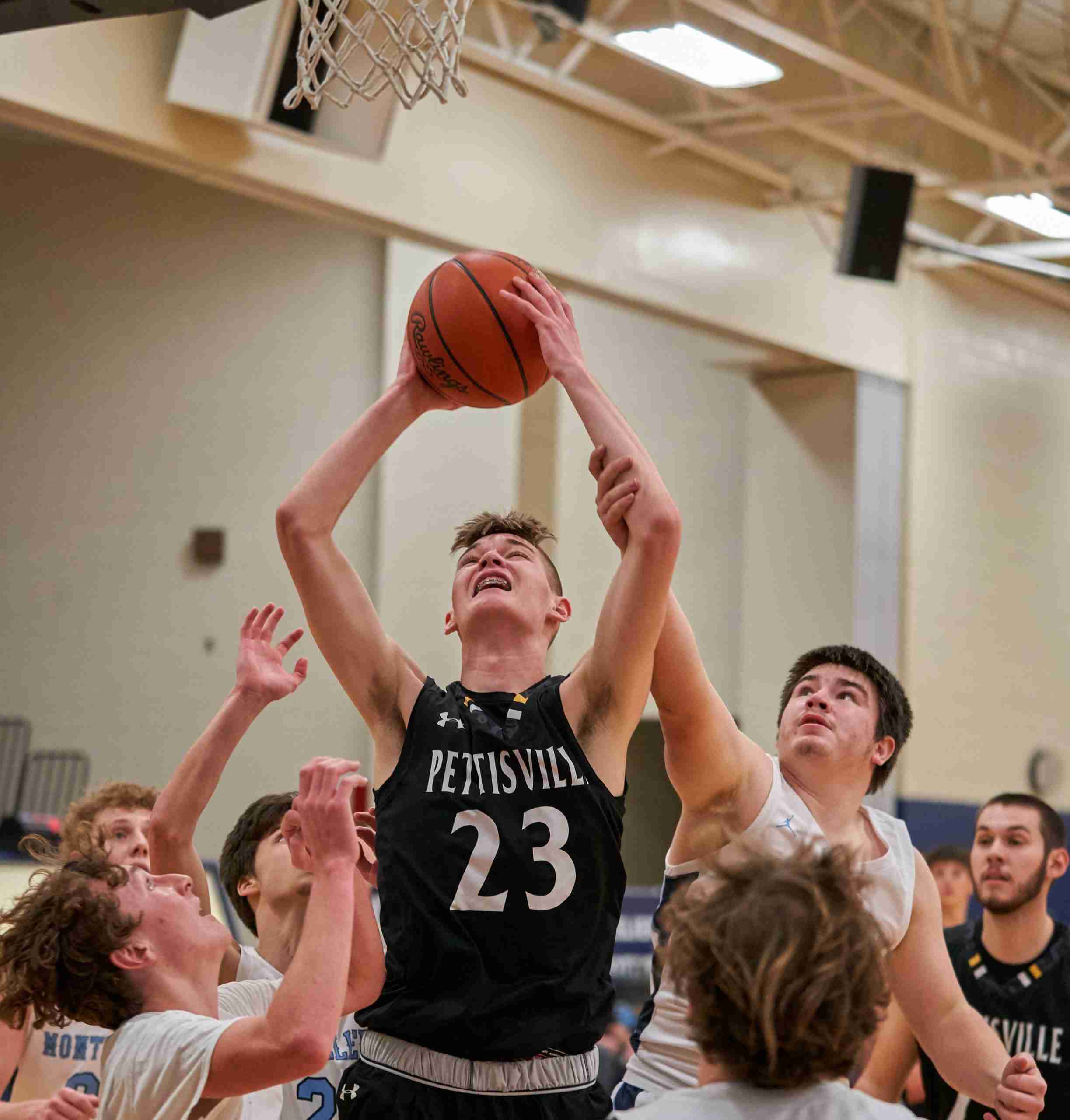 LEADING SCORER … Cayden Jacoby goes up for a bucket in a game against Montpelier last season. Jacoby returns as the leading scorer and rebounder for the Blackbirds this season as they look to win another BBC championship. (FILE PHOTO)

It will be a new look for the BBC with the addition of the Holgate Tigers who make the move from the Green Meadows Conference.

With the league going to eight teams they will still play each other twice but just one of the contests will count in the league standings.

Last year’s league champion returns their leading scorer and rebounder in junior Cayden Jacoby along with three other returning letterwinners.

Edon will be under the guidance of Matt Ripke who comes over from Edgerton after a successful run with the Bulldogs. With six returning letterwinners, including Gannon Ripke who moves in from Edgerton, the Bombers are considered the league favorite by most of the coaches.

While teams like Montpelier and Stryker were hit hard by graduation, the North Central Eagles return everyone from last season as they were in the unique position of having no seniors on the roster last year.

Among the returners for head coach Chris Fidler is leading scorer Zack Hayes, who enters the season just 34 points away from reaching 1,000 in his career.

Here are the previews for each team in order of their finish in the BBC last season.

WEAKNESSES: Filing and developing new roles on the team; replacing a solid group of seniors

SEASON OUTLOOK: “From the returning starters to our newcomers to the varsity team, each is stepping into a new role on the team or having their existing role expanded.”

“The BBC this season will have a different look with the welcome addition of Holgate. The conference will be balanced and very competitive.”

ABOUT THEIR SCHEDULE: Pettisville starts the season on the road at Delta on November 26th and begin BBC play at Hilltop on December 16th.

SEASON OUTLOOK: “Our returning letterwinners from last season provide us with varsity experience along with a group of newcomers that are hungry and will be counted on to provide much needed depth throughout the year.”

“I am a true believer that success breeds success and this group will work hard.” “Football success will help us in the fact our guys have been in heated competition and played on the big stage.”

“This group was very coachable this summer and look to pick up where we left off.”

“The Buckeye Boarder Conference will be very competitive this year. We think our early season schedule helps prepare us for BBC play and we hope to be in the mix come February.”

ABOUT THEIR SCHEDULE: With the extended football season, the Bombers will have their season opener on December 3rd as they travel to Fayette for a nonconference game. The BBC portion of the schedule starts on December 16th at Holgate.

SEASON OUTLOOK: “We hope to have many strengths, but we are looking forward to playing a more aggressive style of defense.” “While trying to pressure the ball we will be looking to turn other teams over by capitalizing on poor decisions and bad passes.”

“Offensively we will move the ball and use ball reversals to penetrate and get the defense on their heels while running an open post motion offense.”

“In my opinion we are a young team that has some learning to do, but at the same time if we figure things out we will make some people worry about us.”

“The team has to believe in each other and get out of the habit of the first person to touch the ball is the one who shoots. We’ve done that a lot in years past.”

“Our league will be tough this year. There are a number of very good teams, that have put in a lot of time together in the gym and time in the gym is what pays in gains!”

ABOUT THEIR SCHEDULE: Montpelier hosts Hilltop in the season opener on November 26th and will welcome in Fayette for their BBC opener on December 16th.

SEASON OUTLOOK: “We want to better from game one till tournament time. We have a lot of learning and growing to do but I believe that by tournament time these guys will be where they need to be.”

“The BBC this year is looking very impressive. There’s a lot of height and athleticism from almost every team.”

“Edon looks to be the favorite this year, but every night is going to be a battle. With Holgate coming into the league that should also add another physical quality league team.”

ABOUT THEIR SCHEDULE: The season starts on November 26th for the Panthers on the road against Maumee Valley Country Day with their conference opener at home on December 16th against North Central.

LETTERWINNERS LOST FROM LAST SEASON: None

SEASON OUTLOOK: “We will be a much-improved team from a year ago as we had no seniors and nine first year high school players last year and COVID took our summer of preparation away from them.”

“They were thrown to the wolves last season at such a young age and they responded wonderfully.”

“I see us being in the top two of the league this year and contending for a league title with Edon the pre-season favorite and Pettisville also in the mix.”

ABOUT THEIR SCHEDULE: North Central starts the 2021-2022 campaign with a nonconference game at home versus Lakewood Park Christian and the BBC schedule starts on December 16th at Stryker.

SEASON OUTLOOK: “We have two starters and three players with varsity experience coming back. We will have strong guard play with multiple guys with point guard experience.”

“We should be able to create some matchup problems with our quickness and ability to attack the rim.”

“This group of boys have a great passion for the game and are very coachable. If they continue to work hard every day and keep a positive attitude we will have a fun season.”

“The league will have a new feel to it this season with Holgate joining. We no longer have the round robin so only the second time we play a league opponent will count.”

“There are probably going to be as many as 3 or 4 teams in contention as we head into the last month of the season. Staying healthy and getting hot at the right time of the year will be key factors.”

ABOUT THEIR SCHEDULE: The Eagles will play county rival Pettisville to start the season on November 26th and will be at Montpelier on December 16th to start their BBC schedule.

ABOUT THEIR SCHEDULE: Hilltop will be at Montpelier for a nonconference tilt in the season opener on November 26th and BBC play will begin on December 16th at home versus Pettisville.

SEASON OUTLOOK: “We have 5 returning letterman with quality playing time in big games. We were competitive and came up short on many games.”

“This group is hungry to win and are willing to do what it takes to be successful. We are quicker this year and the team understands our weaknesses and are trying to turn their weaknesses into strengths.”

“Our weakness this year is going to be our size. We aren’t going to be the biggest team, but what we don’t have in size, we need to make up with in toughness and preparation.”

“We feel that we were competitive enough last year but fell just short. Our ultimate goal is to make a run in the tournament, but we know we have a mountain to climb to get there.”

ABOUT THEIR SCHEDULE: Holgate will host Miller City on November 27th and will make their BBC debut on December 16th when they welcome in Edon.