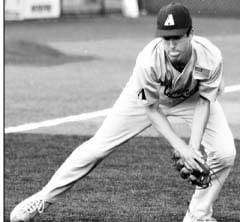 These two NWOAL rivals contended with mother nature as much as each other in this Division III baseball District Semifinal at Defiance. After three rain delays and taking two days to complete the game, Archbold was able to make a 3-0 lead early be enough as they defeated the Bulldogs 3-2 to advanced to the District Final where they faced top seeded Fairview. While the field was being prepared following the first game we entered our first rain delay, this one lasting about thirty minutes. When action finally began Swanton went down in order in the top of the 1st inning. The bottom of the 1st saw Archbold strike quickly, with a Gabe Peterson single that scored Toby Walker to give the Blue Streaks a 1-0 lead. Ian Radabaugh then doubled driving in Jeron Williams and Bryce Williams giving Archbold a 3-0 lead after one inning of play. The next four innings were controlled by each team’s pitchers with the score remaining at 3-0 entering the 6th inning. With Swanton’s first batter of the inning facing a 3-1 count, lightning was spotted in the area and the game went into its second rain delay of Thursday night. After some time, more lightning was seen so the decision was made to suspend the game until Friday with Archbold leading 3-0. When play resumed on Friday, Swanton made this one interesting by scoring two runs late in the contest to cut the Archbold lead to 3-2. The Blue Streaks were able to hold on for the win though and a berth in the District Final on Saturday at Defiance against Fairview. Archbold faced Fairview in a doubleheader earlier in the season with the Apaches taking both games, 5-1 and 9-1.