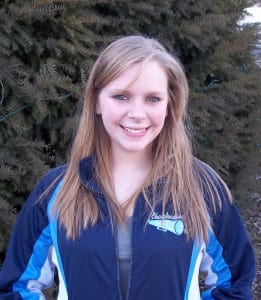 Montpelier High School’s Homecoming Queen Cassandra Rudolph has been selected as one of 30 young ladies across Ohio to compete on the state level for America’s Homecoming Queen. She will be heading to Dayton, Ohio, on April 7 to compete in the contest, which could net her a scholarship if she is a finalist.

She first learned of the contest from her guidance counselor Mrs. Bonney, who gave her information on the contest. The pageant selects schools in varied districts and invites homecoming queens to compete. Cassandra filled out an application, told about herself, and sent in a picture.

From those who sent in applications, only 30 were selected to compete in the Ohio contest. Each girl can compete once only, as the contest does not repeat invitations to individuals.

Cassandra said that as homecoming queen, she was eligible to go to the Autozone Liberty Bowl this past December, and met many other Ohio homecoming queens, but not all of them were selected to participate in the pageant. She is very excited to have been chosen. Once in Dayton, she will go through an interview and a gown competition. Those selected as finalists will also answer on the spot questions. All participants will receive a tiara, a school banner, and gifts made especially for the Homecoming Queen contestants. If she should win in the state of Ohio, she will advance to the national contest. All finalists receive scholarships. She could also be eligible for scholarship money if she wins the most votes from the public through the contest’s America’s Favorite website. Each vote costs $1, but individuals can vote as often as they like. Cassandra’s site is located at (http://www.americashomecomingqueen.com/index.cfm/state-queens/ohio-cassandra-joanne-rudolph-montperlier-exempted-village-high-school/). Votes will be taken through July.

In addition to being her high school’s homecoming queen, this active senior has been involved in track and basketball in the past, and this year she served as a varsity cheerleader for football and basketball. A cast member of the school’s recent production of Sound of Music, she played Elsa, the former fiancée of Captain Georg Ludwig Von Trapp. The part called for her to act mean toward Maria, and she said that it was difficult to behave that way. Cassandra is on the high school choir, and they are heading to a state competition in April.

Cassandra’s interests extend beyond her school career. She recently completed interviews with Adventures with Missions, as she would like to go out into the mission field. She could be eligible for a two week mission trip, or even a nine-month mission trip called Passport Immersions that would take her to Central America, Southeast Asia, and to Africa. Cassie is hoping for the nine-month trip. She will know if she has been accepted for one of their programs in another week or two. She is a member of House of Prayer church in Montpelier, and her faith is very important to her.

She also seeks a career in modeling. She interviewed with Pro-Market Intel agency in Akron, Ohio, and was the only one of over thirty people who was signed on the spot. She will soon begin a series of fifteen classes which will enable her to go out and do work such as handing out products in malls, promotional work, runway work, print, and film. She was told that seventy-five percent of the industry is personality and relatability, and Cassandra’s exuberant personality shines forth.

This enterprising young lady plans to attend Spring Arbor University in Spring Arbor, Michigan, and plans to study either psychology or social work. She would like to study for missionary work as a minor. Her desire is to be out in the field helping others instead of being confined behind a desk all day. Cassie has been employed at Miller’s New Market for almost a year and a half. Her hobbies include riding her bicycle, spending time with nature at the covered bridge at the fairgrounds, hanging out with her friends, reading her Bible and going to church.

She wants to thank her school for its support and to Mrs. Thorp, Mrs. Bonney, and Mr. Brigle in particular. She said that she would not have been able to go to the Autozone Liberty Bowl without their help. She said that they always are there to help her and that her school is her backbone. Cassandra is thankful for her parents, Terrance and Cynthia Rudolph, and her older sister Julia. They are always there for her. She is blessed with many good friends including Katelynn and Emily, who are particularly supportive. Says Cassie, “I wouldn’t be where I was today, wouldn’t have had this chance” without all of those who encourage and support her. “What a blessing I’ve been given.”

It seems to this reporter that it is Cassandra Rudolph who will be the blessing in this world.

Be the first to comment on "Montpelier’s Rudolph: Contestant In America’s Homecoming Queen Competition"