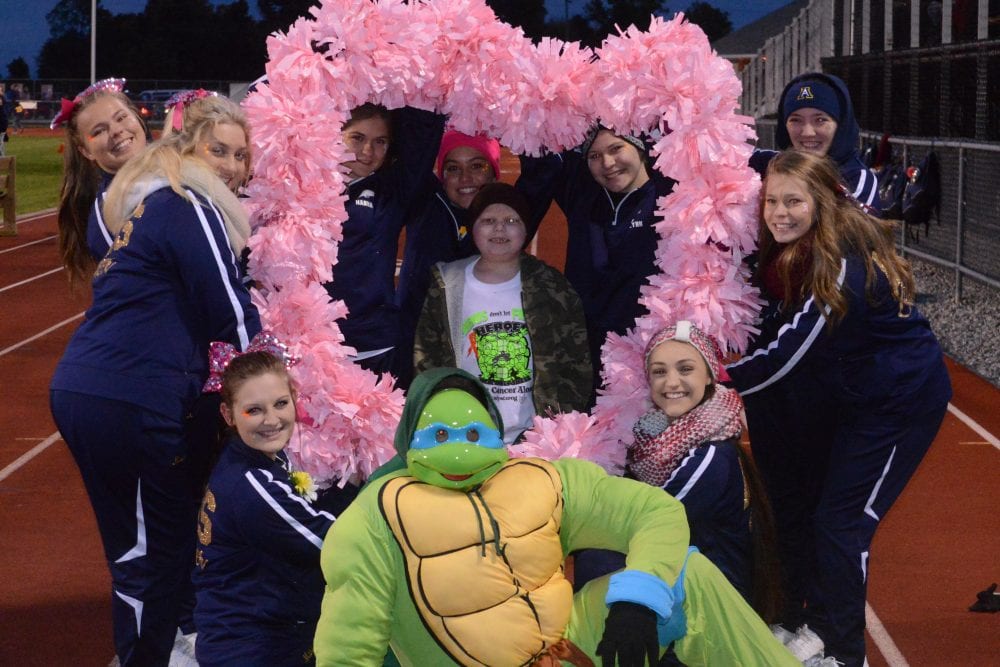 On the evening of October 21, a special pregame benefit dinner was held in the cafeteria of the Archbold High School on behalf of seven year-old Cody Cornell. Born with Goldenhar’s Syndrome, Teenage Mutant Ninja Turtle wannabe Cody has been deaf since birth. Although he lives in Delta, he attends second grade in Archbold. In March of this year, Cody’s life took an unexpected turn with a diagnosis of leukemia. With that, both Delta and Archbold have taken to raising funds for his treatments, which are scheduled to continue through 2019. On the evening of October 21, with the Panther Pack of Delta in town to take on Archbold, the western sidelines played home to the Blue Streak backers, the eastern bleachers were occupied by the Delta faithful, and everyone in the stadium was pulling for the third team in the house…the one called #CODYSTRONG.

The fundraising continued shortly after attendees entered the stadium, with a benefit bake sale offering an exchange of slices of high-carb heaven for freewill donations. As expected, the ‘sold-out’ sign eventually had to be raised, but the efforts did not stop there. In the stands were members of the Teenage Mutant Ninja Turtle #CODYSTRONG squad, whose ‘Dash for Cash’ raised additional funds in a way that could only be carried out by heroes in a half shell.

Running parallel to the hometown boys, Cody was brought into the stadium on a Gator bedecked with the face of a Teenage Mutant Ninja Turtle, and introduced to the crowd on both sides of the field by the PA announcer. Pulling to a stop on the Archbold sideline, Cody broke out into a huge smile as he waved to the people in the stands that were giving him loud applause.

Cody was about to join family and friends in the seats when the Archbold Blue Streak Cheerleading squad stepped in. They had something planned that, in all my years of covering high school sports, I had never seen. With a member of the Teenage Mutant Ninja Turtle #CODYSTRONG squad reclining in front, the cheerleaders entered a special formation that ensconced Cody in the middle, while the cheerleaders used pink pom-poms to create a heart frame for the star of the evening.

When a community comes together for one of their youngest citizens, it is indeed a special occasion. When that community is joined by another, ‘special’ takes on a whole new meaning…the transcendence of love.