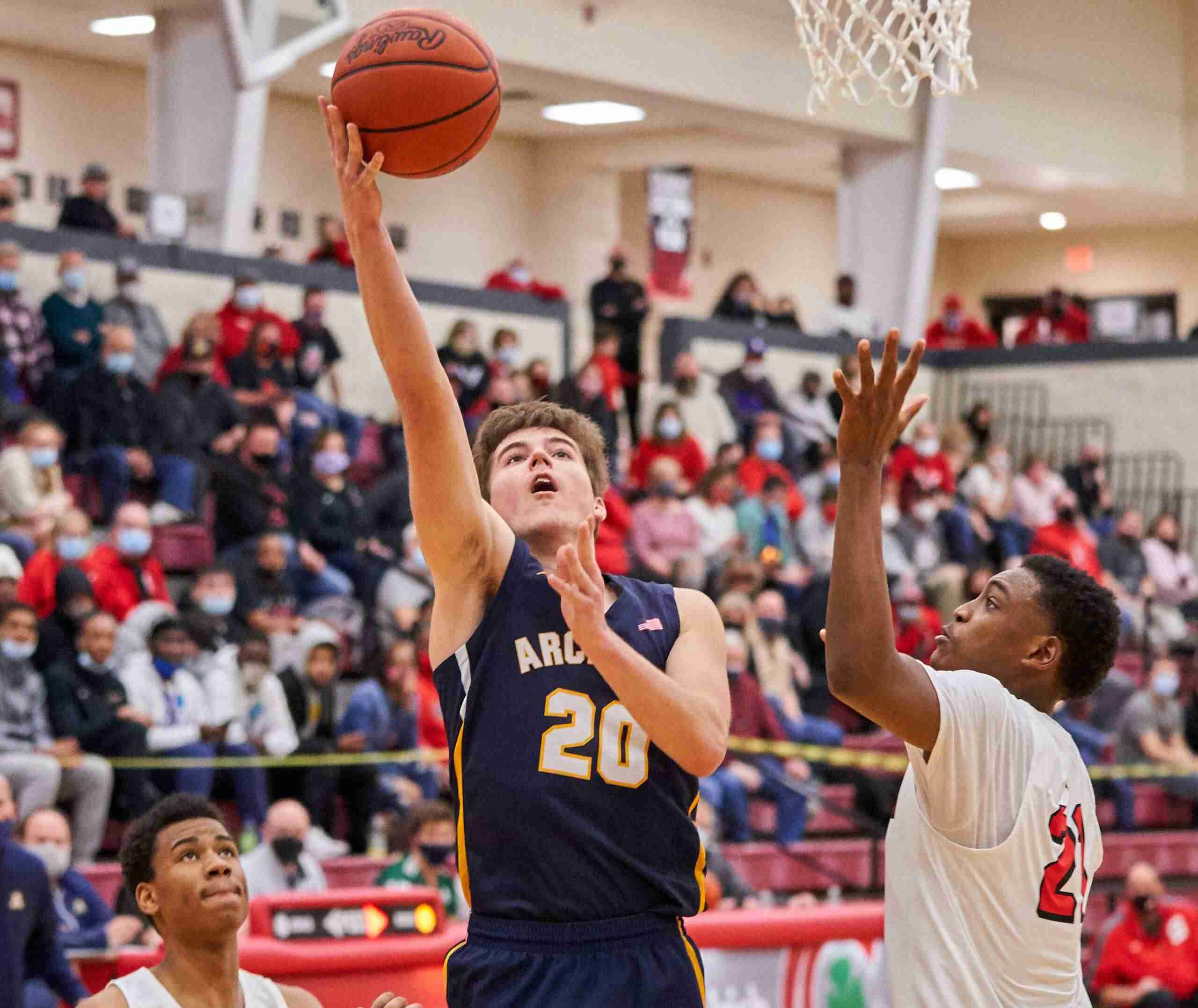 GO AHEAD BUCKET … Austin Roth converts a layup to give the Buestreaks a 47-46 lead after an offensive rebound by DJ Newman. (PHOTO BY RICH HARDING, STAFF)

TOLEDO, OHIO-After trailing 42-38 starting the fourth quarter, the Bluestreaks surged to take a 56-47 lead with 1:26 to go and held off a late rally by the Cardinals to win the Division III district championship at Central Catholic High School.

Archbold scored the first seven points of the final stanza as Austin Roth nailed a triple, Noah Gomez had a bucket, and DJ Newman hit a jumper in the lane to give Archbold a 45-42 lead.

After a timeout, Stritch responded with a deep three from the top of the key by Jhaiden Wilson to tie the game at 45.

The Cardinals would get a free throw to take the lead before a layup by Austin Roth off an offensive rebound by Newman put the Streaks back in front at 47-46.

Archbold continued to increase their lead with another trey from Alex Roth, Ashton Kammeyer and Newman had back-to-back field goals, and after Alex Roth was 2/2 at the free throw line the Archbold lead was now 56-47.

Stritch would not go quietly as Dewayne Morehead, who had nine points in the fourth, scored a quick five points sandwiched around a missed one and one by Archbold to make it 56-52.

Archbold would miss another one and one and again the Cardinals took advantage with Romel Hightower scoring inside to trim the lead to 56-54.

With 24.9 to go, Austin Roth split a pair at line for a 57-54 Archbold lead. Wilson would force up a desperation three-pointer that was off the mark and after a couple offensive rebounds by Stritch, Morehead converted to make the score 57-56 but only 1.3 seconds remained.

Newman was fouled on the ensuing inbounds and hit both free throws to seal the win for Archbold.

Gomez got Archbold off to good start by hitting two treys in opening quarter on his way to eight points in the quarter to help Archbold take a 14-11 lead.

Archbold increased the lead to 24-16 before Stritch would end the first half on a 13-0 run, featuring seven straight points by Hightower, to take a 29-24 lead at halftime.

Stritch was able to build their lead to 34-28 in the third quarter before five unanswered points by Archbold as Alex Roth hit his first three-pointer of the game and Newman added a bucket to make it 34-33.

Stritch then went on an 8-2 scoring spurt of their own to grab a 42-35 lead in the waning moments of the third quarter.

Newman ended the third quarter by connecting from downtown to give Archbold the momentum going to the fourth quarter as the lead was cut to 42-38.

The Bluestreaks dominated the boards in the second half with an 18-7 advantage and finished the game with a 27-21 rebounding edge.

Archbold (21-4) will take on Ottawa-Glandorf (18-4) in the regional semifinals at Elida on Wednesday night at 8pm.

The Bluestreaks and Titans met very early in the season on December 19th with Ottawa-Glandorf winning 56-37.

Be the first to comment on "D3 BBK District Final: Archbold Holds Off Cardinal Stritch To Win District Title 59-56"