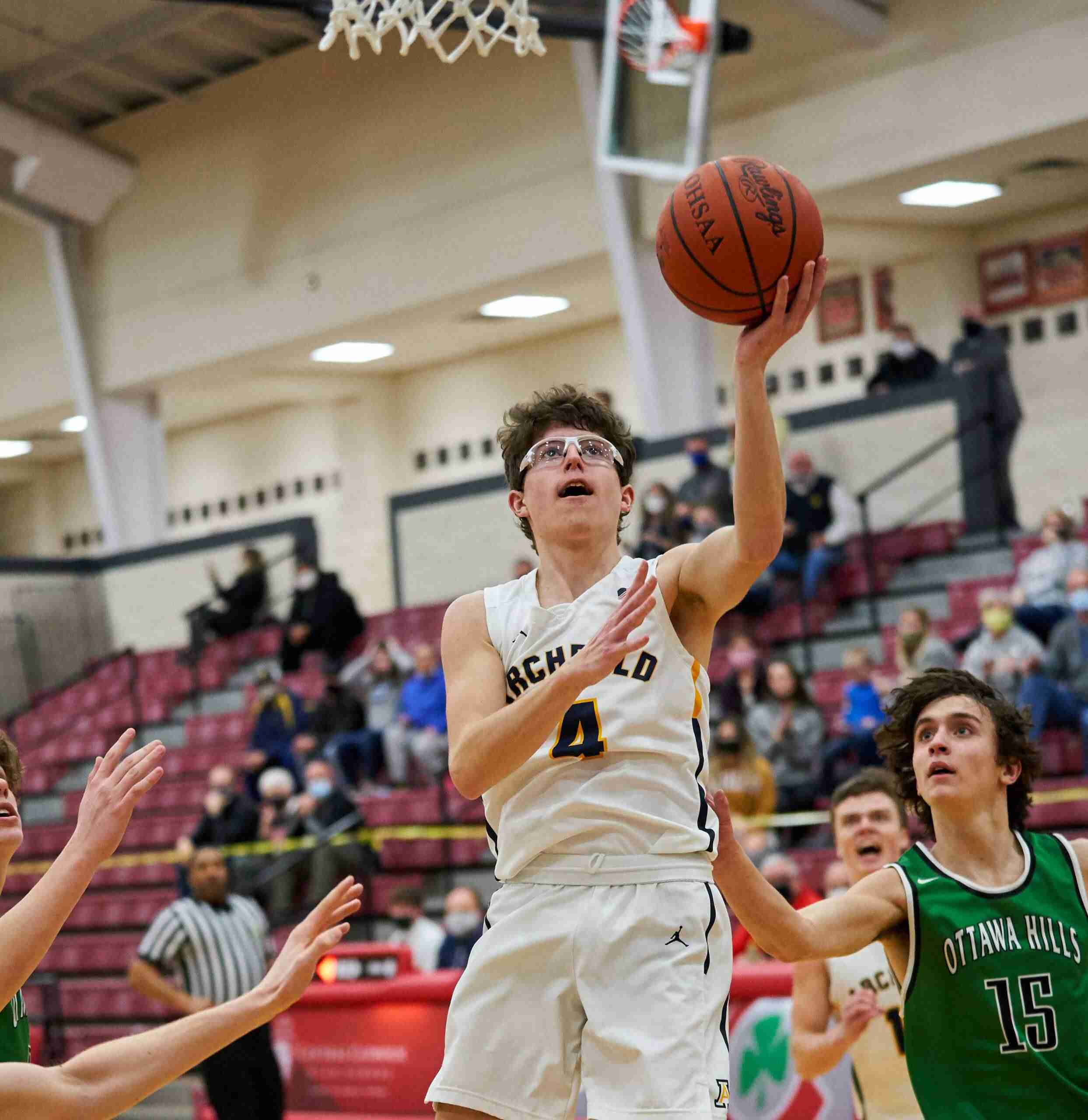 BLUESTREAK SOPHOMORE … Archbold guard Alex Roth finishes at the basket in the second half of Thursday night’s win over Ottawa Hills. (PHOTO BY RICH HARDING, STAFF)

TOLEDO, OHIO-The first half of the Division III district semifinal between Archbold and Ottawa Hills was the tightly contested game you would expect. The opening half featured nine lead changes with the Bluestreaks taking a 20-19 lead at halftime.

The third quarter was a different story as Archbold outscored the Green Bears 24-2 on their way to a 56-37 win at Central Catholic High School.

Ottawa Hills took an early 4-0 lead before Noah Gomez would get the Bluestreaks on the board with a triple to make it 4-3.

The back and forth first half began then with two free throws by DJ Newman to give Archbold their first lead at 5-4.

Ottawa Hills would surge to a 9-5 lead thanks to a three-pointer by Brayden Miller and then a bucket from AJ George.

Archbold responded with a 7-2 run as Newman hit a jumper followed by five straight points from Alex Roth to give Archbold the lead back at 12-11.

Eli Van Slooten ended the quarter for Ottawa Hills by scoring inside to give the Green Bears a 13-12 advantage.

The lead continued to exchange hands in the second quarter with five lead changes and after Roth went the length of the floor for a layup after a Green Bears turnover, Archbold had a 20-19 halftime lead.

Trey Theobald started the third quarter onslaught with a trey followed by a bucket from Roth to make it 25-19.

After the first of three timeouts in the quarter by Ottawa Hills, George went 2/2 at the foul line for the only Ottawa Hills points in the third.

Noah Gomez would add a three-point play and Roth scored again to push the lead to 30-21.

The Bluestreaks continued to pour it on as Newman scored four straight points, Austin Roth nailed a three-pointer, and Theobald had a bucket to make it a 39-21 game.

Archbold ended the quarter with a basket from Newman and Austin Roth dialed up another triple to cap off a 19-0 run by Archbold.

Ottawa Hills tried to claw their way back with a 10-4 spurt to start the final stanza as George tallied eight points during the stretch including back-to-back shots from long range to cut the lead to 48-31.

Archbold responded with a triple by Theobald off a Bluestreak offensive rebound to make the score 51-31 and ending any thoughts of a Green Bear comeback.

Gomez led the Bluestreaks with 12 points, Alex Roth had 11, and Newman added 10.

Stritch was a 75-65 winner over Eastwood in the first semifinal of the night.

Be the first to comment on "D3 BBK District Semifinal: Third Quarter Explosion Lifts Archbold To 56-37 Win Over Ottawa Hills"