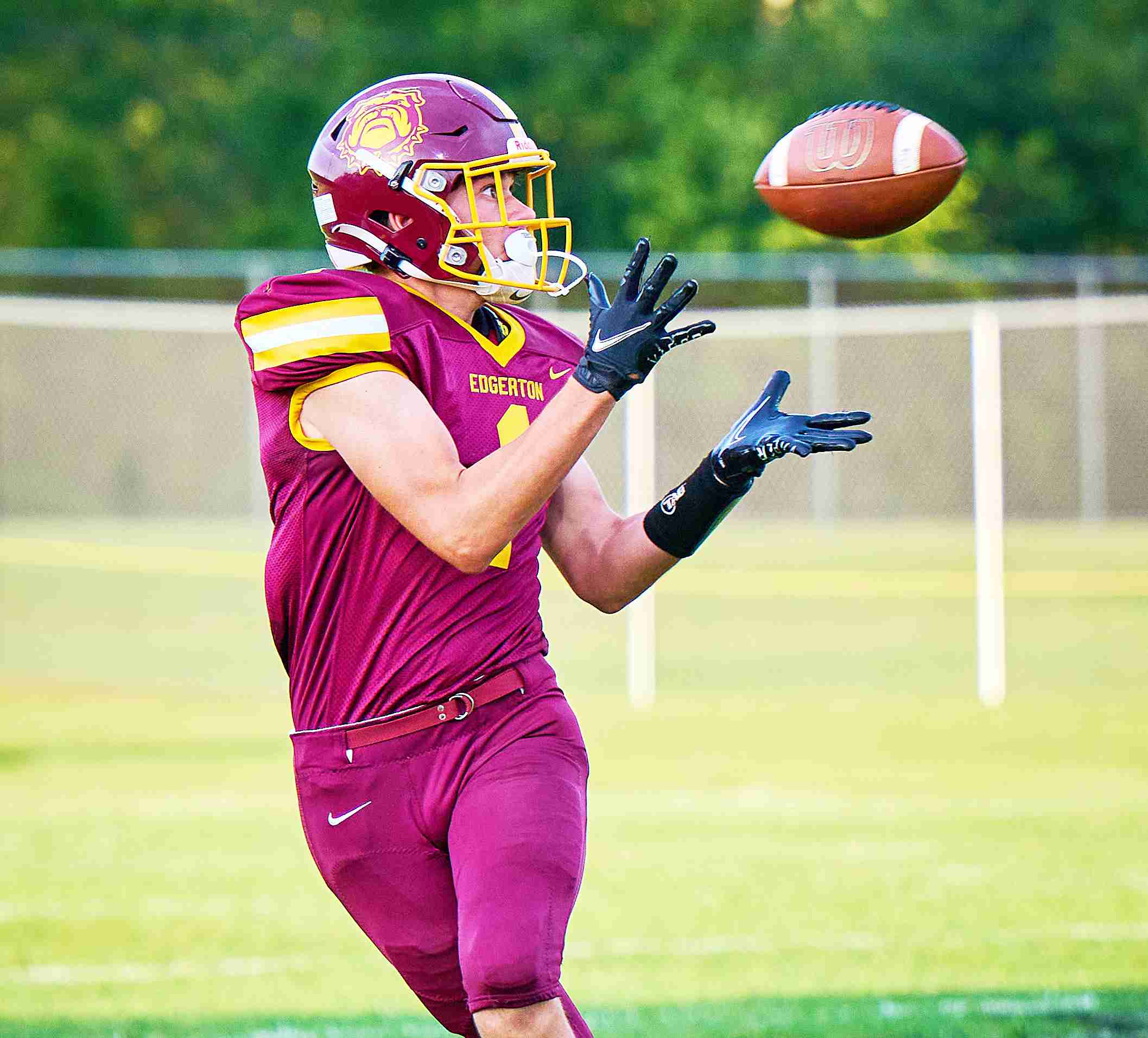 PASS AND CATCH … Riley Kollar collects a 36-yard reception from Corey Everetts in the second quarter for Edgerton. (PHOTO BY RICH HARDING, STAFF)

EDGERTON – The underdog Locos kept the game close until Edgerton quarterback Corey Everetts hit Kadyn Picillio on 59 and 41-yard scoring strikes in the second quarter as Edgerton pulled away for a 35-0 win.

Everetts added two more touchdown passes and ran for a score as he had 350 yards of total offense. Picillio ended up with seven catches in the game for 216 yards and three scores.

Montpelier quarterback Grant Girrell was 21/40 passing for 121 yards and two interceptions in the loss.

ARCHBOLD – After Lake (0-3) took a 14-10 lead early in the second quarter, the Bluestreaks answered with 28 straight points to take control on their way to a 52-28 win.

Carson Dominique accounted for two touchdowns on the ground during that stretch and he also was on the receiving end of a 55-yard TD toss from Cade Brenner.

Archbold piled up 617 yards of offense paced by Brenner’s 19/26 passing for 310 yards with a touchdown and Dominique ran 21 times for 212 yards and four scores.

FREMONT – Gage Kidston tossed a four-yard touchdown pass to Samuel Moore in the first quarter and the Eagles rolled to a 38-8 win at Fremont. Jake Turner added a defensive touchdown with a 40-yd interception in the first half to give North Central a 24-0 lead at halftime.

Joey Burt led the Eagles ground attack with 19 carries for 87 yards and two touchdowns while Cam Laney added 90 yards on 12 totes with a touchdown.

STRYKER – Stryker put 30 points on the board in the second quarter and kept Morenci out of the end zone on the game’s final play to preserve a 44-38 win.

The teams combined for 813 yards of total offense as Stryker was paced by quarterback Jacob Cadwell who threw for 284 yards, ran for 91, and had six total touchdowns.

EDON – The Bombers blew open a close game with a 22-point second quarter as they picked up their first win of the season.

Edon rolled up 358 yards of offense led by Kyler Sapp who was 15/26 for 267 yards and six touchdowns total with Caden Nester hauling in six of those passes for 170 yards and a touchdown.

PAULDING – The Delta ground attack was unstoppable led by Jeremiah Wolford with 173 yards and four touchdowns as Delta rolled past Paulding in their final nonconference game.

The Delta defense also added to the scoring onslaught with a safety, an interception return for a touchdown, and held Paulding to just 86 yards of offense

ANTWERP – Carson Altimus fired three touchdowns and Reid Lichty ran for two more as part of a 35-point first quarter in a 65-8 win over Hilltop.

The Cadets registered their first score of the season on a 61-yard touchdown pass by Cameron Schlosser to Dalton Bauer in the fourth quarter.

OTHER SCORES: (no statistics)