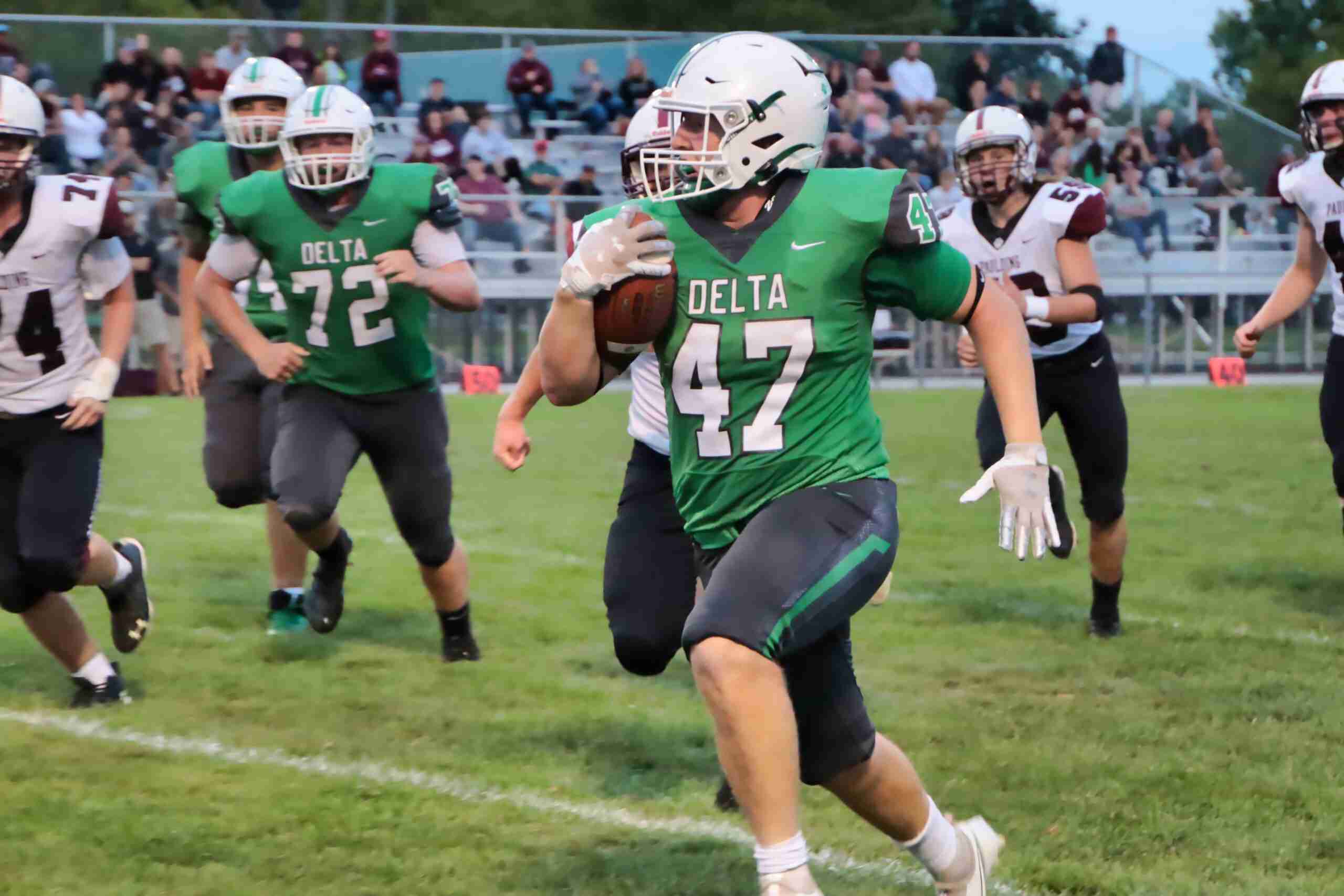 OPEN FIELD AHEAD …Jerremiah Wolford gets by the Paulding defense one of his ten carries in the game for Delta. (PHOTO BY JACOB KESSLER, STAFF)

DELTA – DJ Davis returned the opening kickoff 98-yards for a touchdown as Delta rolled to a 49-0 non-league win at Panther Stadium.

The score remained 7-0 until the second quarter when Josh Tresnan-Reighard scored on a four-yard run to extend the lead to 14-0.

The Panthers, who scored 27 points in the second quarter, added a five-yard TD from Bryar Knapp, Davis added a 20-yard touchdown scamper, and Tresnan-Reighard found the end zone again on a seven-yard run to give Delta a 34-0 lead at halftime.

The Panthers closed out the scoring in the final quarter as Tresnan-Reighard scored from two yards out and Landon Lintermoot went 49 yards for their final score of the night.

Delta rushed for 264 yards led by Tresnan-Reighard with 74 yards on 15 carries and three touchdowns and Jeremiah Wolford added ten carries for 61 yards. Quarterback James Ruple was 5/7 for 98 yards and a touchdown for Delta.

Lake answered Newman’s 43-yard touchdown pass to Gavin Bailey in the first quarter with a one-yard TD run by Sam Scifers to tie the game 7-7.

The Streaks took control in the second quarter as Newman fired scoring passes to Bailey and Karter Behnfeldt and in between those he picked off a pass and returned it for a score as the Archbold lead ballooned to 28-7 at the break.

Carson Dominique and Lucas Dominique added scoring runs of nine and one yard respectively in the second half.

Archbold rolled up 474 yards of offense led by Newman who threw for 188 yards and Carson Dominque ran for 125 yards on 15 attempts. Bailey led the receivers with five receptions for 123 yards.

UP NEXT: Archbold (3-0) will hit the road next week as they travel to Bryan (2-1) for their NWOAL opener.

WEST UNITY – Antwerp put 30 points on the board and held Hilltop to just eight yards of total offense in a 56-0 win.

Reid Lichty started things for the Archers (2-1) with a 12-yard TD run, followed by four touchdown passes by Carson Altimus, and then it was Lichty with a one-yard touchdown run to give Antwerp a 43-0 lead at halftime.

Altimus finished 15/21 for 260 yards and four touchdowns while Lichty led the ground game by rushing for 75 yards on 16 carries with three scores.

The Hilltop offense was led by quarterback Devin Dempsey who was 5/10 for 33 yards and he recorded five tackles and an interception on defense.

UP NEXT: Hilltop (0-3) travels to Ft. Loramie next week for a neutral site game versus New Miami with kickoff at 6pm.

SHERWOOD – A twenty-point first quarter set the tone for the Golden Bears in a 42-12 non-league win.

A Korbin Shepherd five-yard TD run followed by a pair of touchdown passes stake Bryan to a 20-0 advantage.

Shepherd added another five-yard run for a touchdown before Kepler went seven-yards to Sam Herold for a score to help Bryan build their lead to 35-6 at halftime.

Kepler found Troy Wolfe for an 85-yard touchdown strike in the third quarter complete the scoring for the Golden Bears.

Kepler ended the game 18/24 for 274 yards and four TDs, Shepherd carried the ball 20 times for 77 yards, and Wolfe had six receptions totaling 131 yards and a touchdown.

UP NEXT: Bryan (2-1) starts league play next week when they host the undefeated Archbold Bluestreaks (3-0).

NAPOLEON – Wauseon missed a field goal at the end of regulation but bounced back with a one-yard touchdown by Bryson Stump to get the overtime win.

Both teams scored quickly to start the with Wauseon’s Sam Smith returning the opening kickoff 92 yards for a touchdown and Napoleon scored on a halfback pass that covered 45 yards to make it 7-6 Wauseon after the extra point was blocked.

The scored stayed 7-6 until the Indians engineered their best drive of the night ending with an Elijah McCleod 27 TD pass to Jude Armstrong to make it 14-6 with 6:15 left in the third quarter.

The Wildcats rallied to get a touchdown and two-point conversation with 5:14 left in regulation to tie the game at 14-14.

After missing a field goal as time expired, the Indians had the first possession of overtime and Stump eventually punched it in from one yard out to make it 20-14 after the Wauseon extra point was blocked.

Napoleon’s overtime possession ended as Stump broke up a pass on fourth and three to give Wauseon the win.

McLeod ended up 24/34 through the air for 264 yards with Jonas Tester grabbing ten passes for 133 yards.

UP NEXT: The Indians (2-1) face a big challenge next week as they make the trip to Liberty Center (2-1) for their NWOAL opener.

HICKSVILLE – Edon is off to their best start since 2002 after romping to a 60-6 win at Hicksville. No stats were reported. UP NEXT: The Bombers (3-0) are slated to start TAAC play next week at defending league champion Northwood (1-1).

SWANTON – The Bulldogs had no answers for the visitors from Toledo as the Rams built a 36-0 lead at the break on their way to a 49-0 victory. No stats were reported. UP NEXT: Swanton (0-3) will travel to Hamler and face Patrick Henry (2-1) to start NWOAL play.