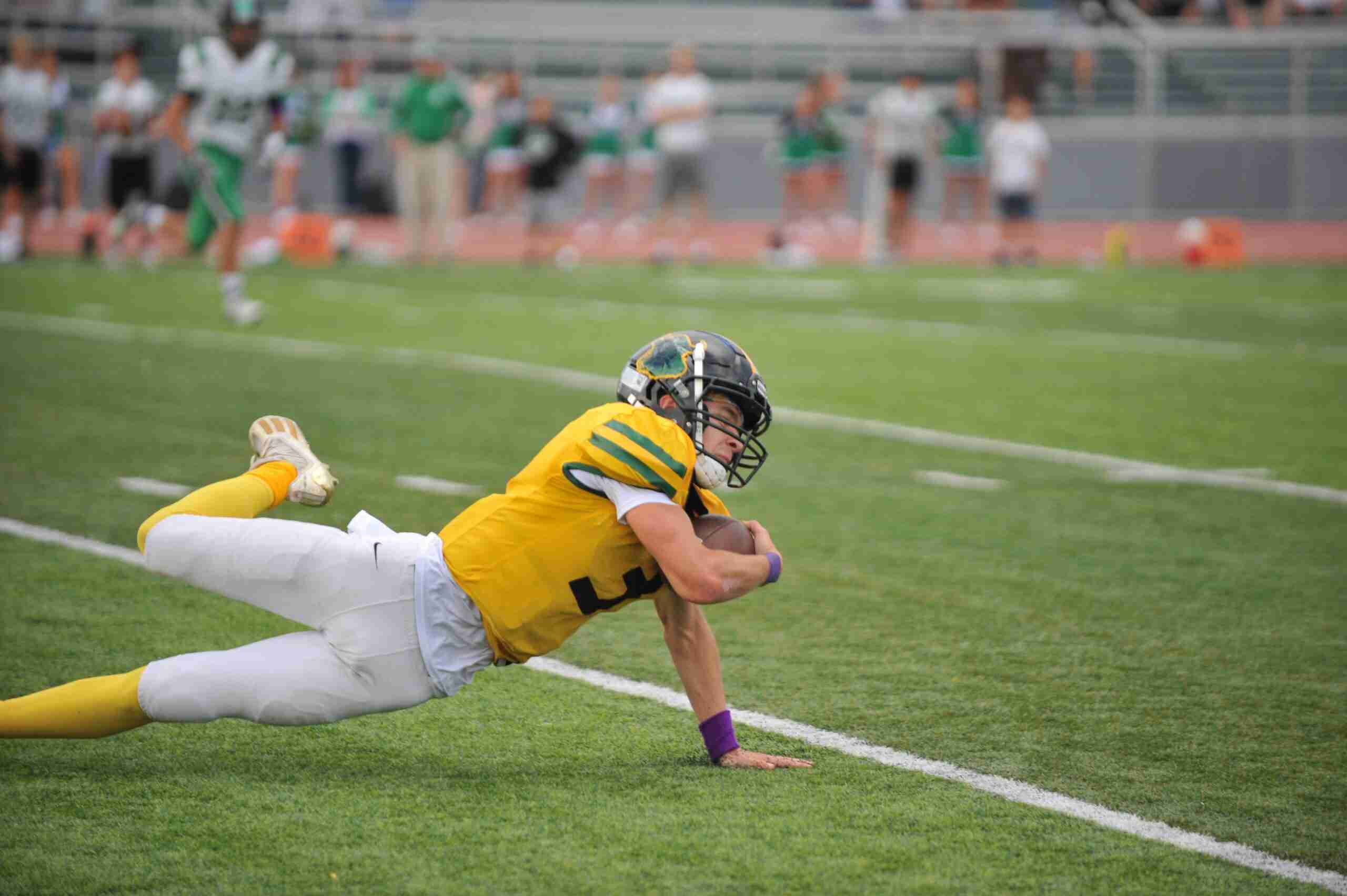 TRIPPED UP … Payton Boucher is brought down on a rushing attempt on Evergreen’s first possession of the game. (PHOTOS BY JACOB KESSLER, STAFF)

METAMORA – Ottawa Hills connected on two long touchdown passes and added two long TD runs as they cruised to a 49-19 win on the road over Evergreen.

The Green Bears scored via the big play on their first possession when quarterback Chase Miller went 84 yards to AJ George to give Ottawa Hills a quick 7-0 lead.

The Vikings ensuing possession included a 41-yard pass play between Payton Boucher and Conner Hewson, but the drive stalled due to penalties giving the ball back to the Green Bears.

Ottawa Hills would put together a nine play, 71-yard drive ending with an 18-yard TD run by Issac Tavtigian to extend the lead to 14-0.

The second quarter scoring started following another long drive by the Green Bears, this one covered 56 yards in ten plays, as Jack Perozek scored from three yards out to make it a 21-0 game.

Evergreen responded in just three plays with Boucher going up top to Riley Dunbar for a 70-yard scoring strike to get the Vikings on the board and make the score 21-7.

Back came Ottawa Hills though with an 11 play, 75-yard march ending with a George nine-yard scoring run to give Ottawa Hills a 28-7 lead at halftime.

Ottawa Hills went back to the big play to start the second half as Miller went 67 yards to Tavtigian after some penalties had backed up Ottawa Hills to put them ahead 35-7.

Evergreen battled back with Boucher scoring on a 21-yard run to cap off an 80-yard drive by the Vikings to cut the lead to 41-13.

The Green Bears had a quick response though with Tavtigian rumbling 59 yards for a TD in the third and Perozek scored on a 44-yard run in the final stanza.

Boucher gave Evergreen their last TD of the night on a one-yard run in the fourth quarter.

Ottawa Hills finished the night with 523 yards of offense led by Miller (8/9 for 221 yds, 4 TDs), Tavtigian ran for 115 yards on eleven totes and George had five catches covering 146 yards.

Boucher was the catalyst for the Vikings offense as he rushed for 110 yards on 21 carries and passed for 249 yards on 12/22 throwing and accounted for three total touchdowns.

Be the first to comment on "FULTON COUNTY GAME OF THE WEEK: Big Plays Carry Ottawa Hills To 49-19 Win At Evergreen"