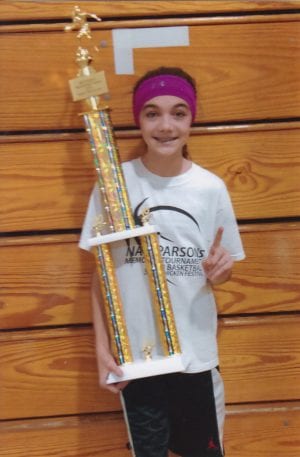 On July 6th-9th, Jayma Bailey, a 6th grader at Hilltop Elementary School, attended the McCracken Basketball Camp hosted at the Adrian College in Adrian, Michigan. While there, she was evaluated and competed to make it to the 27th Annual McCracken Super Shootout in Fort Wayne, Indiana. After receiving a letter stating she had placed first in the competition, she was invited to attend the finals. Jayma gladly accepted.

On October 16, 2016, Jayma competed against 22 other girls in her age group. The competition consisted of layups in a minute, perimeter shooting in a minute, and 10 foul shots. After being told that she will go first, Jayma got very nervous. Apparently, being under pressure to go first, she set the bar very high for the other girls competing. Scoring 27 layups, 15 perimeter shots, and 9 out of 10 foul shots gave her the first place trophy. Jayma was so excited when they announced her name she could hardly believe it. All of her hard work and dedication has definitely paid off.

Jayma would like to thank Chad Nofziger, her Hilltop Basketball Coach of 3 seasons, Bill Geis, Hilltop Varsity Girls Basketball Coach where Jayma has been the manager for 2 years, and all of her coaches at Trine University, where she has played for the past 2 years.

Jayma is the daughter of Tonya Bailey and Dustin Bailey of West Unity and sister to Drew and Kennedy.