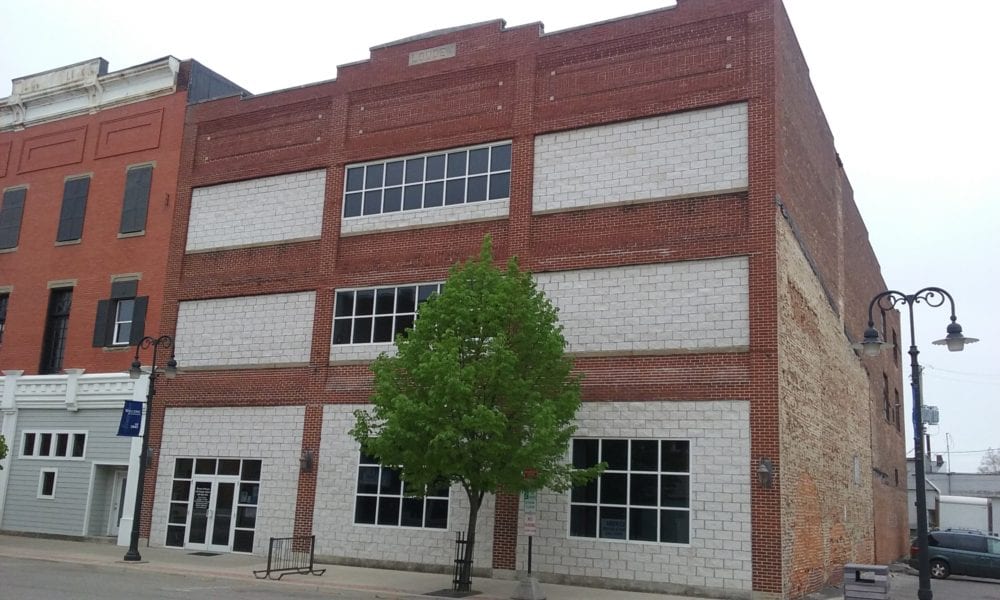 Montpelier’s Moose Lodge has had many homes over its 100-year history. The first was at 304 ½ W. Main St. in 1916. The Moose swelled with members in the 1920s and moved into the third floor of the Louden Building (pictured) in 1925. The original room served as the lodge once more in the 1930s when membership shrunk due to the Great Depression.

It hasn’t always been a bed of roses, but Montpelier’s Moose Lodge is turning 100.

The lodge is celebrating the anniversary all week with various special events. The centennial gives the local members a chance to celebrate the perseverance of the club and the true purpose of the organization.

During the Roaring 20s the lodge hosted dances and boxing matches.

The Great Depression was the first major threat as the tattered economy caused many members to quit. The loss of members forced the club to move back to its original home in 1934.

In 1935 membership began to grow again and by April 1939, the Moose bought out the back portion of the Oddfellows Hall at 105 South Jonesville Road (Pure Rays). The lodge moved to its new home in June and by October 1943 had paid off its mortgage.

The lodge moved again after the purchase and refurbishing of the old Leader Enterprise building at 325 N. Jonesville St., in 1983. The lodge spent 20 years at that site before constructing the Family Center at its current site.

The reason for growth is simple, Administrator Bob Gerig said.

The food service is open to members only, but memberships can be had for $40 for men and $20 for women. Each new member gets $20 in Moosebucks which drops the net cost, Gerig said.

“If we don’t take care them it’s our fault,” Gerig said. “We like to give back to members.”

Like any club such as the Masons or Elk, there are rituals and pomp and circumstance, but the driving force is about a group of orphans and elder members who are supported through the dues of the lodges.

The Loyal Order of the Moose began in the late 1800s but didn’t gain a permanent foothold in the nation until the early 20th century when James J. Davis – who later would serve as Secretary of Labor to three Presidents, then 14 years in the U.S. Senate – agreed late in 1906 to take on the job of recruiting members into the then-faltering Moose organization, on the basis of eventually using members’ pooled resources to create a home and school where dependent widows of Moose members could take their children.

That idea became Mooseheart, a 1,000-acre complex 38 miles west of Chicago where orphans are given a chance to live and grow.
Mooseheart is a passion still for the Montpelier Lodge members. Every night at 9 p.m., members gather in a special room and face west toward Mooseheart in symbolic unity with children who are saying their prayers. A painting of a child kneeling by a bed represents all the children.

Current Governor Mike McKenzie loves to talk about the place and what it means.

“We are all about God,” McKenzie said. “They have all different types of religions there.”

The room also features a star-shaped light with the image of a child that McKenzie found in storage.

“They didn’t even have it hanging up any more,” McKenzie said. “I grew up with it and I want the other kids to grow up with it. So I got it hanging back up.”

A painting of Mooseheart does not do it justice, he said. He can remember his parents taking a trip to the community so he could see it in person.

The community has been helped immensely by the Lodges of Ohio, which McKenzie estimates has donated millions of dollars toward improvements, especially to its football field.

Moosehaven, known as the “City of Contentment,” is in Orange Park, Florida, only 15 miles south of downtown Jacksonville. Beautifully situated on a wide expanse of the St. Johns River in northeast Florida, the 72-acre campus has been home to members of the Loyal Order of Moose and Women of the Moose since 1922.

As a Continuing Care Retirement Community, Moosehaven offers independent living for seniors 65 years of age and older, and promotes an active lifestyle on a campus full of amenities and services. Moosehaven’s LifeCare Center provides all levels of health care. (http://www.moosehaven.org/)

While there have been some struggles, the current administration has the club on the right track and the lodge has a bright future. For more information, call 419-485-3984.