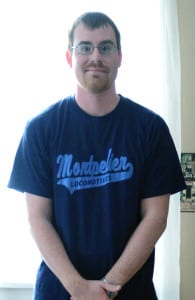 Robotics is an ever growing field, with machines trusted to handle more tasks each and every day. Not only that, but as technology becomes more and more advanced, so too does the depth of the human imagination.

Students at Montpelier High School have gotten an early start tapping into that imaginative stream, thanks to the school’s Robotics program.

Originally devised four years ago by science teacher Matt Cullen, who has since accepted a position at a different academic institution, the course still follows the basic direction he left behind. The program is now being run by Lester Orndorff, a science teacher for the school. While quite knowledgeable in what he is teaching his Robotics class, there have been instances in which he is learning right along with his students.

“I’m learning all sorts of new stuff, too.” Admitted Orndorff.

This is Orndorff’s first year teaching Robotics at Montpelier, and just his second teaching at the school overall. Graduating from the University of Toledo in 2013, the Wauseon native holds a bachelor’s degree in Biology, and a master’s in Education. Still, he considers himself an interested party in most branches of science, with the technological aspects of the field in particular drawing his attention.

This was a critical factor in Orndorff stepping into the role of Robotics Instructor. Another was his love of imagination, and seeing his students discover that feeling for themselves.

“If they can think of it, chances are that they can build it.” Orndorff stated. “If you have this idea, why not build it.”

One of the first ideas this year’s class brought to life was to create a robotic game of dodgeball. Robots designed by the students fired ping pong balls at one another, suffering elimination if hit. The project was a step in a new direction for some of those in the program.

“It was something they hadn’t done before.” Explained Orndorff.

Programming robots to do things, like playing dodgeball, may seem like an impossible task. Yet, if one has any experience programming with Java, a common language used in developing websites, then they are already off to a great start in understanding how to do so. Orndorff teaches his students how to craft If-Then Statements, which tell the robot what actions to take once certain conditions have been satisfied.

For example, if one wished for a mobile robot to turn left when faced with an obstacle, all they would need is a touch sensor and an If-Else Statement. The sensor will inform the machine when its path has been impeded. Using an If-Else Statement, could create a command stating that if something gets in its way, it would then need to turn to its left to avoid the obstacle.

There are also ways in which a student can gain more control over their creation. Using software from a robotics company known as Tetrix, robots can be controlled through the use of an R.C. controller.

With the various methods of creating and controlling their robots, it becomes easier for students to realize their visions from when they began to build their respective machines. Allowing for a more vivid realization of their plans is one of the things Orndorff enjoys most about the class.

“I love seeing the students’ ideas come to life.”

Some of those ideas will come to life on a National stage come April. That is when the National Robotics Challenge (NBC), held in Marion, OH will take place. There are several different events in which students can compete, with a cap of three placed on each machine. Members of the Montpelier Robotics class are currently working in pairs to build their entrants into the competition.

Given the high volume of competitors making their way to Marion, the contests are sure to be difficult ones. Still, Montpelier students have just as much of a chance to turn some heads as another other school present at the event.

All they need is a bit of imagination.