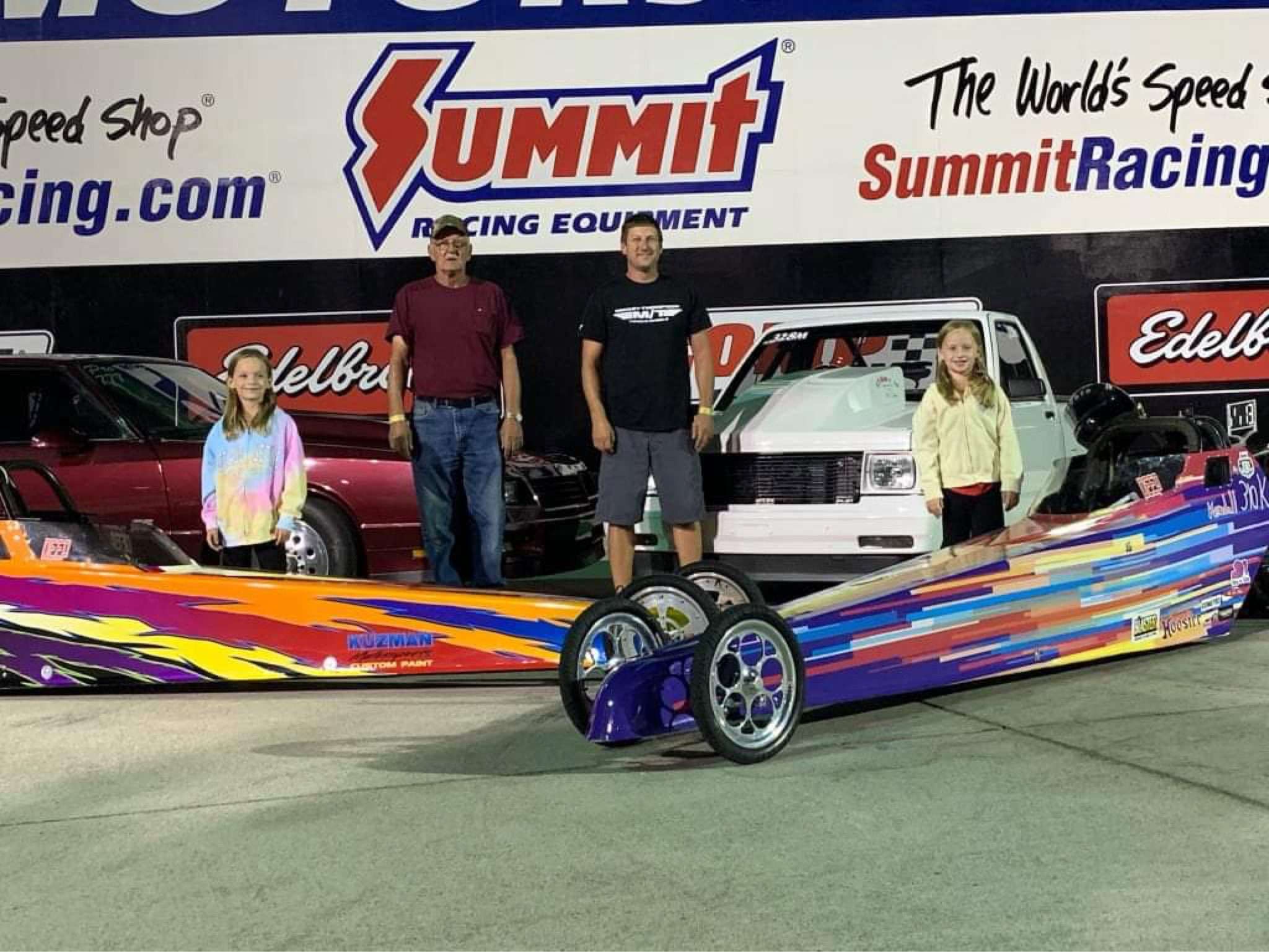 When three generations are present in a family, and one is bound to be revolutionary.  And that is exactly what is happening in the Moreland family.

Ed Moreland, his son Mark Moreland, and Mark’s 7-year-old twin daughters, Callie and Kendall, are three generations of bracket racers. Bracket racing is a form of drag racing that allows for a handicap between the predicted elapsed time of the two cars over a standard distance, typically within the three standard distances (1/8 mile, 1,000 foot, or 1/4 mile) of drag racing.

Twins Kendall and Callie were six years old when they started racing. This year, Kendall has won two races and was featured at the NHRA race at Summit Motorsports Park for being the top two in points. The girls win trophies, and they get points in their class.

Kendall and Callie had to get an NHRA competition license, which means they had to make so many passes on the track without any issues.  It is a learning curve because the cars the girls drive are narrow.

They wear full fire suits, a Hans device for their neck (a Hans device is a head restraint, a safety device in motorsports.), and a full-face helmet. Callie says her favorite part about racing is winning trophies.

They all own their vehicles, and all of those vehicles are gas-powered. Racing starts in April and goes till October. They have a Halloween Classic Race at Summit Motorsports Park in Norwalk, Ohio, for an end-of-year race they do.

The girls were done about two weeks ago as they don’t run their class. Ed and Mark, however, will race at the Halloween classic. Mark races a 1986 Chevy S10, and Ed races a 1987 Monte Carlo SS.  Mark’s mom is Robin Moreland, and she is with them every weekend to support all 4 of them.

They go to the track almost every weekend during the season.  Ed and mark run a class called Pro-Eliminator. If they win their class, it is $1500 for the winner, and if they win in the points series, it’s $10,000.

The Morelands do not have sponsors at this time. But Mark is trying for the next season to get sponsors for Kendall and Callie.

They also go to Martin Michigan at 131 Motorsports Park, and everything is about 2 hours away for them.

The girls’ mom, Katie Moreland, says it was a little “nerve-wracking” first with them going 45 MPH. But after a few passes, they got more confident, and she felt a lot better about it.

Mark and Katie met each other at the race track and have been married for 11 years, and Katie says it is a very family/friend orientated place.

The Morelands do almost all the repairs on their vehicles, and Callie likes checking the tire pressure.  There are three classes of Junior Dragsters based on age groups.

Kendall and Callie have a favorite driver in the Pro classes that started as Junior Dragsters that they got to meet and take a picture with.  Her name is Erica Enders.

A Disney movie called “Right on Track” is a true story based on Erica and how she started racing Junior Dragsters and moved up.

If you have never watched a race, you can go to YouTube and look up Junior Dragsters or Summit Motorsports Park and watch some videos.

Racers are lucky enough to have two families.  One they are born into, and the other they gain at the track.  Good luck with your future races, Moreland family.