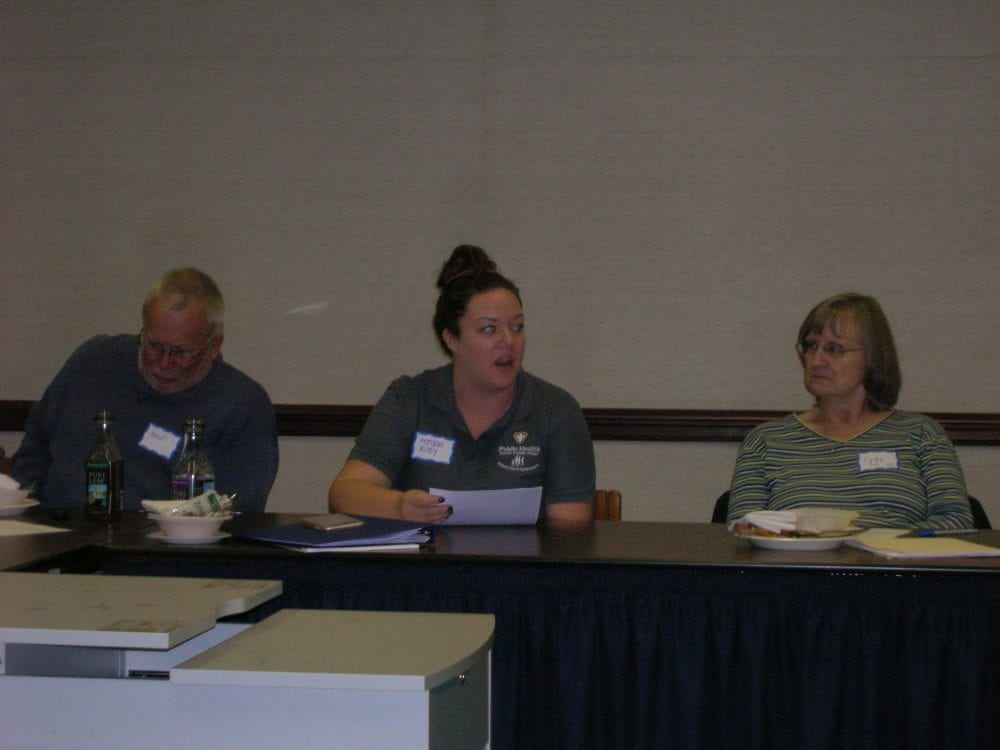 Mixed signals were heard about the traffic trends at local food banks at the United Way of Williams County Hunger Summit in the morning of October 27. Representatives of the Eastland Baptist food bank reported that their traffic has trended downward in all demographics. By and large though, all other representatives reported that their traffic has remained steady, with up to sixteen new clients registering per location. Another curious area was the reported return of several clients that had dropped off the rolls between 12 and 18 months ago.

An item of revisited discussion was the proposed 2017 Feeding Williams County food packaging event. Last year, the standard macaroni and cheese with textured vegetable protein was joined by red beans and rice. The mac and cheese has not enjoyed the popularity of the red beans and rice, which has vanished from the shelves of all reporting food banks. A proposition brought forth by United Way of Williams County Executive Director in previous discussions was to opt out of the unpopular mac and cheese, and in its stead switch to pasta and red sauce. The overall cost would be between $15,000 and $18,000, to which Mr. Pepple stated, “We either need to find the money, or a donor.”

Finding volunteers for the actual packaging event, he said, is never a problem. “The people that volunteer and come really enjoy the event,” he said. “The teams really enjoy doing it.”

A new topic of information mentioned by Mr. Pepple in a pilot program of the Toledo Northwestern Ohio Food Bank, which began in Henry County, and is now appearing in Williams and Defiance Counties. Entitled ‘Harvest Market’, the program brings a grocery truck to various locations where people can make purchases at heavily discounted prices. According to the Toledo Northwestern Ohio Food Bank, items available for purchase vary from week to week, and currently select produce is available at no cost. Items are available for purchase using SNAP benefits, or using credit or debit cards. Shoppers are recommended to bring their own bags and boxes, if possible.

The truck has only been in Williams County twice, both times at the Enrichment Center, east of Montpelier on State Route 15. “It will be interesting to see how it works,” Pepple said, adding, “I don’t know how many clients that they’ll serve, but there are plenty of opportunities, specifically in Montpelier and Bryan, but also in other places where they can park this truck around the county. What we’re trying to do is have them make a stop, so that maybe they would come to Edgerton, they would come to Edon, they would come to Montpelier. Just do a route, where they would be in town around an hour at a location, then just move on to the next. They’ve only been here twice in October…they’re just rolling this out.”

Nothing but praise was heard when the topic changed to the donations of beef, pork and venison to the local food pantries. Unprocessed meats are donated to the United Way of Williams County, which pays to have them processed and delivered to the local food banks. Mr. Pepple will be acting upon the suggestion to contact other processers outside of Williams County to gauge their interest in contributing to the effort.

The deliveries from the We Care Cabinet have been temporarily suspended as the delivery driver is no longer available. The We Care Cabinet has acted as the outlet for personal care and cleaning items, and has, since its inception, seen a strong demand for the aforementioned items. Representatives at the meeting indicated that they would be willing to come to a central distribution point to pick up the items until a delivery schedule can be reestablished.

Megan Riley of the Williams County Health Department (WCHD) reported on the data gathered and compiled from their most recent Community Health Assessment. Completed earlier this year and done every three years, this assessment uncovers the trends in several demographics of the local population that, for the most part, go either underreported or unreported in their entirety. New this year is a study entitled, “Social Determinants Of Health.” According to the WCHD, “Social determinants of health are conditions in the environments in which people are born, live, learn, work, play, worship, and age that affect a wide range of health, functioning, and quality-of-life outcomes and risks.” She noted that this new section dealt more with things that impact health, rather than the old standard of specific ailment health issues, and breaking down a small portion of the numbers, Ms. Riley’s report uncovered some disturbing facts about Williams County. The median annual household income in Williams County is approximately $42,000, which is below the median averages for Ohio, and the United States. 14 percent of Williams County residents reported that they lived in poverty, with 22 percent of children aged 0-17 also living in poverty. Of those who have received assistance over the past year, the breakdown was:

Three percent of Williams County adults reported that at least one person in their household went to bed hungry at least one day per week due to a lack of food. Five percent of adults said that they were uninsured. That number increases to 10 percent for adults with annual incomes of $25,000 or less. 12 percent of adults were dealing with the stress of having bills that they could not pay, the third highest stress source behind the hospitalization of a family member (36 percent), and the death of a family member or friend (29 percent). “These are some of the things that change the conditions and the environment of where we live, work and play, and drastically effect the range of health, and quality of life,” Ms. Riley said.

Mr. Pepple reported on a conversation that he had with Phil Ennen, the CEO of the Community Hospitals and Wellness Centers (CHWC) on a program currently operating in Toledo under the auspices of ProMedica. Entitled ‘Food Pharmacy’, this program ties in the professional medical community with the efforts to alleviate hunger, and Mr. Ennen asked if something similar could be done in Williams County. “The model,” Mr. Pepple explained, “…is that people visit a doctor, and the doctor would determine if there is food insecurity. They discovered that they were treating people, then sending them out, and they didn’t have any food. So they are writing scripts, and having them go to the Food Pharmacy to fill the script for three or four days of food. Some of these are based upon health conditions; if they had diabetes, they could select food for that specific health condition. There is a dietician helping the person select food. We want to explore this, and maybe bring it.” The challenge posed however, would be the need for space. CHWC has none, and neither does the Parkview Physicians Group building. Local food pantries have some of the standard fare, but specialized dietetics are a rarity, and there is no dietician.

Cathy Sito of WIC mentioned that when it comes to donations to a food pantry, quantity does not always trump quality. She distributed a list of suggested items to donate, which included pasta and rice, canned vegetables and fruits, canned salmon, tuna and chicken, oatmeal and breakfast cereals, peanut butter, chunky soups, and other healthy items.