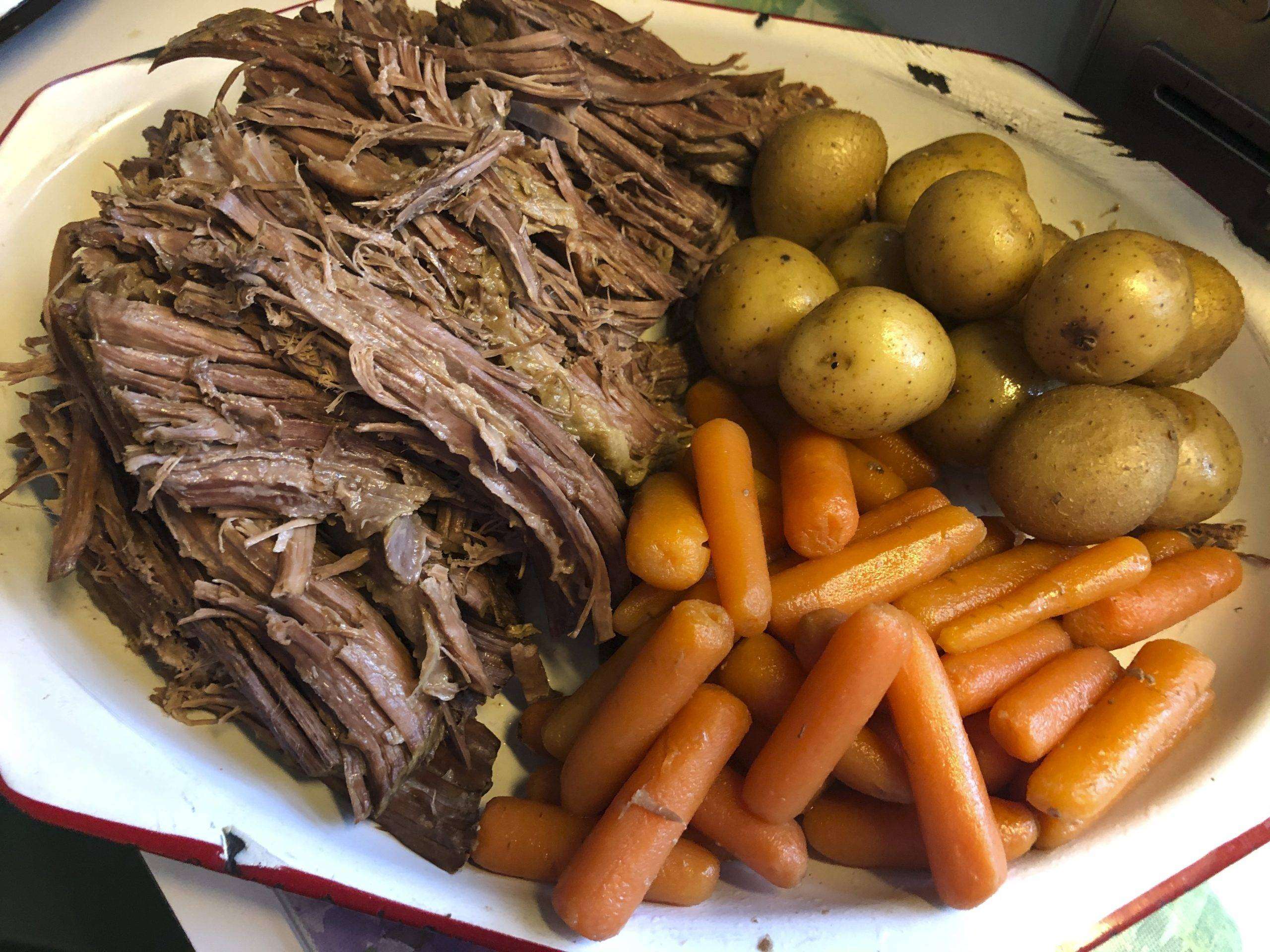 This image released by Kim Bierly shows a pot roast dinner with carrots and potatoes, made in a slow cooker. Before the coronavirus emerged, Bierly often worked late at her office and then met her husband for a quick dinner at one of the restaurants in their central Pennsylvania neighborhood. Now working from home, she’s pulling out old recipes _ the kinds of things she remembers her mother making. (Kim Bierly via AP)

And in Texas, Babette Maxwell — who would otherwise have been running at least one of her three teenage sons to sports practices or school events — was Googling recipes to engineer homemade versions of her boys’ favorite Taco Bell items.

Throughout the U.S., lives have been radically upended by the COVID-19 pandemic. There is worry and washing of hands. But one bright spot is emerging from self-quarantine and mandatory working from home: In this nation that so often dines out or gobbles processed food on the run, Americans are suddenly cooking a whole lot more.

Before the coronavirus emerged, Kim Bierly often worked late at her office and then met her husband for a quick dinner at one of the restaurants in their central Pennsylvania neighborhood. If they didn’t eat out, they’d reach into the refrigerator and choose something packaged to heat up.

“I’ve always enjoyed cooking,” Bierly says. “But it was being saved for weekends. And by the time you get to the weekend you had all the other things you need to do. So it would be something quick or something prepared.”

Now working from home, she’s pulling out old recipes — the kinds of things she remembers her mother making, like stuffed pork chops or a bubbling pot of chicken and noodles.

“I think we need comfort right now,” she says, “and food is comfort.”

Unavoidably, these home-cooked dishes come with a side of stress. We’re trying to protect ourselves from germs at the grocery store, and may wonder whether supermarket shelves will become emptier in the coming weeks. But those worries are encouraging people to get creative by trying new ingredients and sharing advice on how to use unfamiliar vegetables or cuts of meat bought out of necessity.

What can you do with the canned foods that have been idling since last year at the back of your kitchen cabinets? Facebook groups like Pandemic Pantry have sprouted up as gathering places for strangers to share advice.

Michael Volpatt, owner of the gourmet Big Bottom Market in Sonoma County, California, tackled the subject of canned goods on a recent installment of the impromptu cooking show he began hosting from his kitchen on March 14. Scrolling through Facebook while gathering ingredients to make himself dinner that night, Volpatt noticed the Facebook “Live” button on his phone screen. With his store closed, he realized it was a way to connect with friends and customers, and not be alone while preparing his meal.

“Hey everybody,” his first broadcast began. “I’ve never done Facebook Live before. But I figured since I’m kind of staying at home and going to do some cooking later on, you’re going to join me.”

A growing audience now watches and comments nightly as he prepares everything from his mother’s marinara sauce to pot pies made with his Big Bottom Market biscuit mix, which appeared on Oprah’s Favorite Things list in 2016.

“It’s heartwarming,” Volpatt says, “and it takes a lot of the awkwardness of this whole experience away.”

Returning to old recipes and learning new ones can be both a necessity and a welcome distraction during this strange time.

“Cooking brings back good memories,” Bierly says, “like standing there at the pot on my stove, cooking the spaghetti and thinking of when my mother used to do that.”

Food Network president Courtney White says her channel has seen a double-digit ratings increase in the past week, as viewers watch marathons of comfort food-focused shows like Guy Fieri’s “Diners, Drive-ins and Dives.” FoodNetwork.com has also had a double-digit increase in visitors and page views, White says. And many of the channel’s chefs have been broadcasting informally from their home kitchens via social media, while viewers pepper them with questions in real-time.

Alone at our stoves, we’re realizing how good it can feel to make dinner from scratch by using just a few ingredients consciously and carefully. Families are also getting their kids involved.

“Now, more than ever, we hope you’ll find moments of peace when gathering around the dinner table,” the co-founders of the retail chain Savory Spice wrote in a website post to their customers over the weekend. “We hope you’ll find moments of joy when preparing food with your little ones. We hope the simplicity of a home cooked meal is a quiet reprieve from the chaos outside.”