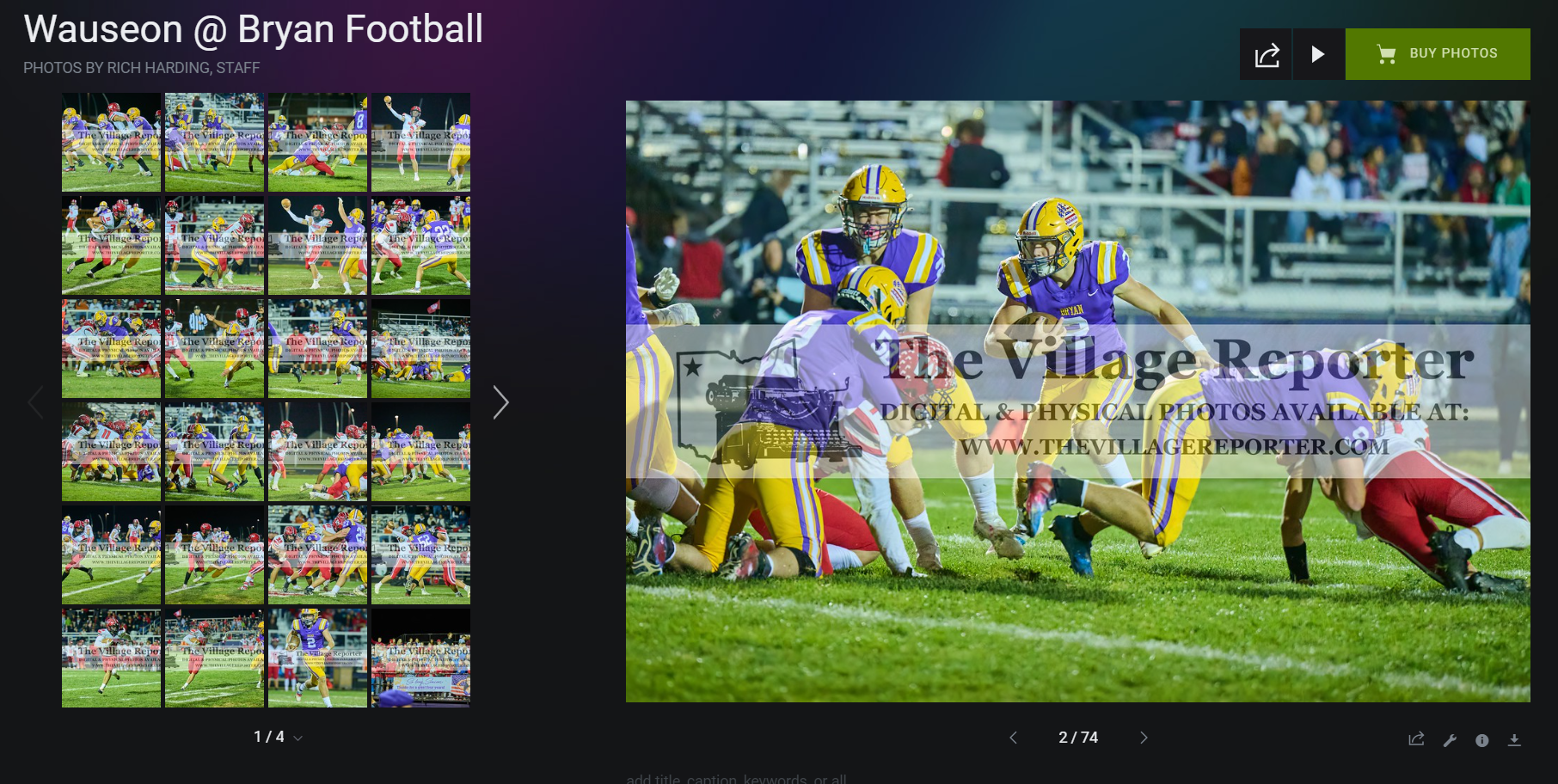 BRYAN – Bryan will be playing at least one more week. Thanks to their win of Friday night, the Golden Bears grabbed the No. 13 seed in Division IV Region 14 and will face No. 4 Elyria Catholic in the first round.

Bryan (6-4, 4-3 NWOAL) picked up the win behind the arm and legs of quarterback Jase Kepler.

“But the biggest thing is the line gave me enough time to throw and I was able to help my seniors play another game.”

The biggest score arguably came on Kepler’s one yard quarterback sneak on fourth down and goal from the Wauseon one yard line.

Not only did the touchdown clinch the win for Bryan, but it was also the third time that the Bears had reached the Wauseon one yard line.

The other two times, the Wauseon defense rose up and stopped Bryan from scoring.

This time though, Bryan called a time out right before the scoring play.

“Since the line push play is now legal, I told the guys to go for it, for everybody to push and Jase was able to keep his balance and score,” said Bryan head coach Grant Redhead.

“This was a huge win for us. Nobody believed that we could beat Wauseon, as five different newspapers called for a Wauseon win.”

“But tonight, with the Veterans here and with the military flyover, I told the guys make some of your own memories tonight and they did. I’m proud of them.”

The Bryan defense also came up big by intercepting Wauseon quarterback Trey Parsons three times. The defense held him to just 10 completions in 24 attempts in the second half while shutting out Wauseon in the final two quarters.

“Bryan had a good game plan and were able to come up with some big plays,” said Wauseon head coach Shawn Moore.

“I thought our defense played tough (stopping Bryan inside the one-yard line twice and stopping them on the Wauseon 24-yard line another time), but when you give them that many chances, they’re eventually going to pop one.”

“Offensively, we made some mistakes and also dropped some passes,” Moore continued. “Bryan made the plays when they needed to, and we didn’t.”

After getting stopped twice inside the one-yard line, Bryan was able to score on two straight possessions on fourth and one.

In the first, Bryan faced fourth down and one from the Wauseon nine-yard line. But Kepler was able to find tight end Carter Dominique for a nine-yard touchdown, giving Bryan a 14-7 lead with 10 minutes left in the game. It was Dominique’s first touchdown of the year.

“It was awesome and what a better week to get (my first touchdown) when we needed those points,” Dominique said.

The score not only gave Bryan its first lead of the game, but it came after Bryan’s Sam Herold intercepted a Parsons pass on third and goal.

Herold returned the interception 34 yards to the Bryan 36-yard line.

The first half was a frustrating one for the Bryan offense. The first time Bryan had the ball, the Bears had a first and goal at the Wauseon three-yard line.

But a five-yard penalty against Bryan followed by an interception in the end zone stopped the scoring threat. Another time, Bryan was stopped on downs at the Wauseon 24-yard line.

In the meantime, Wauseon had a 7-0 lead, with seven minutes left in the first half, on Zaidan Kessler’s six-yard TD run.

However, Bryan got the spark it needed when Brody Devlin returned the ensuing Wauseon kickoff 86 yards for a touchdown to tie the game at 7-7.

At the start of the second half, it appeared that Bryan was in business when Ayden Pelz intercepted a Parsons pass and returned to the Wauseon 30-yard line.

Two consecutive Kepler runs gave Bryan a first and goal at the one-yard line. But four straight run plays netted no yards and Wauseon took over on its own one-yard line.

Wauseon then took a long sustained 12 play drive to a first and goal at the Bryan 10-yard line.

But Herold intercepted another Parsons pass and set up Kepler’s tie breaking touchdown pass to Dominique.

Parsons led Wauseon (6-4) with 196 yards passing but had the three interceptions.