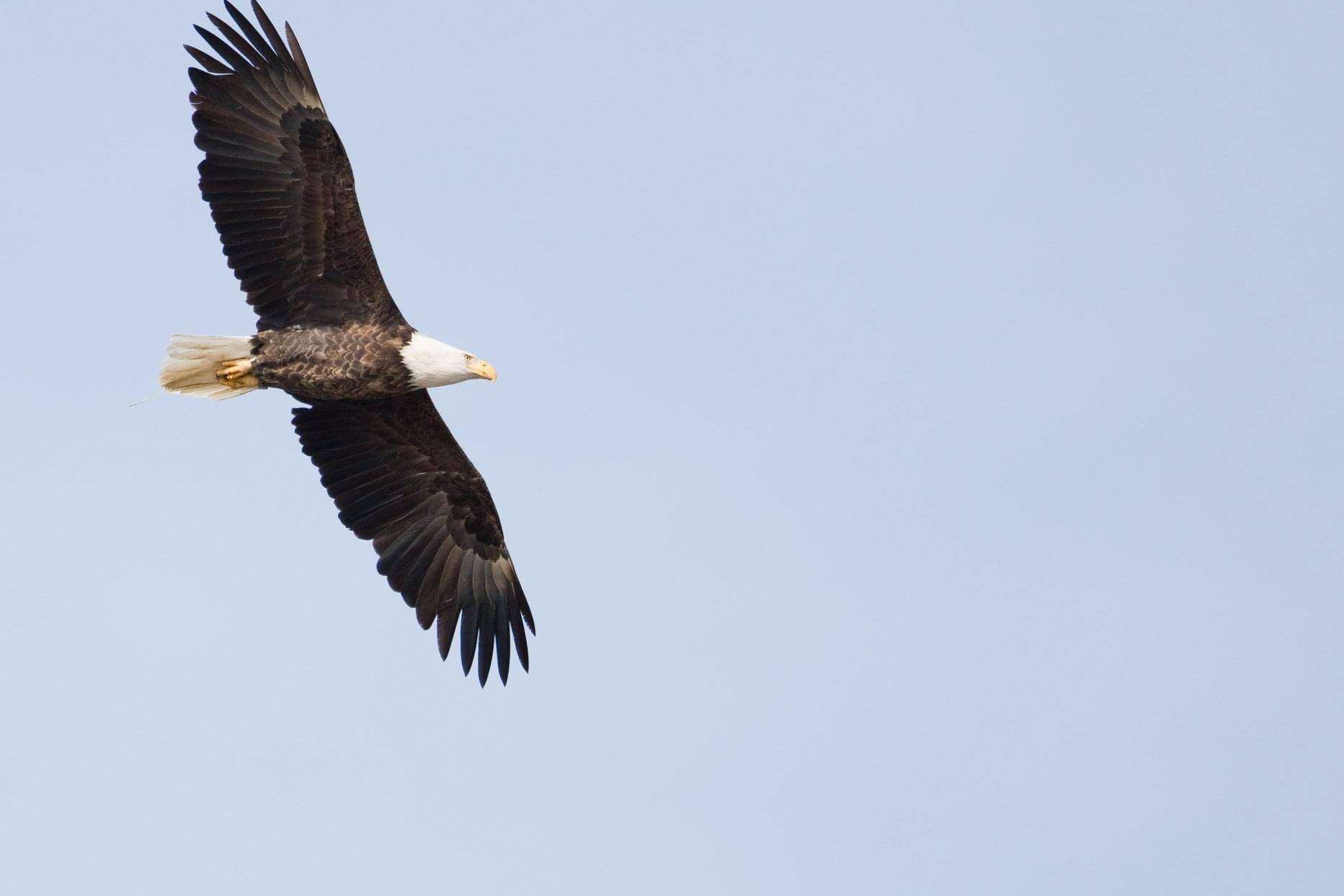 Look for these majestic birds of prey roosting along rivers, sitting on frozen lakes, or even in open farm fields. Eagle nesting behavior is also apparent now, including carrying sticks to reinforce their famously large structures. An eagle’s large size and dark body is easy to identify against the snow and ice.

Bald eagles in Ohio typically lay eggs and incubate in February and March, nesting in large trees such as sycamores, oaks, and cottonwoods. Meanwhile, frozen lakes and rivers force the birds to expand their hunting grounds in search of fish and carrion, their foods of choice.

“Spotting a bald eagle in the winter is a memorable moment,” said Division of Wildlife Chief Kendra Wecker. “The winter weather in Ohio makes these birds accessible in ways that only occur during this time of year. Remember to enjoy these birds from a safe distance to avoid disturbing them.”

Ohio’s 2021 midwinter bald eagle survey results showed a decline from record-setting numbers in 2020. Each January, Division of Wildlife staff fly pre-established routes, counting the number of adult and juvenile eagles. This year, staff counted 215 bald eagles, a 61% decrease from the 553 birds counted in 2020.

The unusually mild winter and reduced survey efforts because of COVID-19 protocols may have contributed to the lower observed numbers during this year’s count. Bald eagles are highly mobile during the winter, leading to variability in observations. Overall, bald eagle midwinter trends have been encouraging in recent years, and the numbers seen this year are similar to 2016-2018, when as many as 253 eagles were observed in the count.

In 2020, a nest census was completed in an attempt to locate every active bald eagle nest in Ohio. The results indicated Ohio had 712 active eagle nests, a 153% increase from the previous census completed in 2012, when 281 nests were recorded. The majority of nests were confirmed on private property, while less than 150 were on public lands. Of those, 43 nests were located on Division of Wildlife properties.

Lake Erie and other large waterbodies host the highest number of eagles because of easy access to food resources. Ohio is made up of two major watersheds, roughly separated by U.S. 30 which runs through north-central Ohio. The Lake Erie watershed, located north of U.S. 30, hosted 396 nests. In the Ohio River watershed, covering the rest of the state, 316 nests were found.

The bald eagle was once an endangered species, with only four nesting pairs in Ohio in 1979. Thanks to partnerships between the Division of Wildlife, Ohio zoos, wildlife rehabilitation facilities, concerned landowners, and conservationists its population increased. After much hard work and continued conservation, the bald eagle was removed from the federal list of threatened and endangered species in 2007, and from Ohio’s list in 2012.

Bald eagles are protected under both state law and the federal Bald and Golden Eagle Protection Act, making it illegal to disturb bald eagles. When viewing these majestic birds, remember to respect the bird’s space and stay at least 100 yards away. Disturbing bald eagles at the nest site could lead the pair to abandon the eggs.

As with many of Ohio’s native wildlife species, bald eagles require specific habitat conditions to thrive. Bald eagle habitat protection and research is funded by the sale of bald eagle conservation license plates, income tax check-off donations to the Endangered Species and Wildlife Diversity Fund, and sales of the Ohio Wildlife Legacy Stamp. Learn how to support Ohio’s magnificent wildlife such as the bald eagle at wildohio.gov.

The mission of the Division of Wildlife is to conserve and improve fish and wildlife resources and their habitats for sustainable use and appreciation by all. Visit wildohio.gov to find out more.

ODNR ensures a balance between wise use and protection of our natural resources for the benefit of all. Visit the ODNR website at ohiodnr.gov.