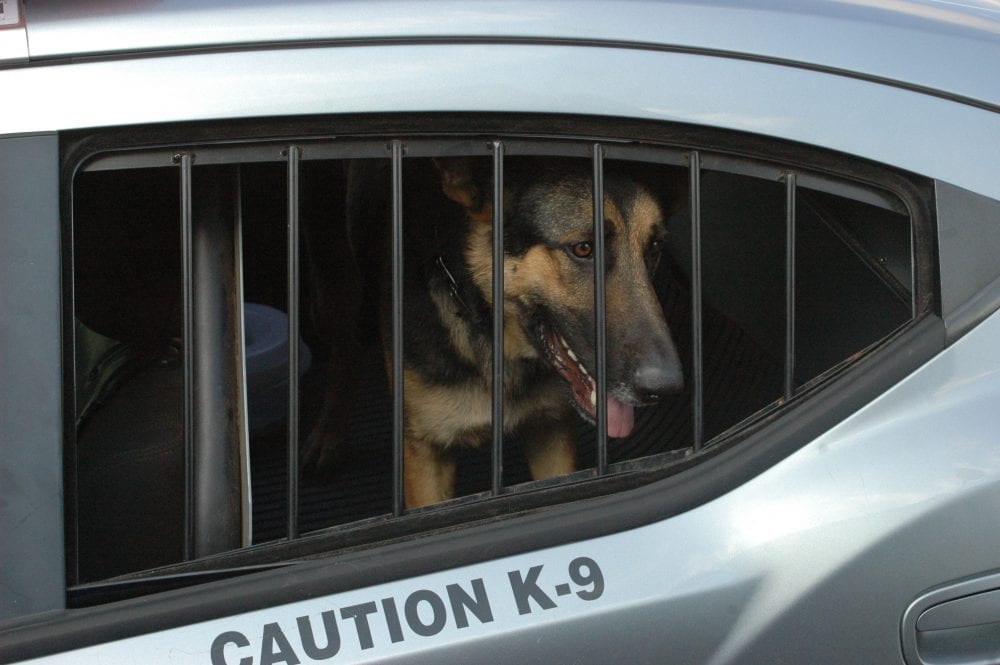 There is a new member of the Stryker Police Department and he can be a fun-loving guy most of the time, but when’s he working, he’s all business.

The new guy is Rocco, a 3-year-old German Shepherd who works with handler Sgt. Steve Mendez on tracking and narcotics. Rocco got his certification only a couple of weeks ago and is working with Mendez in the village.

Rocco came to Stryker through an organization called Throw Away Dogs, which rescues and restores abandoned dogs. Mendez refers to Rocco as junkyard dog and likes to show what he can do to everyone.

Mendez has been on the Stryker force since 2001 and inherited a police dog from another officer who went overseas. That dog served a few years and had to be retired and eventually put to sleep.

So Mendez began looking for a replacement and came across the Throw Away Dogs Project. The organization rescues, rehabilitates and relocates thrown away dogs so they can have a purpose to be honored, respected and trusted as Police K-9 working dogs, the organization’s Facebook page states.

The dogs are donated to police departments. The dogs are evaluated by K-9 officers for obedience and temperament, Mendez said.

The organization contacted Mendez and told him they had a dog who was high-strung, and highly stressed.

“The Humane Society had taken him from the owners for abuse and neglect,” Mendez said.

So Mendez told Chief Steve Schlosser he got a free dog, and then traveled to Pittsburgh, Penn., and took possession of Rocco. The two spent several months together to bond before going for certification, Mendez said.

The officer went through the training with Rocco, which seems logical, but often does not happen, Mendez said. Some officers let the dog go through training and pick them up at the end, he said.

Mendez and Rocco attended the Ohio Peace Officer Training Academy to learn all the criteria for being a proper police dog and handler. Stryker Chief Schlosser allowed Mendez to take part in the training.

Rocco is certified as “Special Purpose,” which covers tracking and narcotics. There is another level “Dual Purpose” that includes handler protection and bite work as well. Rocco will get there eventually, Mendez said.

“He’s not ready yet,” Mendez said.

When the officer is off duty, Rocco stays with the family and is good with the kids, Mendez said.

“He’s kind of like a bull in a china shop, though,” Mendez said. “He has his hyper moments.”

While Rocco has not been called upon so far, the officer would like to see him used by other small towns in the area who need the services of a K-9 unit.

“Give us a call, we’ll head that way,” Mendez said.

That includes going to schools in Northwest Ohio and searching for narcotics, he said.

“The K-9 network is a pretty tight group and we try to help each other out as much as we can,” Mendez said.

Rocco could also be used with other K-9 units for drug interdiction on local roads and the turnpike. He is trained to sniff out drugs in buildings and vehicles.

“We can try to catch this epidemic,” Mendez said.

That training has been a lot cheaper than some departments who get fresh dogs. Rocco’s training has cost $2,500 (raised through donations) where other departments have paid $13,000 to $18,000 for their dogs for the same training.

Mendez saves money through getting dog food donated by Cornerstone Critters, a Bryan pet store and using a metal dog cage. His Charger’s back seat is consumed by Rocco’s cage.

The Stryker department also keep their cars longer than some larger departments who change vehicles every two to three years, Mendez said.

“It doesn’t cost a lot to run these programs if you want to put some footwork into this and find these resources,” Mendez said.

Rocco is required by the state to train for 16 hours a month and Mendez does that on his own time and when there is a lull while on duty. The training is good, but he would like to use Rocco for actual work.

“I’d like to see the dogs be utilized in the way they were meant to,” Mendez said. “I’d like him to be used out in the county schools.”

Rocco has given demonstrations to community organizations and Scouts. He wants Stryker residents to have a sense of ownership of Rocco.

“He is the community’s dog,” Mendez said.

Mendez gave a demonstration of Rocco’s ability to sniff out drugs. He has a case with small samples of heroin, meth, crack and cocaine and placed them inside a garage the village uses.

The drugs were placed by the gas cap of a car, a pipe coming out of a post about 4 feet up from the floor, in a paper towel dispenser in a restroom and a drawer in a kitchen.

When Rocco is off duty, he is a typical playful, affectionate dog. Harmless and happy is a good way to describe him.

Show him his toy and he turns into a different animal. The toy is his signal that’s it’s time to work. Mendez shows him the toy, a long white tube and fakes a throw and if Rocco wants to get the toy back, has to find the drugs.

For each drug located, Rocco gets to latch on to his toy until Mendez repeats the process.

Rocco doesn’t know where the drugs are, but when he gets a whiff he starts scratching the hiding spot and barks until the officer grabs the drug.

At three of the four, he does a pretty good job of finding the narcotics. At the kitchen drawer, he found the scent, but became a little distracted.

Mendez said he will have to work with Rocco on that. All of Rocco’s reactions have to be written down his training log, the officer said.

So if any police department needs the services of a K-9 unit, Mendez urges them to call.