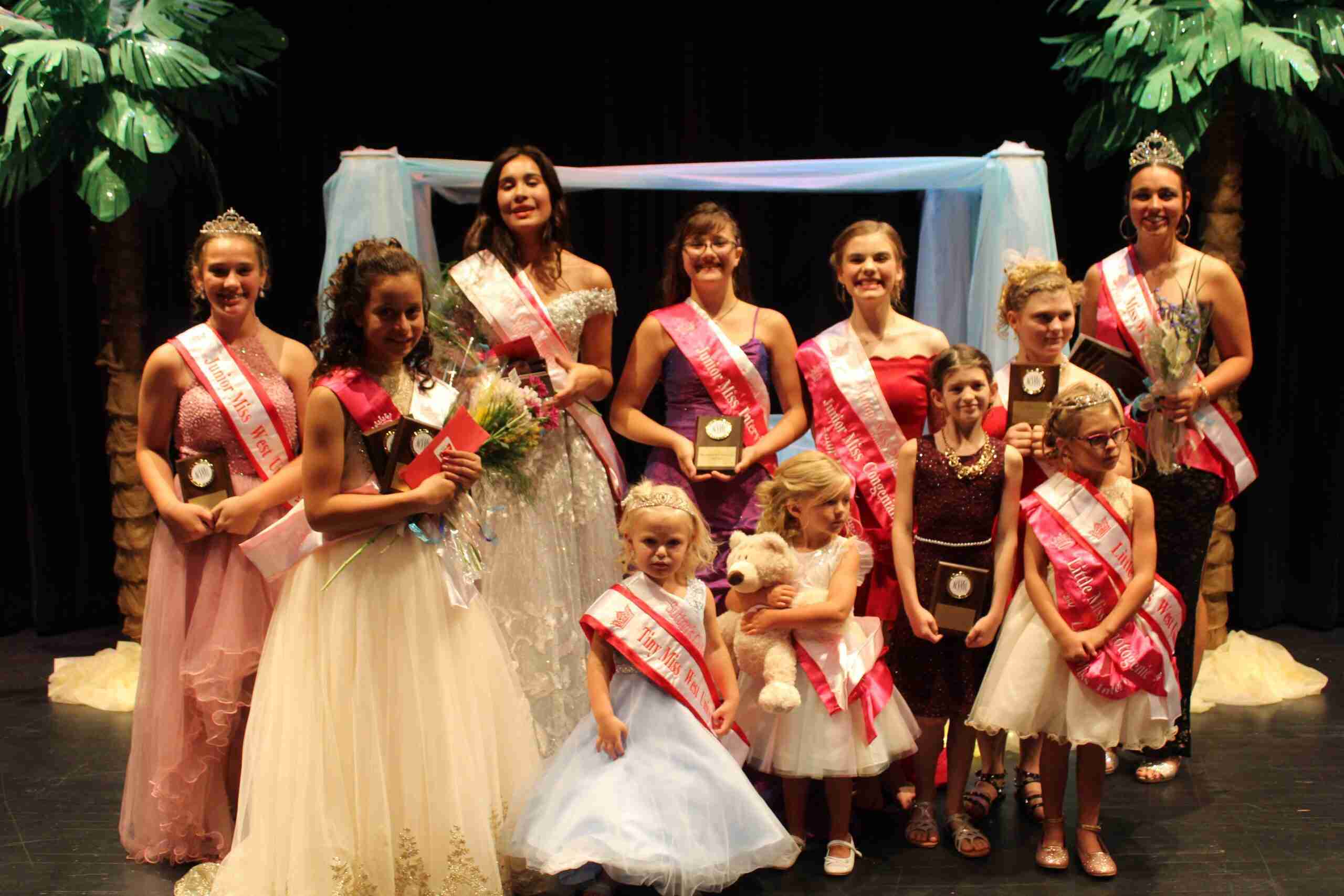 QUEENS AND RUNNER UP’S … The 2021 Miss West Unity Queens and Runner Up’s stand together after being crowned. (PHOTOS BY JACOB KESSLER, STAFF)

The Miss West Unity Pageant took place on Friday July 30th at 7pm. The newly crowned girls from the nights pageant are assuming the roles from the previous Queens who were crowned in 2019. Parents and friends packed the Hilltop School Commons Room to see each of the contestants compete. Shawn Bowers welcomed everyone for coming and the curtain opened.

First up were the Little Miss Contestants who came out to dance to the song Don’t Start Now. Contestants were introduced with their name, age and sponsors. Contestants were Kree Null, Tessa Jones, Bailee Bernath, Nevaeh Sieradski, Nayah Rodriguez, Scarlett Runkel, and Kaydence Stough.

The Junior Miss girls were then called out and danced to the song Blinding Lights. Junior Miss contestants were then introduced with Halle Jones being first, followed by Ava Pickett, Marleea Stough, and Lilly Stone. The program then moved to Miss West Unity. Contestants were introduced with Gabrielle Rodriguez going first followed by Matayvia Van Zile.

The pageant then moved to bring out the Tiny Miss West Unity girls. Contestants were Jovie Stocklin, Gracie Whitman, Aleeah Breuning, Oaklee Sheets, Cecelia Rodriguez, Zindaya Stough, and Logann Layman. After the introductions, all contestants from each category came back to the stage for pictures.

Judges were then introduced. Judges for the pageant were Chella Wilt, Chelsie Litwiller, Jenifer Williams, Kelly Dickens, and Samantha Willis. A special thank you was also given to Don Leu for all his hard work setting up microphones, lights and tweaking all the buttons. He also provided the music for the Father Daughter Dance and pitched in to help with cleaning.

The pageant then moved on to the talent portion with Gabrielle Rodriguez coming out to sing and Matayvia Van Zile coming out to perform a dance. After the talent portion, the Tiny Miss Contestants came back out on stage to show off their favorite summer wear. After the mini fashion show, the Little Miss contestants were brought out while being escorted by their fathers to compete in the evening gown portion. All girls then participated in the question-and-answer portion of the event.

Next, the Junior Miss Contestants were escorted by their fathers to compete in the evening gown portion of the contest. After each of the girls had gone through, they all came back up for the question-and-answer portion of their contest. It was then time for the evening gown portion of the Miss West Unity contest. Contestants were again escorted by their fathers before coming back up to participate in their question-and-answer portion.

The Tiny Miss West Unity girls were then able to come back up and show off their gowns. Each of the girls were escorted up by their fathers before heading backstage to prepare for the awards ceremony. But before that, 2019 Queens Little Miss Braydee Hatfield and Miss Brianna Bell came out on the stage. Brianna played the piano and sang everyone a song before a short intermission.

All of the girls then stayed up on stage to take pictures before going down to be with their friends and family. Congratulations to all contestants of the 2021 Miss West Unity Pageant. 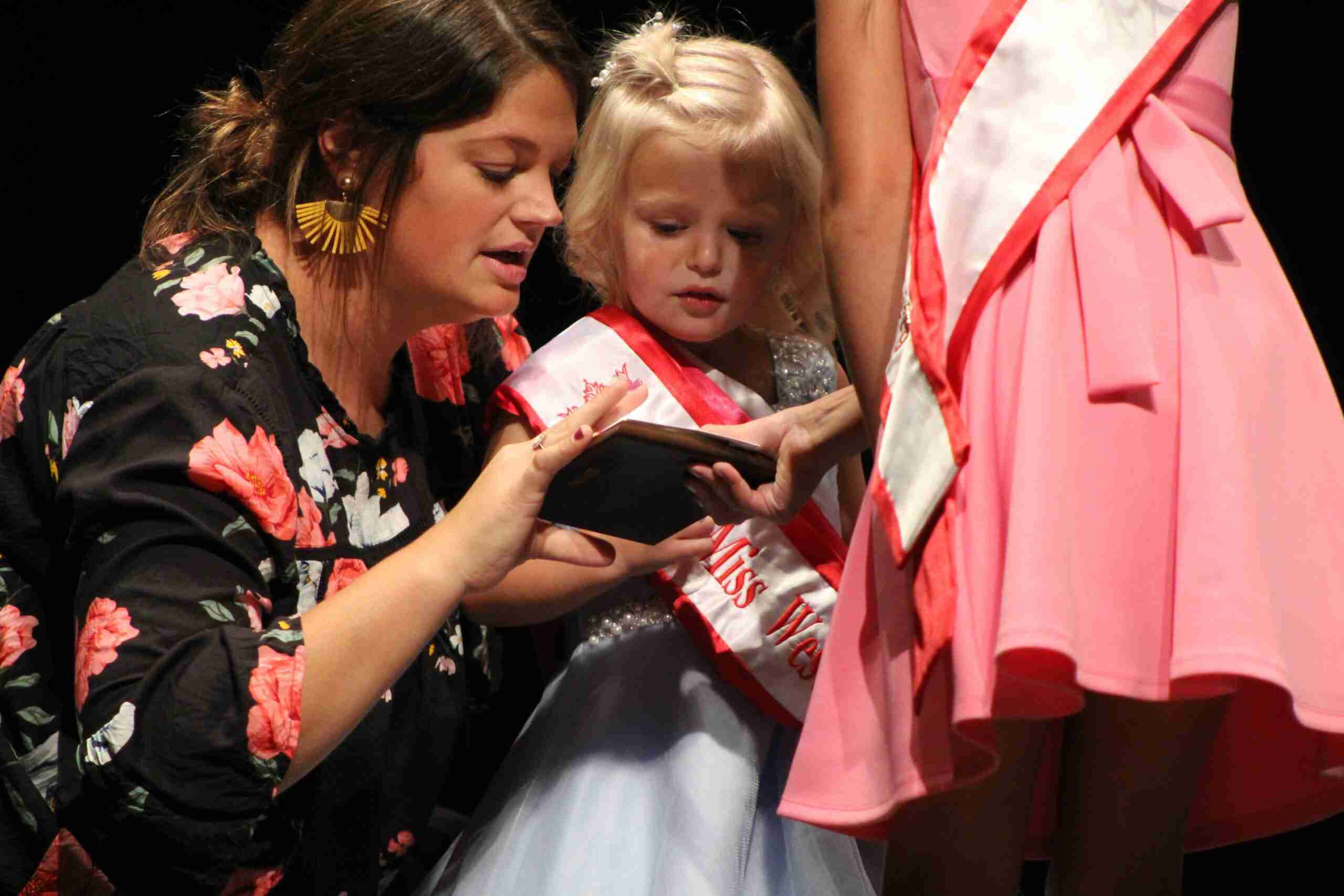 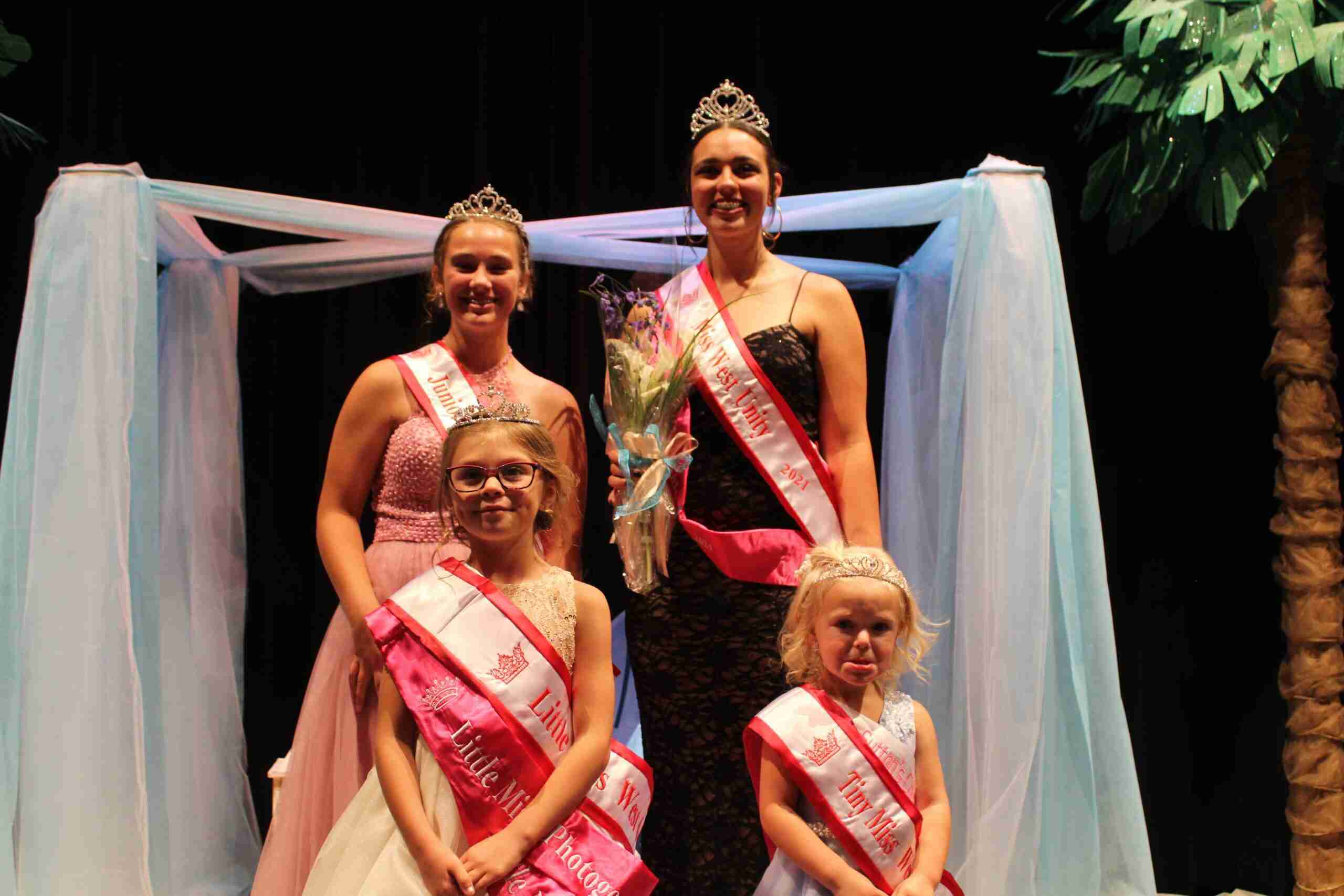 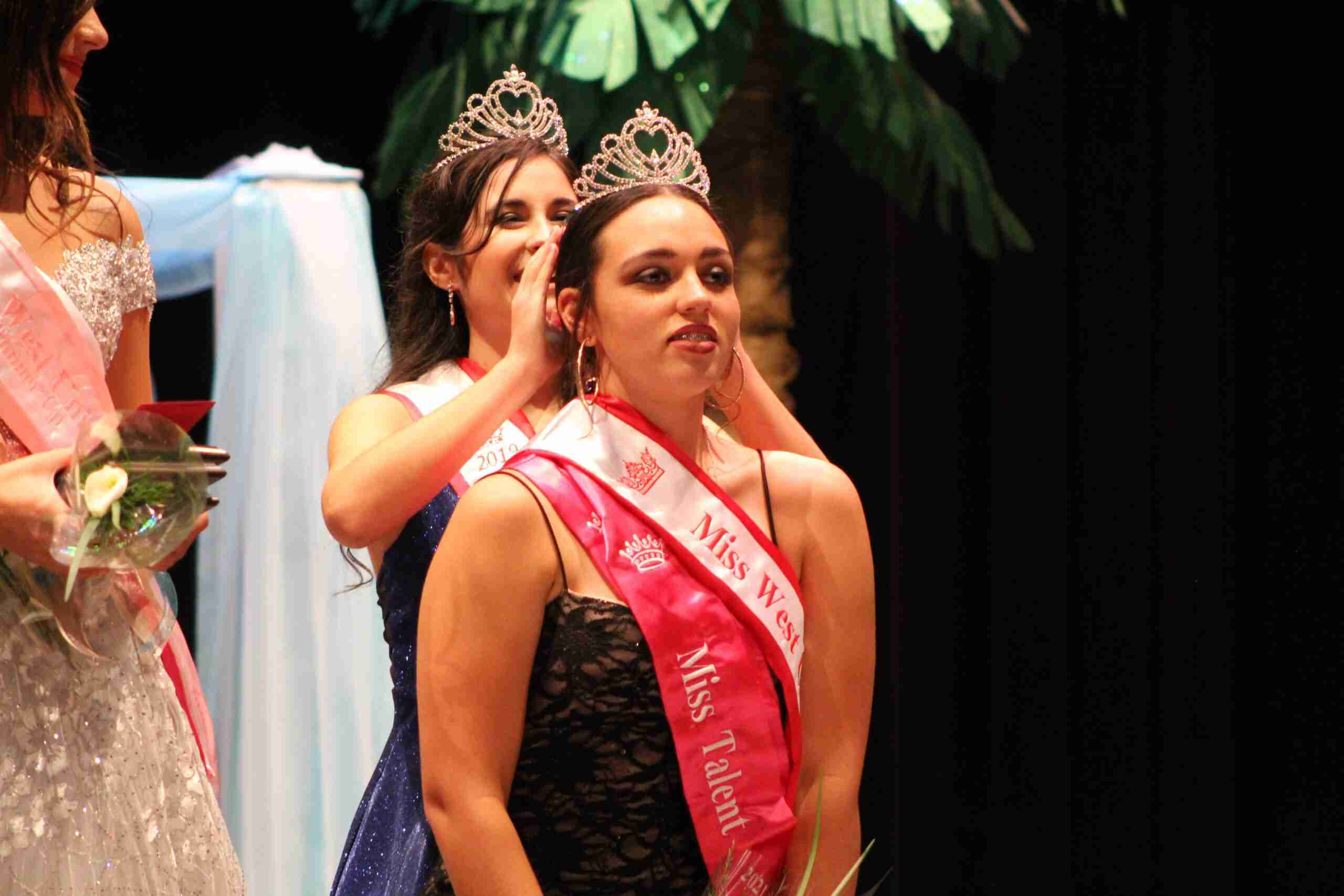 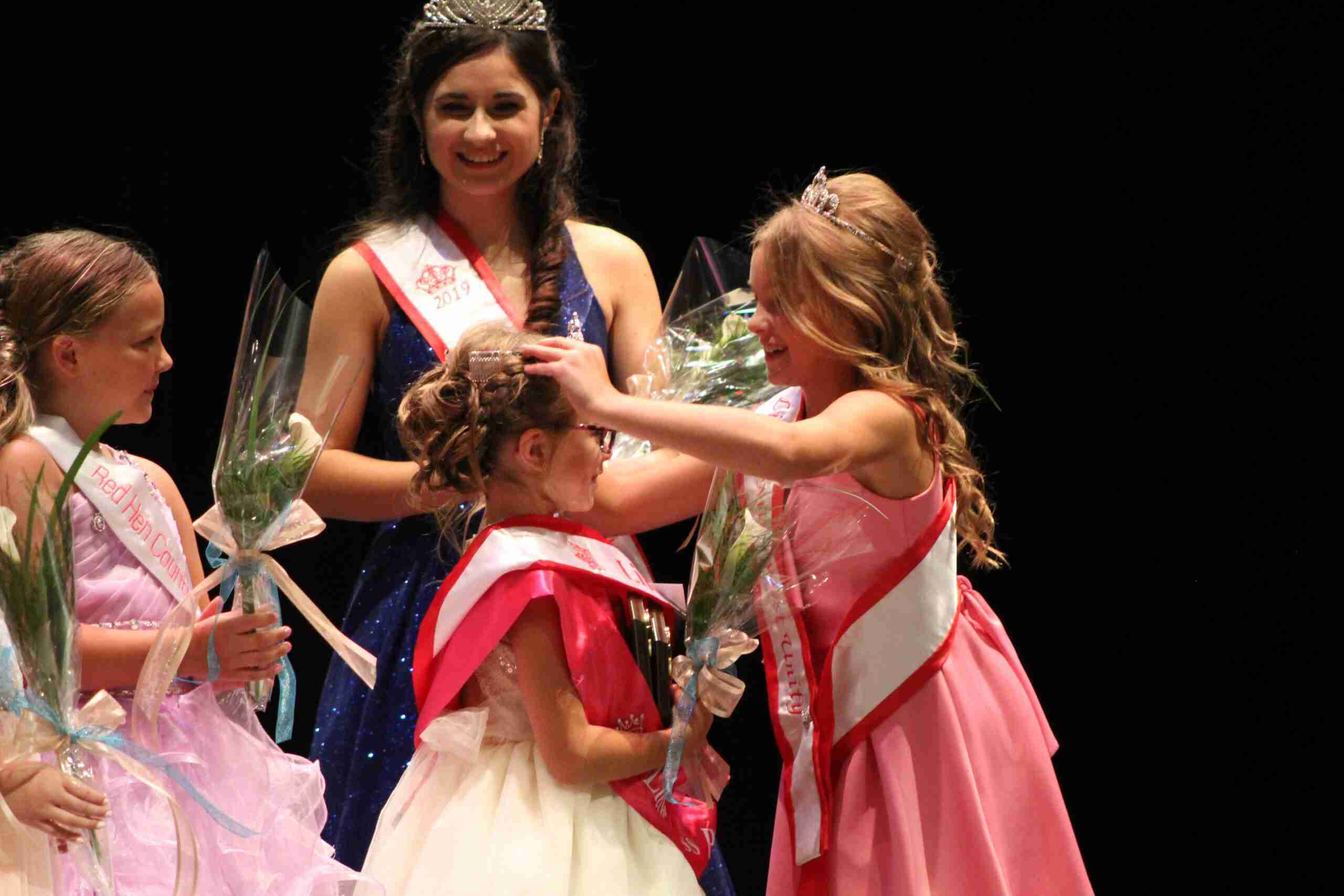 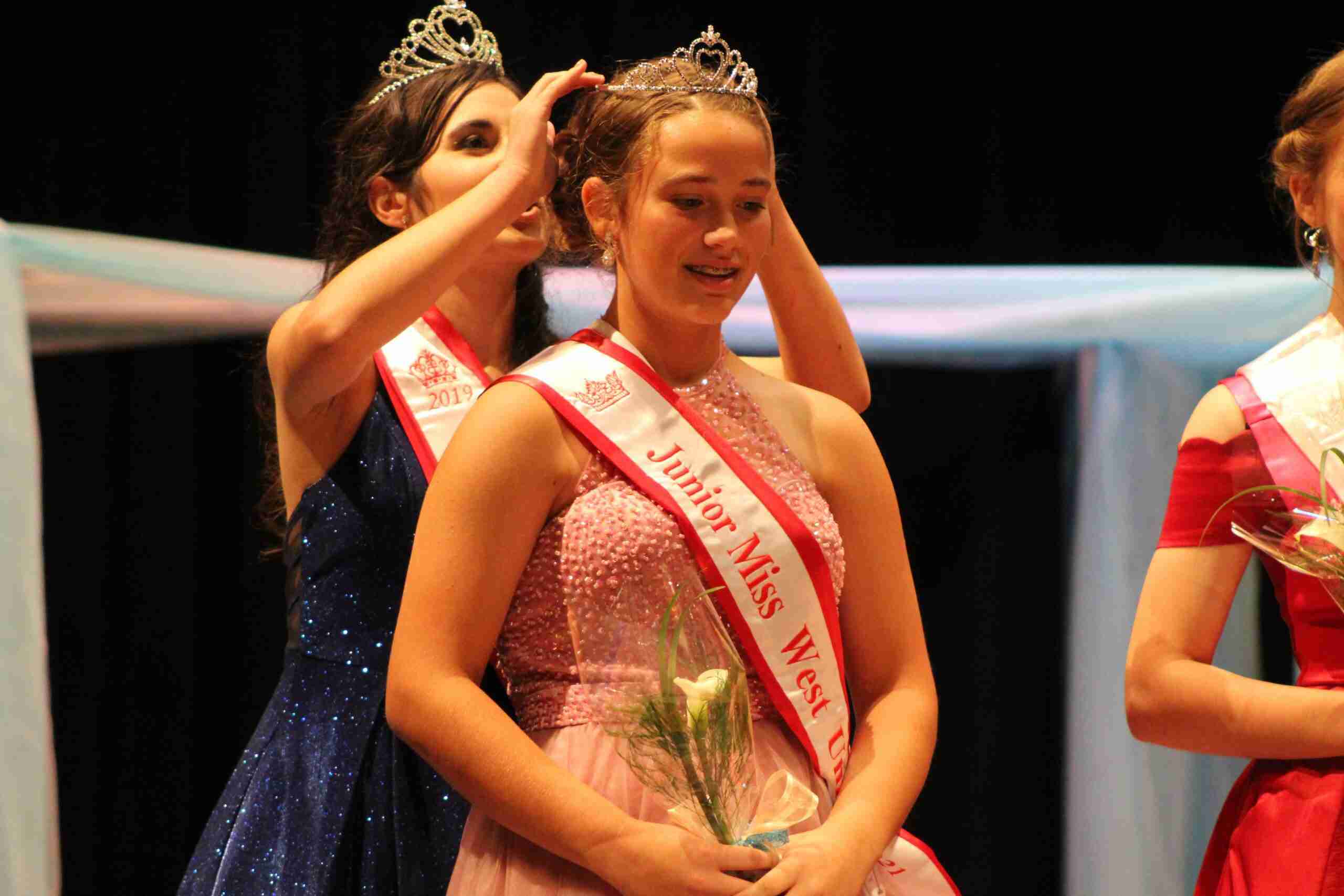