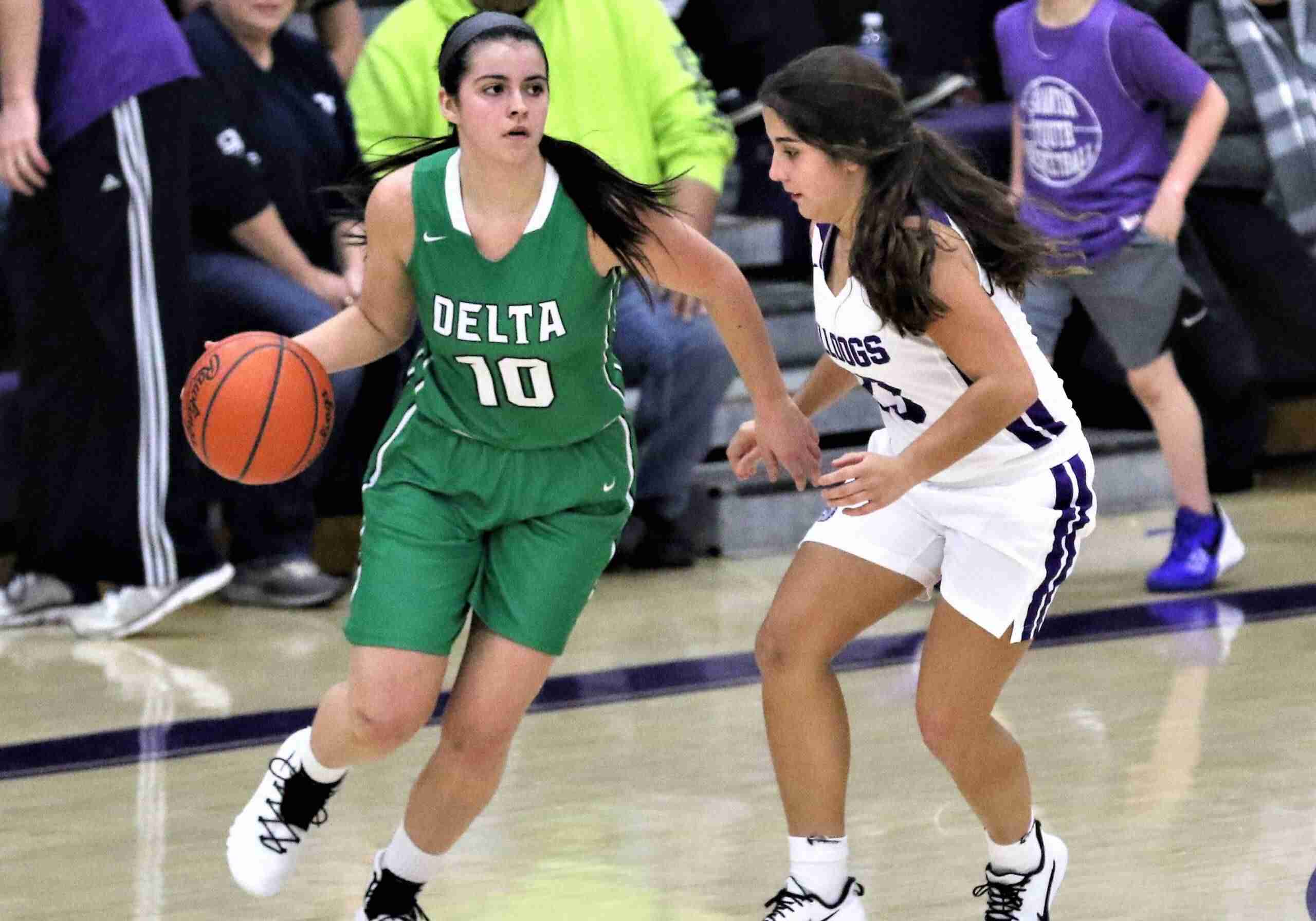 PLAYER OF THE YEAR … Delta’s Brooklyn Green handles the ball against a Swanton defender. Green, who was last year’s NWOAL Player of the Year, is one of five seniors back for Delta.

Archbold, Bryan, and Wauseon all return key players from last season, a season that the three schools shared the NWOAL title. Swanton and Delta also return key players as league scoring champion Arica Lutz is back for the Lady Bulldogs while NWOAL Player of the Year Brooklyn Green returns for Delta.

SEASON OUTLOOK: The Lady Indians look to continue the build off the success of the last two seasons that has included two Sectional Championships and a NWOAL Co-Championship last year. Despite having three starters and six letterwinners back from last season, Wauseon will need to replace two of their top three scorers in Sydney Zirkle and Sam Aeschliman.

Head Coach Dan Seiler likes the basketball IQ of this year’s squad but with only 13 girls currently in the high school program depth will be a concern going forward.

“We are looking to become consistent and have a very tough schedule ahead of us.” We hope to finish somewhere around .500”, Seiler commented.

Seiler expects Bryan, Delta, Swanton, and Archbold to be all near the top of the NWOAL this year.

ABOUT THEIR SCHEDULE: Wauseon starts the season at home against Archbold on November 27th for the non-league contest between the rivals and then open NWOAL play at Archbold on December 18th.

SEASON OUTLOOK: Eight returning letterwinners from a 16-7 season last year make Bryan one of the favorites entering the 2020-2021 season. “We should have good depth at each position”, commented Head Coach Todd Grosjean. “We have some depth at guard and don’t have to rely on one or two individuals to do all of our scoring”.

Grosjean his concerned with their lack of size which makes rebounding a point of emphasis this year.

“We are excited for the season. We had a great summer despite the COVID issues and restrictions but were able to do some things individually. We have upgraded our schedule with the addition of St. Mary’s Memorial and Anthony Wayne”, said Grosjean.

The coach expects the NWOAL to be very competitive again, very similar to last year when three teams shared the league title.

ABOUT THEIR SCHEDULE: The Lady Bears start the season on November 20th at home against Lake and will be at Swanton on December 18th to start league play.

SEASON OUTLOOK: Nine letterwinners are back for Archbold as they look to defend their league co-championship from last season. Coach Brian Ziegler looks for game experience and guard play to be strengths for this year while the lack of height will be a weakness.

“The returning players will need to step up and compete on a nightly basis. Howwell we do that will decide the outcome of our season”, commented Ziegler.

ABOUT THEIR SCHEDULE:The Lady Streaks host Hicksville on November 21st in their season opener and will start their NWOAL schedule on December 18th when they host Wauseon.

SEASON OUTLOOK: NWOAL scoring champion Aricka Lutz will lead the Swanton Lady Bulldogs this year, a team that has four returning letterwinners and welcomes eight newcomers to the roster. Swanton Head Coach Eric Oakes expects speed, experience, and defense to be strengths for his team this season.

“When healthy I think we will be an above average team and extremely competitive”, said Oakes.

Oakes looks for the NWOAL to be very competitive from top to bottom this year with a lot of teams returning top players. He expects Bryan, Wauseon, Delta, and Archbold leading the way in the league race.

ABOUT THEIR SCHEDULE: Swanton will host Delta in a non-league matchup on November 20th to start the season and will host Bryan on December 18th to begin NWOAL play.

SEASON OUTLOOK: NWOAL Player of the Year Brooklyn Green returns for Delta as part of five seniors that are back for Head Coach Ryan Ripke. Delta also welcomes back their top six scorers from last season.

Delta started the season 13-3 and then lost 4 of their last 6 games. Three of those losses came either in overtime or a last second shot.

“We need to be more consistent than we were last year in everything we do”, said Ripke. “We also have to make sure we rebound the basketball. I say this every year, but we are not a very tall team so that is always a concern”.

“We have a great core back from last year that are eager to get rid of the bad memory of how our season ended. I think we healthier and deeper than we were last year”, added Ripke.

When it comes to the NWOAL race, Ripke said every team in the league brings back key players from last year including Bryan, who he considers the preseason favorite.

ABOUT THEIR SCHEDULE: Delta will travel to Swanton on November 21st for a non-league matchup with Lady Bulldogs to open the season. NWOAL play starts on December 18th at home against Patrick Henry.

SEASON OUTLOOK: Kayla Prigge and McKenzie return for the Lady Patriots and will be looked upon to carry the scoring load. Patrick Henry was hit hard by graduation with the loss of seven letterwinners.

Head Coach Justin Sonnenberg says leadership and toughness will be strengths this year while they will need new players to take over the scoring with the loss of seven letterwinners.

ABOUT THEIR SCHEDULE: Patrick Henry will travel to Napoleon on November 20th for their season opener and will start NWOAL action at Delta on December 18th.

SEASON OUTLOOK: Evergreen brings back their top scorer in Bekah Bowser as they look to build off last year’s 10 win season. Head Coach Brittaney Cymbolin likes her team’s positive attitude and she hopes with the quickness of their guards they can run a fast pace game.

She does point to a lack of height as being a weakness for this year’s team.

“I think this group will surprise some teams. Their ability to pick up the pace and put pressure on teams through guard play will be fun to watch”, said Cymbolin.

ABOUT THEIR SCHEDULE: Evergreen starts the season on November 24th at Cardinal Stritch and will open their NWOAL schedule on December 18th at Liberty Center.

Davis like his teams scoring ability and overall team speed, though a lack of size is considered an area of weakness for the team.

ABOUT THEIR SCHEDULE: Liberty Center travels to Hilltop on November 23rd to start the season and will host Evergreen on December 18th in the league opener.