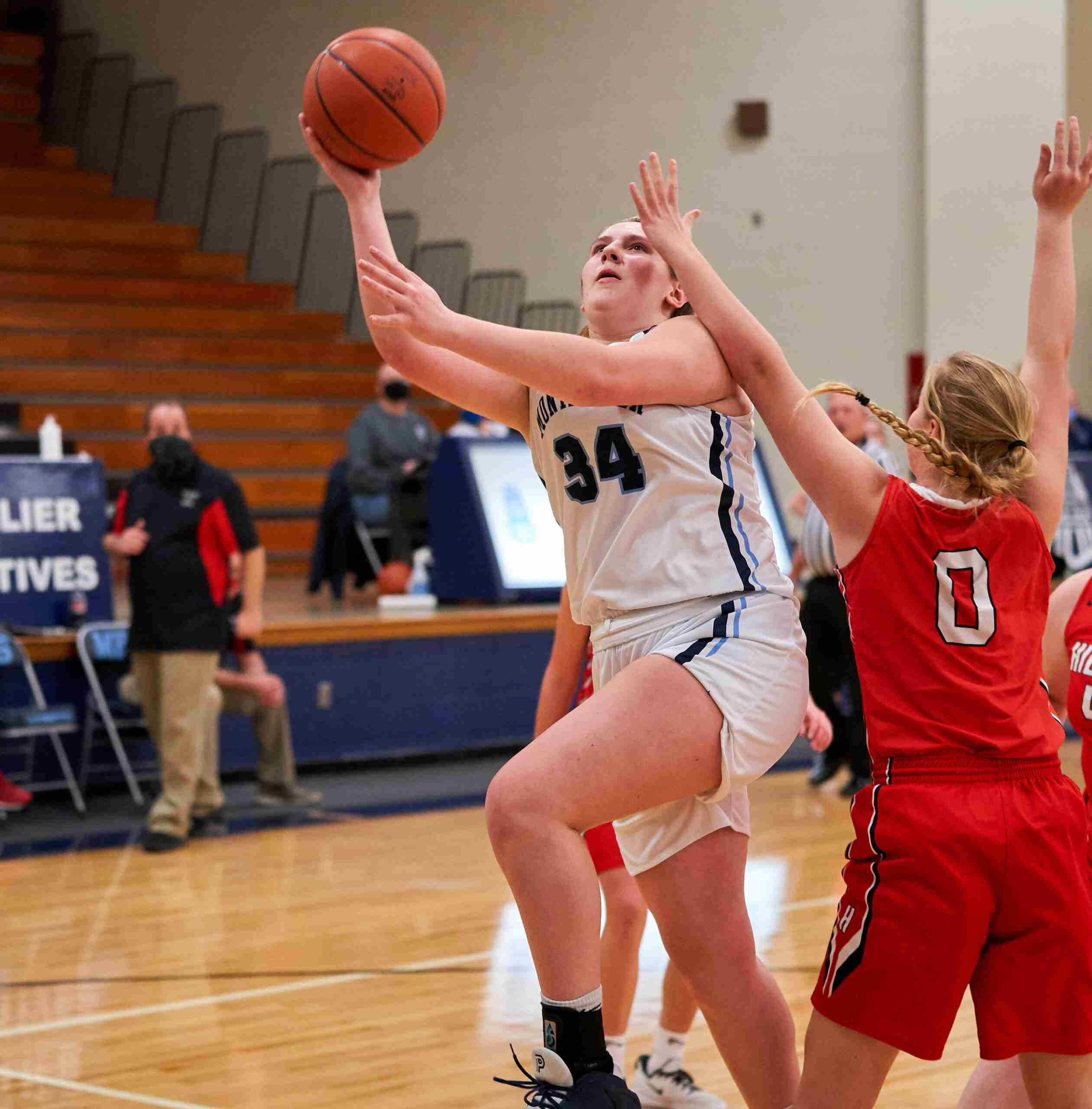 REINGING PLAYER OF THE YEAR … Ariel Page makes a move to basket in a game against Hilltop last season. Page, last season’s BBC Player of the Year, is one of three returning starters for the Lady Locos. (FILE PHOTO)

Holgate made the move from the GMC to the BBC and with that comes some changes to the scheduling. BBC teams will continue to play a home-and-home against each other but only one meeting will count toward the league standings.

While the Cadets and Locos are considered the teams to beat by the league coaches, new addition to the conference Holgate figures to be a factor.

“We are extremely familiar with Stryker and Pettisville as they have been a regular on our schedule before the change”, said head coach Scott Giesige.

“We are also familiar with the rest of our BBC opponents having scrimmaged them over this past summer and years previous. It should be a very competitive battle for the top spot in the league this season.”

Here are the previews for each team in order of their finish in the BBC last season.

WEAKNESSES: No experience after returning starters

SEASON OUTLOOK: “We always have high expectations, but we recognize although we have 3 returning starters from an 18-4 team but we will need to develop other talent to fill out the roster.”

“We have zero experience outside of our three returning starters and that is a concern. I think our roster has some young talent, but they are unproven at the varsity level and will need time to develop.”

“We have great, high, character kids. This leads me to believe we will continue to improve as the season goes on.”

“Our schedule this year is more difficult. Most of our out of conference games are against teams who have a lot returning from last year.

“We are very disappointed in the fact that due to COVID school enrollment was carried over from the prior count. Once again, we are literally one girl over the count to be D3 instead of D4.”

“In the BBC, I think Hilltop and Holgate will be the frontrunners.”

ABOUT THEIR SCHEDULE: The Locos start the season with a nonconference game at Hilltop on November 19th and start BBC play at Fayette on December 17th.

SEASON OUTLOOK: “We are looking to be competitive every night we take the floor. The league should be very competitive.”

“Montpelier returns a very good nucleus of players and have been league champs the past two years, so they are still sitting at the top entering the season.”

“We have Holgate entering the league this year also. I’m sure the remainder of the teams have been putting in the work this summer and getting much better.”

“As a result, this should make for very good basketball every time the league takes the court versus each other.”

ABOUT THEIR SCHEDULE: Hilltop opens the season with a nonconference tilt against Montpelier and will travel to Pettisville on December 17th to begin their BBC schedule.

STRENGTHS: Return four starters from last year’s team with three of them being multiple letterwinners

WEAKNESSES: Lack of depth and experience off the bench; will need younger players to contribute at the varsity level.

SEASON OUTLOOK: “There should be strong parity and competitiveness in the BBC from top to bottom.”

“Montpelier and Hilltop look to be the favorites. We hope to improve upon our third-place finish from last year and make a return trip to the districts.”

ABOUT THEIR SCHEDULE: The season is slated to begin on November 19th with a trip to Edon for their nonconference matchup and the league schedule starts at home versus Stryker on December 17th.

SEASON OUTLOOK: – “We are excited to be back to an almost “normal” year where we can just play the game of basketball.”

“I have a positive outlook on our season with the effort the girls have been putting in already and with the returners that we have.”

ABOUT THEIR SCHEDULE: The Lady Panthers host Pettisville on November 19th to start the season with league play starting on December 17th with a trip to North Central.

SEASON OUTLOOK: “We have eight returners from last season, they work hard, compete and have done a great job of bringing our younger girls along.”

“When we match up against teams with some height/length, it can be challenging for us on both sides of the ball.”

“We need to continue to improve on knocking down shots from the outside.” “We want to compete night in and night out and be competitive in the league.”

ABOUT THEIR SCHEDULE: Edon hosts North Central on November 19th in their season opener before starting their BBC schedule at home against Holgate.

STRENGTHS: Willingness to work, play hard and want to compete.  We should be a balanced team with decent speed

WEAKNESSES: It will take time to adjust to different roles by most of our players

SEASON OUTLOOK: “We want to compete each night and keep improving. We plan to contend night in and night out.”

“It will be a different look with adding Holgate to the league and going to a single round instead of a double round.  It could make things interesting.”

ABOUT THEIR SCHEDULE: Pettisville starts the season with a nonconference game at Stryker on November 19th and will start league play on December 17th at home versus Hilltop.

WEAKNESSES: Low numbers (only 13 girls in high school program); not much scoring returning from last year

SEASON OUTLOOK: “We have a lot of girls returning, but they will have to play more significant roles this year.”

“We will have to find scoring threats since all returning players averaged less than 3 points a game individually, and about 10 points combined.” “If we progress as hoped, we could be competitive with most of the teams on our schedule.”

“Holgate is joining the league this year and they should compete to be at the top of the league.”

“Montpelier, North Central, and Hilltop all return a strong nucleus of players and should be league title contenders as well. The league in general, should be fairly balanced.”

ABOUT THEIR SCHEDULE: Fayette travels to Ayersville on November 20th for their season opener and will host Montpelier on December 17th in the BBC opener.

STRENGTHS: Some of our strengths will be our defense, rebounding, depth, and experience this upcoming season. We have a few versatile players that will allow us to match-up well and create mismatches for ourselves.

Our biggest offensive strength will be our ability to score inside as well as play inside out around senior center Justine Eis who was 1st Team All-Conference & 2nd Team All-District last season.

WEAKNESSES: First our biggest weakness is taking care of the basketball. Last year we averaged just under 20 turnovers a game. If we want to reach our team goals and our full potential this year, we have to limit our turnovers especially those that result in easy baskets for our opponents.

SEASON OUTLOOK: “With 7 returning letter-winners we are looking to be improved over last year’s 8-15 season.”

“For us to be successful and reach our goals we must keep getting better defensively. I thought we showed great progress both defensively and offensively by how we played at the end of last season and over this past summer.”

“Fellow senior Carissa Meyer’s continued improvement from last season and through this summer will add some needed offensive production.”

“Our overall team success will be dependent on how good we become defensively and if we can get balanced point production from our other returning letter winners, juniors Lexa Schuller, Jordyn Altman, Olivia Blaker, Elisabeth Willett, and Madison Clark.”

“We also have a couple of other players looking to make an impact and add some more depth off our bench. They are junior forward Paisley Wilhelm and sophomore combo guard Miriam Bower. Both these players are 5’9″ and give us added length in our rotation which should help us out defensively.”

ABOUT THEIR SCHEDULE: Holgate opens the season at former GMC rival Edgerton on November 19th and then will make their BBC debut on December 17th at Edon.