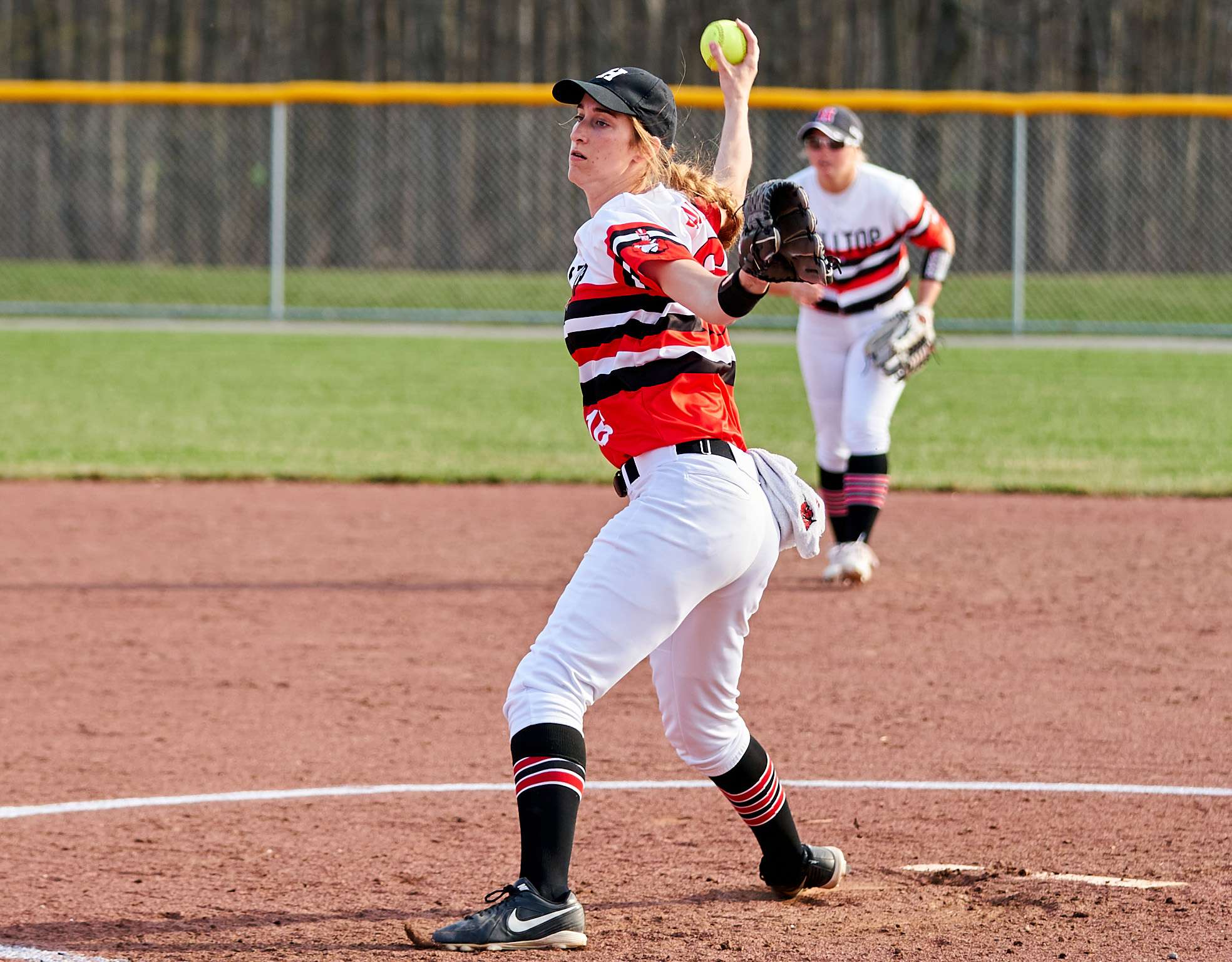 NO-HITTER … Hilltop senior Lana Baker winds up to deliver a pitch during her no-hitter last year at Fayette. (FILE PHOTO)

Hilltop will be in search of their ninth straight BBC title this year as they look to fill the void left by the graduation of a tremendous senior class.

The Cadets, who went 28-4 on the year, will bring back seven letterwinners from last year’s regional runner-up team.

North Central, Edon, and Stryker all return key players along with last season’s BBC runner-up Montpelier as they all look to knock Hilltop of the top rung of the conference.

As with baseball, the BBC schedule will have a new look this season with the addition of the Holgate Tigers.

In the past, teams faced each other twice with both games counting toward the league standings.

This season, while some teams will still play each other twice, just one contest will count in the league meaning instead of 12 BBC games, there will be just seven this year.

SEASON OUTLOOK: “We return experience in key positions from our 28-4 team a year ago.”

“While we might not have quite as much offensive firepower as we had last season, we should still be able to consistently put runs on the scoreboard.”

“I will be hard-pressed to find replacements for my talented 2021 seniors, which included two-time BBC Player of the Year, Kodi Brenner.”

“With seven returning letter winners, however, we should be able to field another competitive squad in 2022.”

“Sophomore Joscelyn Layman and freshman Giada Rising will also see innings for us this year.”

“Additionally, senior Alex Horton was sidelined for the second time in four years due to knee injuries she suffered during basketball in 2020 and 2022.”

“As long as we can find suitable replacements, learn from our mistakes, and maintain a positive attitude along the way, we should be able to remain in contention for a ninth-straight league title.”

“Because we are returning a solid core group of seniors this year as well as some solid new talent, I feel as though we’re among the favorites to win the league.

”I expect North Central and Montpelier to present our biggest challenges this season. I feel that both should field competitive squads again this year.”

SEASON OUTLOOK: “Once we gain some experience, I expect that we can compete with anybody that is on our schedule.”

“Our pitching will allow us to stay in more games this season while our offense looks to put up more runs than last year.”

“We will compete as one of the smallest schools in a tough Division III sectional but will be gunning to win our first sectional since 2015. We’re really excited for the program going forward.”

SEASON OUTLOOK: “We have a very athletic group of kids coming back with experience from last year.”

“We made it to districts last year so they have some tournament experience and some taste of success.”

“We will have a JV schedule for the second year in a row so that will ensure that all kids are gaining some experience and competing throughout the season.”

“We are looking to improve each day and be in the running for a league title and a tournament run come the end of the season.

WEAKNESSES: Inexperienced behind the plate

SEASON OUTLOOK: “Our goal this year is to be more competitive and get more wins in the BBC.”

“We have been working hard the past few months on hitting in hopes that this year we will be more successful at the plate.”

“The girls have what it takes to be a competitive team, we will just have to continue working hard to get there.”

SEASON OUTLOOK: “We are looking to compete and find success in the BBC.”

WEAKNESSES: Inexperience due to large number of unerclassmen

SEASON OUTLOOK: “We have a great group of girls this year. I look forward to being competitive in our league this season, as well seeing large improvement from last season to this season.”

SEASON OUTLOOK: “Having only one girl with varsity pitching experience and I’m hoping our young pitchers can throw strikes.”

“How our young freshmen and sophomores perform will determine what kind of season we have.”