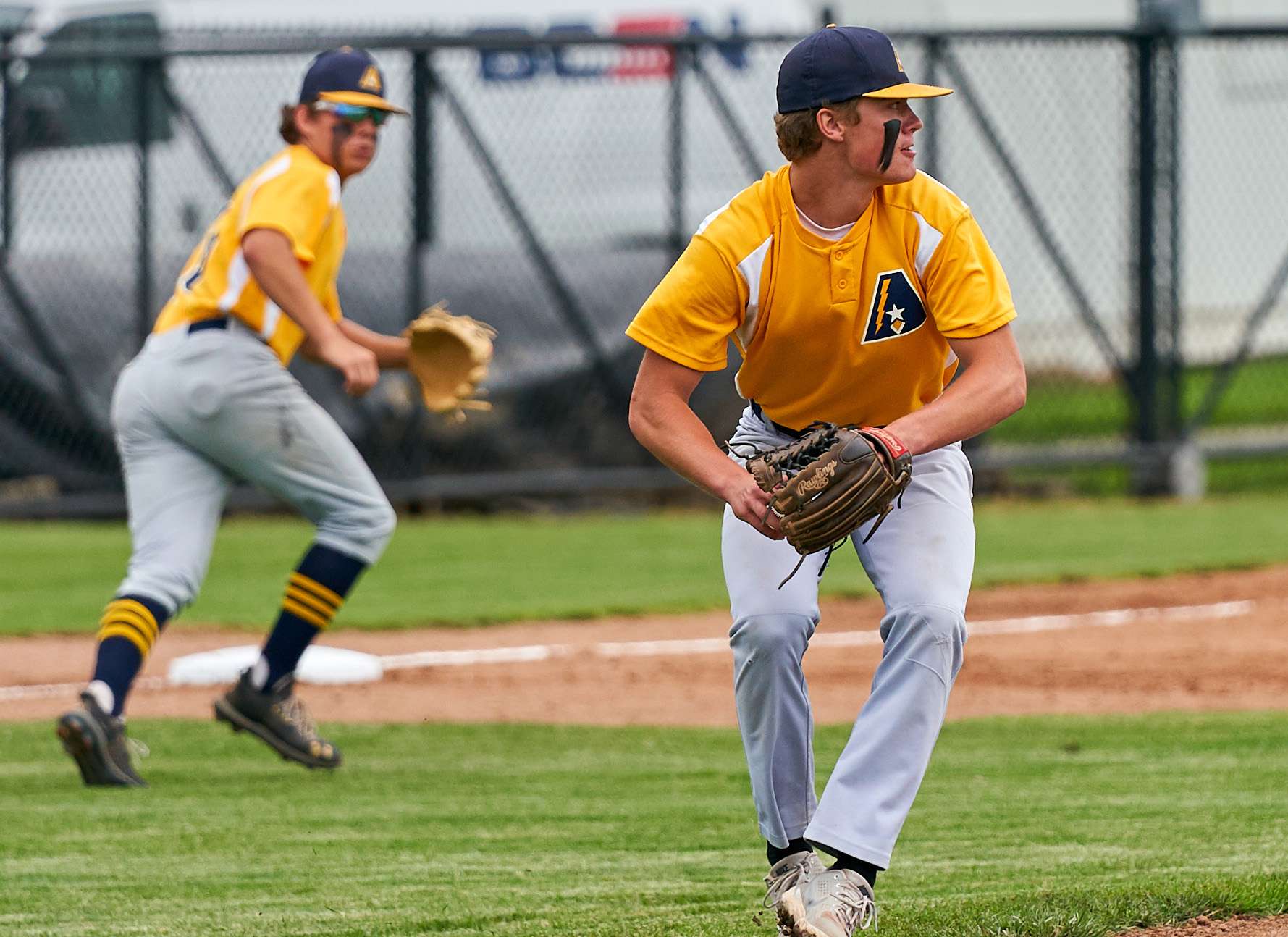 LEAGUE FAVORITES … Archbold senior DJ Newman turns to make a throw to second base after fielding a ball in front of the mound during their Division III district semifinal against Milan Edison. (FILE PHOTO)

After placing fourth in the NWOAL last season, a young Archbold Bluestreak ballclub found their stride in the postseason as they advanced all the way to the Division III state title game where they fell to Cincinnati Hills Christian Academy.

With a majority of the team returning, Archbold is considered the front runner in the NWOAL entering the 2022 season.

Another team with a wealth of returning experience are the Evergreen Vikings who bring back everybody from last season including University of Toledo commit pitcher RJ Shunck.

Last year’s league champs are on the opposite end of the spectrum when it comes to returning experience as Wauseon returns just four letter winners from a squad that went 7-0 in the league in 2021.

SEASON OUTLOOK: “We have four returning letter winners from the 2021 season.”

“All four returning letter winners from 2021 played and had an impact on our season and in claiming the NWOAL Title.”

“We have two of our top pitchers back from that team with several others who have a great deal of potential on the mound.”

“Although we do not have the big arm at the top of our rotation like we have had in the past, ten players on the roster are capable of logging innings on the mound.”

“Our defense should be solid with speed at many positions with two starting infielders and two starting outfielders returning.”

“Our hitters without varsity experience will need to grow up fast and adjust to the speed of varsity pitching.”

“We will have several capable players that are competing for varsity time and are very capable of making a big impact on our season.”

“Even though we were successful last season in winning the league title, not one of our seven victories was easy.”

“As always, I believe the NWOAL is very competitive from top to bottom. Any team could come out and play well enough to win on a given night.”

“The teams in the league have quality players returning and could make some noise.”

“With the single round league, it will come down to who stays the healthiest and gets the hottest at the right time or the right week.”

“Our scrimmages and non-league matchups against some of the best programs in the state, will prepare us for the grind of the NWOAL season as well as a run in the tournament.”

SEASON OUTLOOK: “We will look to replace five seniors who graduated last season.”

“With only three seniors in the program, we are looking for younger guys to step up and play key roles.”

“The expectations are to compete for the NWOAL title and get back to Districts.”

“Our non-conference schedule will test us in order to get ready for the state tournament.”

“Our season will depend on our ability to throw strikes consistently, make plays defensively, and do the little things offensively to score runs.”

“The NWOAL this year should be extremely competitive top to bottom.”

“Archbold and Evergreen both return the majority of their teams and have the top two arms in the league in DJ Newman (Archbold) and RJ Shunk (Evergreen).”

“Wauseon will replace a great senior class and will play hard and are well-coached.”

“Patrick Henry and Liberty Center were young teams last year who return a lot of experience this spring. Swanton and Delta should both be vastly improved as well.”

“We hope to compete every time out to give ourselves a chance to win a league title.”

PLAYERS LOST FROM LAST SEASON: None

SEASON OUTLOOK: “With an experienced group coming back this year, we expect to be competitive in every game we play this season.”

“We will rely heavily on our pitching staff and defense. Offensively, we need to have better at bats and drive in runs when guys are in scoring position.”

“After going 5-2 in the NWOAL last year, we look to be a factor in the league race.”

“The league is going to be competitive and have good balance. Hopefully, we can play good baseball and give ourselves a chance.

”This group is very motivated to continue the tradition of Archbold Baseball.”

“A strong non-league schedule including Defiance, Perrysburg, Anthony Wayne, Bowling Green, Ottawa Hills, and Sylvania Southview, plus many teams in our immediate area and league, will be quite challenging.

“It is very difficult to win a strong league, especially when you only play a single round of seven league games.”

“Evergreen will be one of the top teams to beat, as they were very good last year, and have everyone returning.”

SEASON OUTLOOK: “We look to be competitive in the NWOAL this season. We lost a lot of production from last year’s seniors and are looking to replace that production.”

SEASON OUTLOOK: “Our five seniors from last season batted 1 through 5 in the lineup. Each senior had multiple years of varsity baseball. It will be a challenge to replace that experience.”

“Our 2022 roster has kids willing to learn, get better, and compete. If the first few weeks of practice are any indication, these kids will keep improving and this team may surprise a few opponents this season.”

“The NWOAL is always a competitive league. Wauseon, Bryan and Archbold are consistent performers year after year – any one of these schools could challenge for the title.”

“Evergreen has been on the rise and will be expected to be solid again. On any given night, any team could beat anyone.”

“And with only one NWOAL match-up per opponent, that enhances the importance of every league game.”

REQUESTED INFORMATION NOT SUBMITTED BY DEADLINE

SEASON OUTLOOK: “We have a little experience from last year, but we have good team chemistry. And if we can learn something from every game we play, I believe we will be able to compete with anyone.”

“I think we play in one of the toughest leagues around, it will be a grind.”

“Archbold is coming off a runner-up at the state tournament and Evergreen having 11 seniors. Wauseon and Bryan are always in the mix also.”

Be the first to comment on "2022 NWOAL Baseball Season Preview"