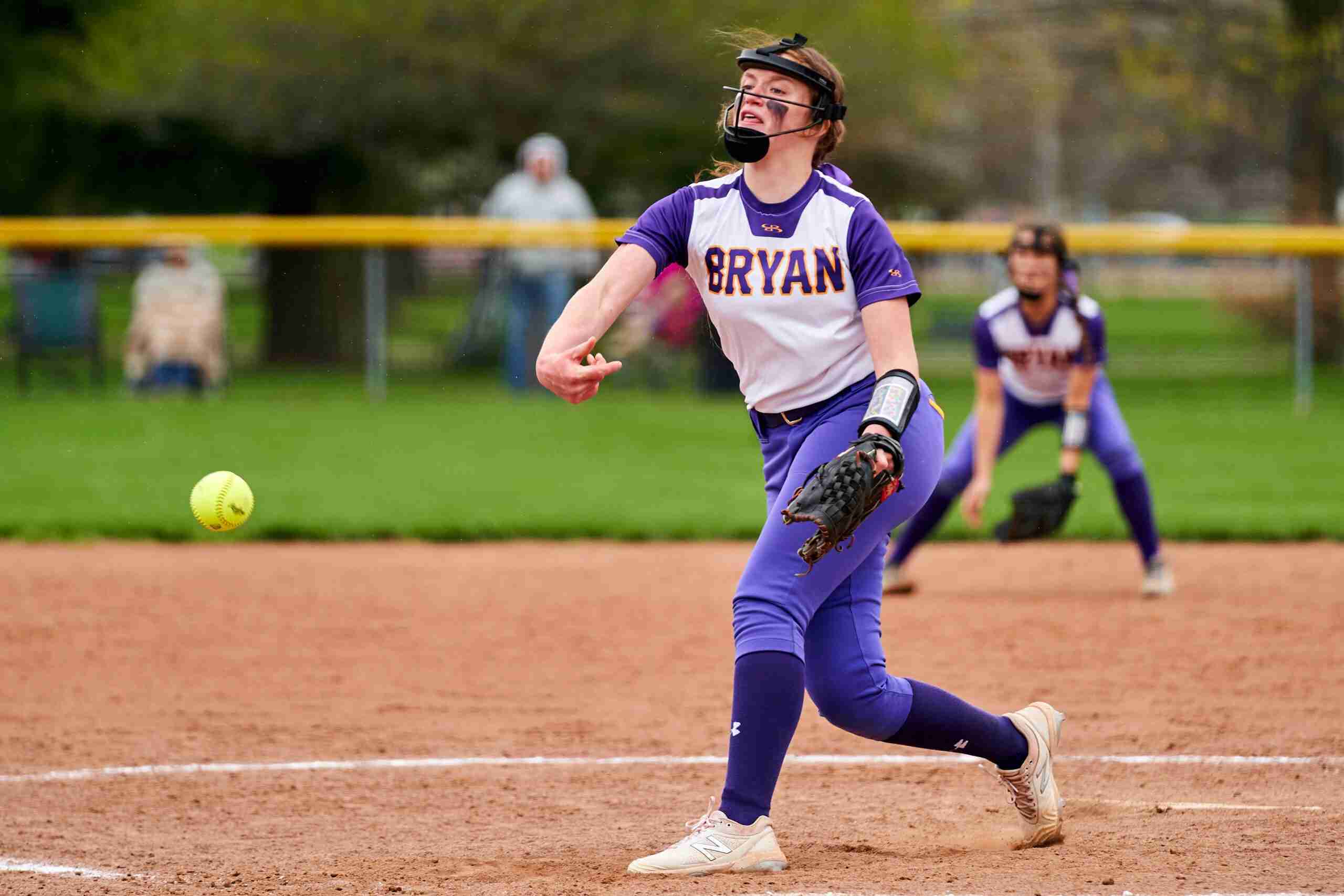 LOOKING TO REPEAT … Bryan ace Addie Arnold unloads a pitch in a NWOAL game versus Wauseon last season. Arnold is the reigning NWOAL Player of the Year and looks to guide Bryan to another NWOAL title. (FILE PHOTO)

The Bryan Golden Bears return the NWOAL Player of the Year in Addie Arnold has they try for a second consecutive league title.

Evergreen, who shared the championship with Bryan last year, figures to be in the race again despite losing their starting pitcher Breanna Huffman to graduation.

There will be two new coaches in the NWOAL this year and a coach who returns to the dugout after a couple years away.

Nick Lavinder takes over in Wauseon, where the Indians have plenty of seniors to replace off last season’s district championship team while Jim Zoltowski is the new head coach for defending league co-champs Evergreen.

WEAKNESSES: Inexperience at 3B, 2B, and 1B

SEASON OUTLOOK: “Evergreen tied in the league with us last year. We know they will be strong coming into 2022 again this year.”

“We also know Archbold and Wauseon will continue to be strong teams, as well as the rest of the teams in our league.”

“Each program in our league has a chance to knock off someone on any given day. Our goal is to compete for a NWOAL Championship on a yearly basis.”

“We want to continue to build this program to compete in the NWOAL and Division II.”

SEASON OUTLOOK: “Our goal is to compete for a league championship and go make a long run in the postseason.”

“Within the league and only playing each team, no team can be overlooked.”

SEASON OUTLOOK: “We come into the season losing nearly 97% of their offensive production from 21’.  Pitching and defense will need to be the calling card for us in 22’.”

“We lost sophomore starting catcher and All-NWOAL performer Bea Barrett to a knee injury during basketball.”

“Given all of the losses of offensive production from 21’ our focus will be offensive creativity and pitching.

“Offensively, we expect to be led by juniors Dulaney Krugh and Maddie McBride, both are projected to start and play important roles in the lineup. “

“A lot of untested players will be relied upon on the offensive for 22’.”

“As far as the league, Bryan feels like the NWOAL leader with Addie Arnold returning the mound.”

“Wauseon, Archbold and Swanton are also going to be contenders in 22’.”

SEASON OUTLOOK: “Our pitching will be solid. I look for Wauseon, Bryan, Liberty Center and Evergreen to be at the top of the league.”

SEASON OUTLOOK: “We feel optimistic about the upcoming season. We will be trying players in several different positions.”

In the NWOAL, Bryan will be tough with the returner player of the year in the league and Archbold will have a solid team. “We have to make every play and every game count.”

STRENGTHS: Strong focus and desire to get better every day; team chemistry

WEAKNESSES: Replacing a four-year starter at SS and some other key positions; unproven consistency at the plate

SEASON OUTLOOK: “Our goal is to be playing our best softball of the year as we approach tournament time.”

“We will have another very challenging non-league schedule, which will help us prepare for our NWOAL contests.”

“It will probably take some time for us to fit all of the pieces together and to adapt to the new roles that our newcomers are being asked to fill.”

“Every year our goal is to battle for the NWOAL title and make a nice tournament run, and this year is no different.”

“It will take a group of young ladies that can maintain a strong focus through the ups and downs that come along the way, and who are committed and determined to work together for that to happen.”

“We had a great off-season and we are excited to get back on the field and compete!!”

“There will be some great competition in the NWOAL again this year. Several league teams return key players that will make each league opponent we face a tough test.”

“I believe that there could be several teams fighting for the right to call themselves NWOAL champs at the end of the season, with Bryan being at the top of that list.”

STRENGTHS: Players are willing to work hard every day to improve on their game

SEASON OUTLOOK: “We hope to be more competitive this season. Looking to get better every day.”

SEASON OUTLOOK: “The program hasn’t had many wins for several years. “We want to become a strong and confident program with tradition.”

“We’re hoping to be able to build from last season and compete in most games.”