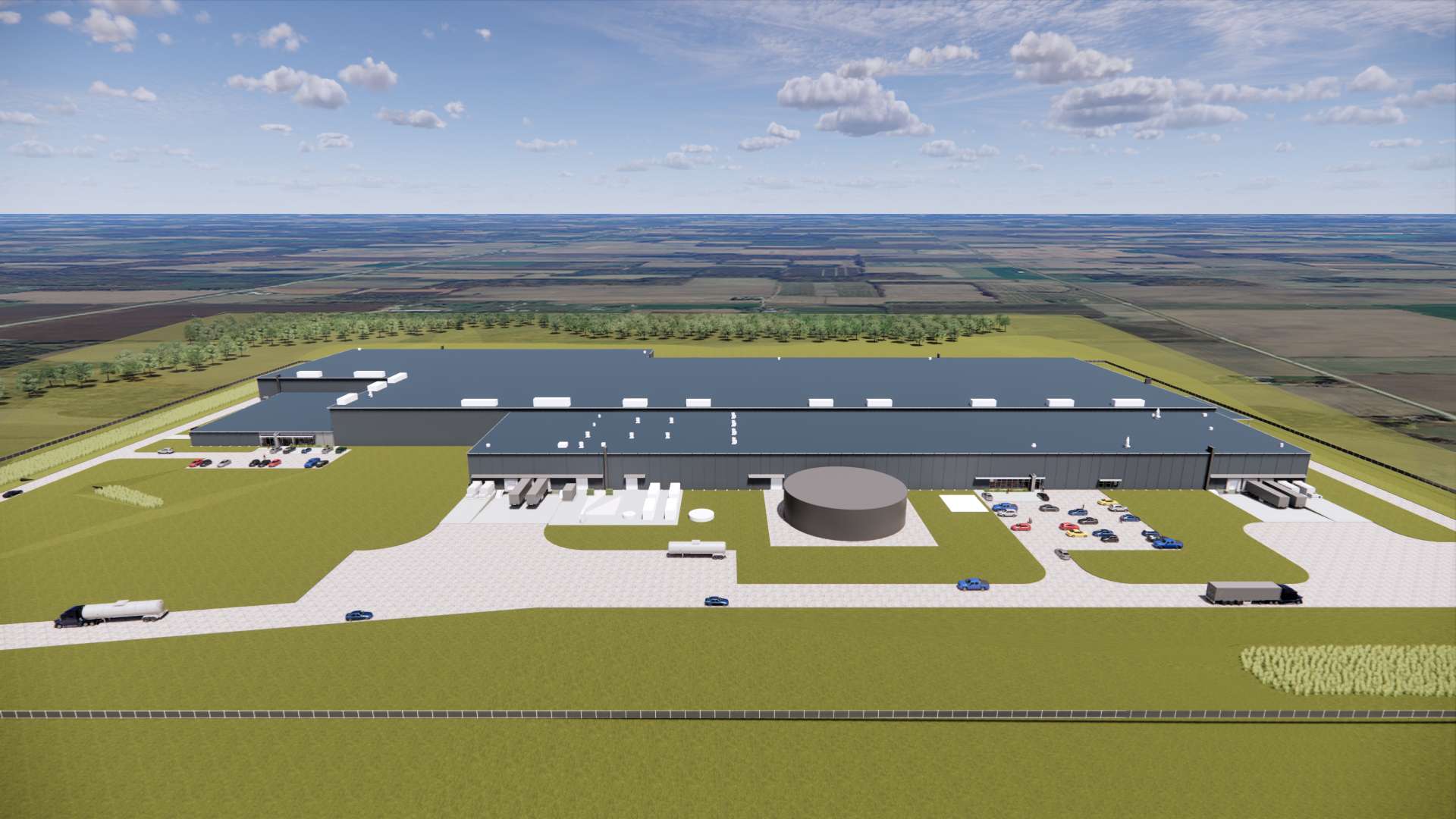 AQUABOUNTY … A mock-up for the exterior of the new AquaBounty facility is shown here. Plans are currently set for the company to break ground in April. (PHOTO PROVIDED)

Most marine aquaculture production in the US currently consists of oysters, clams and mussels with salmon and shrimp making up most of the rest.

The problem however is that the US is only considered a minor aquaculture producer and is ranked 17th on the global scale as of 2018.

The US is the leading global importer of fish with 70 to 85 percent of seafood being imported. Nearly 50 percent of that number is produced via aquaculture already but produced in another nation.

Aquaculture is a big commodity in other nations but has never really taken off in the US. In fact, numbers show some species sectors for aquaculture in the US remaining flat to decreasing since the early 2000’s.

Some spurts of growth have shown up across the country for some species but, for the most part, the US does not have an aquaculture community that is able to challenge the status quo.

AquaBounty has a plan to help change that with the addition of their new facility in Pioneer. The facility will take up 479,000 square feet and will produce around 22 million pounds of fish annually.

The only salmon farm in the US that comes close to that capacity resides in South Florida. The company started their site search through the Regional Growth Partnership back in April of 2020.

The AquaBounty facility in Pioneer will be state-of-the-art for both the fish and the water treatment facility that will be on-site.

The same amount of water will be released into the St. Joseph River which flows to Fort Wayne, Indiana before connecting to the Maumee River, and ultimately going into Lake Erie.

Before water makes its way to the river, it is processed inside the water treatment part of the facility.

According to AquaBounty CEO Sylvia Wulf, the treatment facility will provide clean water to the river. “The water will be cleaner when it leaves than when it was brought in.”

According to a report released by AquaBounty, water will be subjected to an effluent treatment plan consisting of biological and nitrate removal, solids/phos removal, and a disinfectant process.

These requirements are regulated by the Ohio EPA who will also approve the wastewater facility before it is put into use and will also regulate it after use has begun.

It was the opinion of these experts that the facility will reach a peak discharge rate of 8.0 cfs which will be 0.3 percent of the estimated 2-year storm rate of 2,180 cfs.

During dry weather conditions, the discharge rate may increase to a maximum of 13.9 cubic feet per second, which will also have negligible effect on the river.

In Mr. Bardol’s opinion, “the additional water would likely improve the ability of the East Branch of the St. Joseph River to sustain a robust population of aquatic fauna.”

Throughout the process that AquaBounty initiated to have the facility placed in Pioneer, there have been concerns from members of the public regarding these issues discussed above, and what the effect will be on the aquifer.

Many farmers and residents in the Pioneer area rely on their wells to consistently supply them with water. During the test phase for the AquaBounty water supply, nearby wells for area farmers did go dry.

According to Pioneer Mayor Edward Kidston, these wells were close to where the test well was and were older wells that were not drilled very deep.

He also explained that there will be a cone of depression around two to three miles in diameter where the AquaBounty well be drilled. This depression may cause close to a 25-foot drop with the water level that wells use to supply their water.

The further you go from the well, to the 2-mile mark, the water level depression should only be around 2 to 3 feet with the level being unchanged from its original amount at around 3 miles.

“AquaBounty does not want to run anyone out of water. With what happened during the test pump, AquaBounty wrote the farmers a check and paid for new wells, in full, in order to make sure their issue was solved.

Wells drilled with in the past 30 years should not have a problem since they started to drill deeper at that point,” said Mayor Kidston.

Still, numerous members of the public have expressed their concerns. A Williams County Alliance set up to protect the “Michindoh Aquifer,” has been fighting against the “over usage” of the aquifer for years.

Alliance member and former Water Treatment Plant Supervisor for the City of Bryan, Andy Struble, spoke to the Village Reporter during the OMI meeting which was previously reported on.

Mr. Struble stated that he is concerned with “people overusing the aquifer, and it takes too long to recharge.” “I think they are not admitting that.

It (the life of the aquifer and the amount of water in it) is mainly about recharging the aquifer,” he said, going on to explain that an aquifer gets recharged mostly by the rain, some by streams and rivers.

“You can’t put a 5 million gallon draw on an aquifer without causing problems. That constant pumping and dumping is going to do damage.”

He feels the company could cool their waters with coolers instead of using the water to cool their tanks. “In my opinion the recharge will be insufficient and the test well drilling, the boring, it doesn’t look like they have the structure to pull that much water through the aquifer.”

“They are going to need four or five wells so they can rotate them for maintenance.”

“Their engineering firm says they can pump all they need from the one well field but I don’t think they can. It is going to draw the water out and cause a cone of depression and it will affect some residential wells.”

“It is going to take the water levels down around Pioneer and in Michigan and it only recharges two to seven inches of rainfall per year, so it won’t support that kind of pumping.”

“When there is flooding, it is going to flood the river even more than normal. On February 17, after all the rain and ice melt, the flooding was just a few inches from going over the bank at Lake Pioneer.

If you add 5 million gallons a day to that it is probably going to push that flooding up and make it worse. That is not a good situation.”

It is important to note however that the ODNR stated in their Frequently Asked Questions portion of the AquaBounty 90-day review and comment period that the aquifer is able to handle the withdraw.

It states, “The reviewed Report found it improbable that this 3 MGD withdrawal could result in a significant lowering of the water level in the aquifer outside the Geographic Area, the over drafting of the aquifer, or irreparable damage to the aquifer, due to the high resilience of the regional aquifer system established in the numerous studies and data mentioned above.

The daily inflow alone into the aquifer in Williams County has been estimated by USGS to be 200 MGD. Thus, the supply potential of the aquifer can sustain the 3 MGD withdrawal proposed in the Application.”

As part of their permit approval, AquaBounty must submit a detailed ground water monitoring plan for the Chief’s review and approval that provides for the monitoring of ground water levels inside and outside the geographic area, as well as the surface monitoring of Lake Pioneer and the St. Joseph River.

Monthly monitoring and reporting for one year will then take place after the stabilization with quarterly reviews taking place after that.

Once AquaBounty’s facility has been built, the water has been pumped and the fish are grown, the local area will see another change. AquaBounty will create 120 to 140 jobs new permanent jobs after construction is complete.

400 temporary jobs will be created during the construction period. Pioneer Mayor Kidston says that these jobs alone will provide a much-needed boost for the community.

“It is not often that a town of 1,500 people has a company come in and spend this kind of money. We will not end up with 400 permanent jobs, but these workers will spend a majority of their time in our community.

Monday through Friday these people will be living in Williams County, bringing in more money for our community which will help in numerous ways.

AquaBounty will also be providing $750,000 to $1 million a year to the North Central School District for the next 15 years.”

“This money will be used to educate our kids. Our town will also benefit from the income taxes, payroll taxes, real estate tax and electric tax.”

“We are still going to be little old Pioneer but there will be more resources that we can use to do stuff with. I had a lady the other day say, hey are we thinking about still putting in a splash pad for the kids?”

“We are still thinking about that, but it takes money, and it is this type of growth that that will help us to do that and other things we have not been able to do before.”

According to the Executive Director at WEDCO, Megan Hausch, the annual payroll for employees at the new facility will be around $5,445,912.

These jobs cover fields that do not currently exist in Williams County or the region.

“Diversity in jobs is a workforce attraction tool. I think that is a huge win for Williams County and Pioneer. The local and regional impact to the economy is tremendous.”

The Economic Development Office has played and will continue to play a key role in business retention and attraction for the area.

It does not take sides on projects or determine if a product is good or bad but does work with them when requirements are met.

Now that those requirements have been met, AquaBounty CEO Sylvia Wulf stated that they want to help the community by being good neighbors.

“We have an excellent relationship with the people near our area in Indiana. We want to see the same types of relationships in Pioneer.”

“We want to create jobs and invest in the schools which will help people to have more disposable income.”

“The talent we need is going to come from the community and if we can help support the school districts, we can help create more talent.”

Ms. Wulf also explained that over 1,200 comments were made from members of the public and that the company’s responses are on the ODNR’s website.

She also explained that AquaBounty is still a small company. “We are a little company with around 100 people in the whole organization. This big farm is a big step for us yes, but we are still small.”

“We aren’t big enough to push anyone around. The government organizations involved don’t have any incentive to get this wrong.”

“We have continued to have conversations with the Governor’s office and representatives in Washington. The US doesn’t really have an aquaculture history.”

“Between our locations in Ohio and Indiana, we are creating an industry that doesn’t exist today.”

Currently the new AquaBounty facility will break ground in April. A three-year time frame is expected before construction will be complete according to Mayor Kidston.