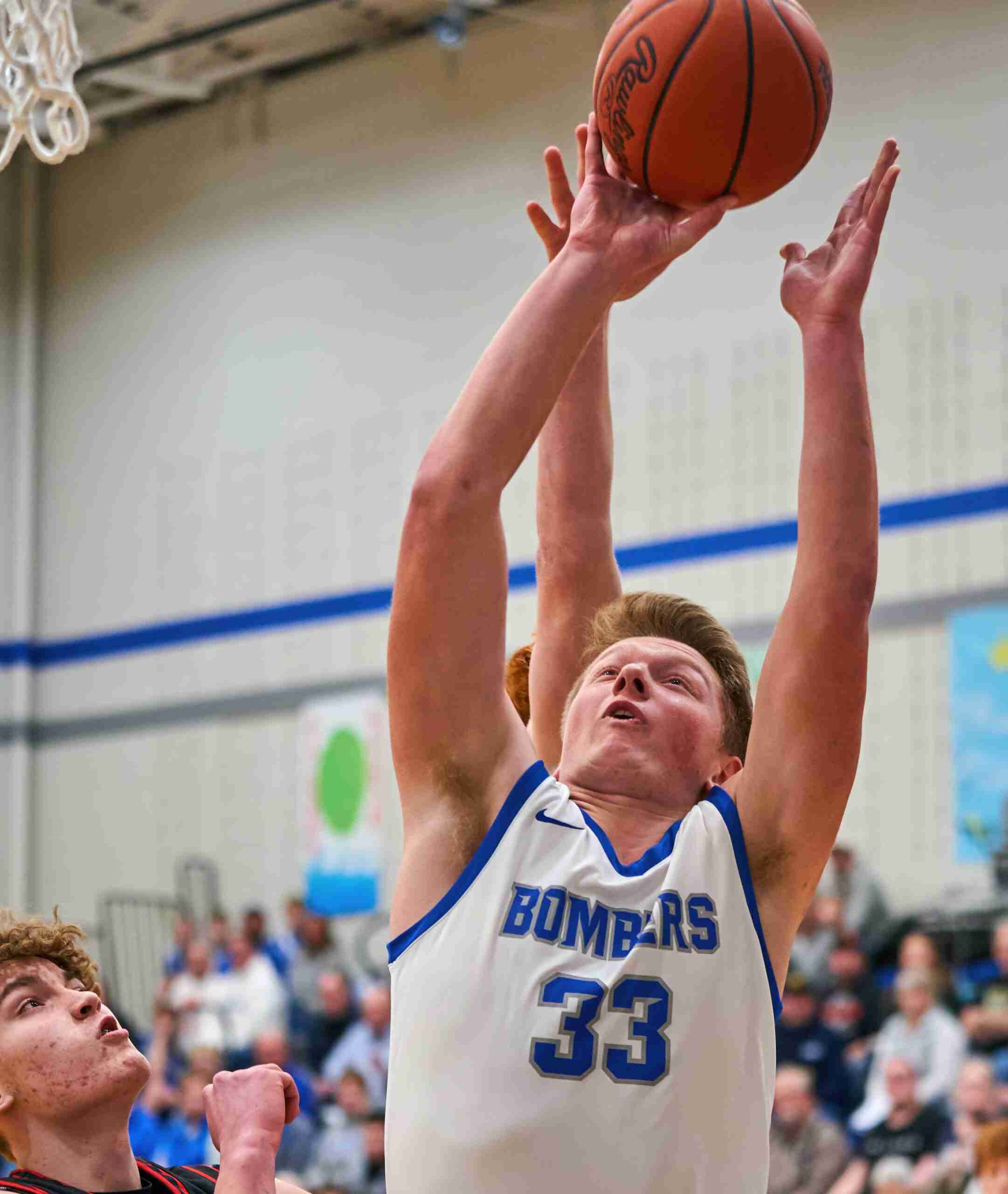 BBC BATTLE … Drew Gallehue goes up for two of his game-high 16 points (14 in first half) in Saturday’s win over North Central. (PHOTO BY RICH HARDING, STAFF)

EDON – The Eagles trimmed a 16-point second half lead by Edon down to six in the fourth quarter before the Bombers closed the game with a 12-2 run to hand North Central their first BBC loss 59-43.

North Central would get the first two scores of the game with buckets from Zach Hayes and Landon Justice for a 4-0 lead.

The lead was brief though as Edon ripped off 13 unanswered points featuring a three-point play by Drew Gallehue on an offensive rebound and Cassius Hulbert scored down low to make it 13-4.

The second quarter started with a Caden Nester trifecta for Edon followed by two free throws from Ben Petit for the Eagles to make it 18-9.

A layup by Ethan Steinke started a 7-0 run for Edon as the lead ballooned to 25-9 at 4:48 mark of the second quarter forcing North Central coach Chris Fidler to burn a timeout.

Edon was able to maintain a 12-to-16 point advantage for the remainder of the half and a Gallehue offensive rebound stick back at the buzzer gave Edon a 35-21 lead at the break.

The Bombers continued to hold a comfortable lead through the third quarter as another triple by Nester built their lead to 44-29 before Cohen Meyers added a field goal for the Eagles to end the quarter.

A bucket by Edon’s Carter Kiess started the scoring in the final stanza before North Central would begin to chip away at the Bomber lead.

The Eagles put together an 8-0 surge starting with a triple by Hayes and ending with Hayes going coast-to-coast after a steal for a hoop and a foul to cut the deficit to 46-39 after the three-point play.

The Bombers responded though beginning with a layup by Kiess, a breakaway dunk by Jack Berry, and two foul shots from Kiess to push the lead to 53-41.

After a Hayes layup for the Eagles, Edon closed the 12-2 run to end the game with consecutive fast break layups from Kyler Sapp and a 2/2 trip to the foul line by Berry.

“We talked about being the hunter instead of the hunted before the game”, said head coach Matt Ripke following the game in reference to his team’s aggressiveness (27-17 rebounding edge, forcing 16 Eagle turnovers).

Edon finished 11/16 (5/8 in the fourth quarter) at free throw line, which is an area that proved costly in a loss to Pettisville last week.

“We’ve got to step up to the line with confidence and make free throws”, commented Ripke about his squad’s improvement at the line.