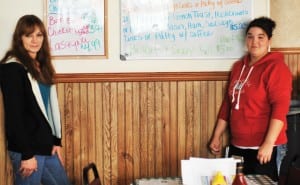 Joe’s Bar and Grill is located at 100 N. Defiance Street in Stryker. It is currently owned by Joe and Jeanine Malfait, but its day-to-day operations are handled by the manager, Tanya Axsom. Ms. Axsom has been managing Joe’s since it opened way back in November of 2012 – just one short month before the world was supposed to end, but we’re still here and so is Joe’s Bar and Grill.

The exact date of the opening was November 5, 2011 at 6 a.m. The opening had not been advertised so Tanya had been worrying how long it would take for customers to trickle in. As it turned out, not long, shortly after the official grand opening which consisted of unlocking the door and turning the sign, a man walked in and asked if they were open, really open, to which Tanya said, “Yes, we are.” The man got right on his phone and, with the arrival of the man’s friends, Joe’s seated their first full table and, by meal’s end, had their first five dollar bill taped securely on the mirror behind the bar.

“Business is increasing,” said Manager, Tanya Axsom, “We’re new to the area and lots of people already have their ‘place’ so we’re just trying to get some of them to come try our place and see how they like it.”

Tanya is definitely giving Joe’s a great chance to convert some regulars because Joe’s has a lot to offer the potential customer: anything from good food (breakfast is served all day), to TV, maybe shooting some pool (for free on Saturdays), singing karaoke (once a month on Saturdays), picking the tunes on the Juke Box, listening to Doug Feiley (Defiance College Art Teacher previously of Stryker Schools) play some acoustic guitar every Thursday just like he used to do in the last bar that was at this address, or coming down to stuff yourself for the sake of competition in the Taco Eating Contest on Thursdays. There’s really something for everybody here.

The Taco Eating Contest is a pretty cool story. It wasn’t a promotion or anything set up by the management or owners, it was just something that happened with the regular customers on Thursdays (taco night). It became a regular thing and is now an official happening so come on down and check it out.

Other than tacos, Joe’s has a great variety of home-cooked meals, some on the menu every day and others have their days throughout the week. A customer can always get eggs, sausage, pancakes, French toast, hash browns, home fries, or biscuits and gravy no matter what time of day or day of the week. Some daily specials include beef and noodles, lasagna, fish fry, prime rib, and tacos. Joe’s also has Bud Lite, Budweiser, Yuengling, Miller Lite, Coors Lite, and Miller Highlife on tap.

So whether it’s having some fun, meeting some friends, watching the game, or just starting your day off with a good breakfast at the only place in town that lets you make it an Irish, come check out Joe’s Bar and Grill, open from 6 a.m. to 1 a.m. Monday through Saturday, it’s bound to be a good time.

Be the first to comment on "Breakfast, Lunch, Dinner, Drinks & Friends At Joe’s Bar And Grill In Stryker"