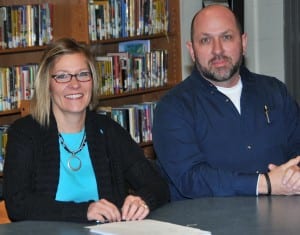 EDON BOARD OF EDUCATION OFFICERS … During its Reorganization meeting, members of the Edon Northwest Local Board of Education elected Jill Jacoby and Brad McCrea to serve as President and Vice President, respectively, throughout 2013.

Jill Jacoby was elected President of the Edon Northwest Local Board of Education during its Reorganization Meeting held Tuesday, January 8, 2013 at 6:00 p.m. in the Edon Schools Media Center. Elected Vice-President was Brad McCrea; both terms are for one year.
Additionally at this time, the Board approved:

Board members also agreed to serve on the following committees:

With approval of 2013 Reorganization Items and Appointments as presented, the meeting was adjourned to regular session.