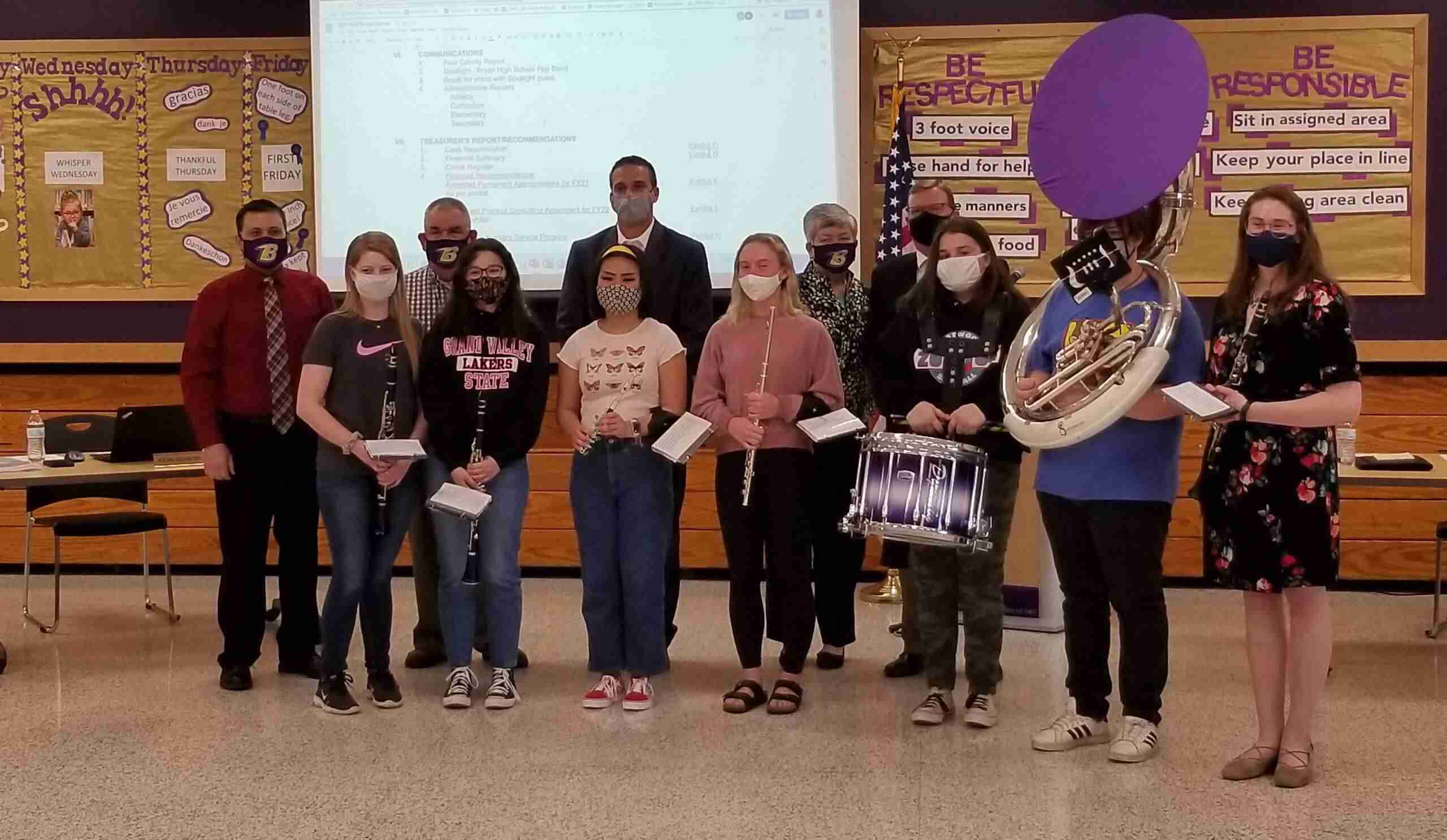 PERFORMING FOR THE BOARD … Members of the Bryan High School Pep Band perform for the Bryan Board of Education.

The Bryan Board of Education met on April 12th in regular session. All members were in attendance.

The meeting opened with Public Hearing of all monies given to the District from Federal Funds. This includes both Bryan City Schools, and St. Patrick’s Catholic School.

The breakdown is as follows: Title I which is derived from low income students- $332,702, Title II which is a class size reduction grant- $58,850, LEP Title III which is a Limited English Proficient providing tutoring- $1593, Title IV Well Rounded Education Grant focusing on social and emotional learning- $28,032, Special Education Part B-$497,017, and Early Childhood Special Education- $15,998.

Following this, the regular meeting was called to order. The Board was presented a Spotlight on the Bryan High School Pep Band. The small group performed the school’s fight song for the Board.

The Athletic Department announced that the sports “dead week” will be July 5th-9th. During this time no athletic practices will be held. Spring National Signing Day will be held on May 5th.

The Board passed Administrative Recommendations for an amended College Credit Plus Memorandum of Understanding adding Lourdes College to those already approved. It was also approved to allow both the Choir and Band to join for a school trip to Washington D.C. March 17th-21st 2022.

Typically, the band goes one year and the choir the next. Due to the fact that the band trip to Toronto was cancelled this year due to COVID to decision was to have a joint trip.

In personnel, John Betts was cleared to return as a bus driver. 3 Drivers- Erica Hageman, Tristan Slicker, and Jennifer Vogelsong were approved as On-Board Instructors which will be paid as they work. Jennifer Stratton will transition to Middle School Secretary for 2021-2022, and Paige Gansmiller will transfer to 5th Grade Intervention.

Finally, the Board approved Stephanie Lamore as an Auxillary Services Personnel Clerk for St. Patrick’s and Adriana Dockery as a Part-Time Intervention Specialist.

Important dates coming up: May 8th Prom beginning at 8:30, May 17th Academic Booster Club Awards night at 7PM, May 24th Senior Scholarship Night at 7pm, and May 30th Graduation at 2pm.

The Next meeting of the Bryan Board of Education will be May 10th.

Jeremy can be reached at publisher@thevillagereporter.com