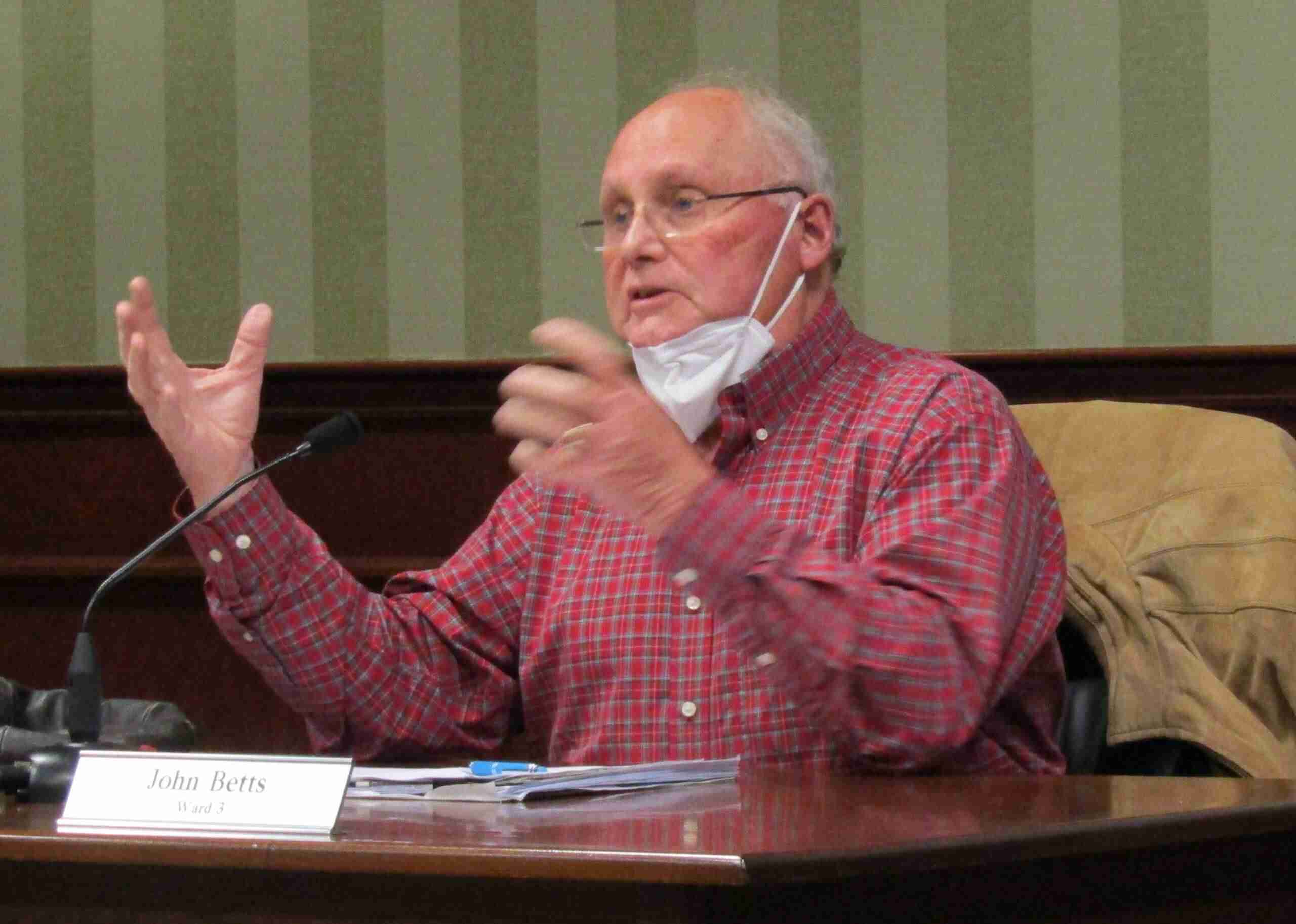 Resolution 20, 2021: Resolution to accept an $8,000 donation from an Anonymous Donor and $2,119.56 Donation from the Kiwanis Club of Bryan to the Parks and Recreation Department for Harmony Park Equipment.

Ben Dominique explained, “The money will go toward Harmony Park Playground Equipment. The current equipment will be added to at East End Park that was put in approve with Councilwoman abstaining.

Hearing of Public Concerns: Jason Johnston [address given] stated, “Sometime late winter, early spring a tree was cut down out by the street, it was marked, I guess for stump removal but that hasn’t happened yet, but I don’t know the timeline. In doing so there was on slab of sidewalk that was removed which I’m assuming was to get to the stump removal.”

“However, at this point, it was probably removed over a month ago and there are orange barrels on each side of the sidewalk which is an eyesore. I get it is what it is, but at the same time my kids, the neighbor kids, I can’t, and other people can’t use the sidewalk.”

“Two bags of cement to replace that slab, I guess I’m not sure why that patch of sidewalk had to be removed so soon before getting to the stump removal.”

Mayor Schlade asked, “Did you ever reach out to the parks director, Ben Dominique?” Johnston replied, “No, I wasn’t sure who to reach out to.” The Mayor, “I wasn’t aware of this situation either. Would you mind if I send you email after I coordinated with Ben to see what the timeline is for that?”

Further discussion ensued of exactly where Johnston’s location is to the location of the park.

An employee of the street department (Tyson) explained, “Pieces of concrete were taken out and it’s been about a month ago and we’re working on the stumps, they’re just taking longer than expected but we haven’t forgotten about it.”

“We don’t have a timeline but hopefully, within the next couple of weeks. We’ve had close to a hundred stumps to do this year.”

“We didn’t do them last year because of covid and we hired a contractor to cut the trees down, but we still have to do the stumps, so we’re working on them.” The street department will be reaching out to Mr. Johnston to resolve the issue.

A motion approved to take it off the table. The Bryan Development Foundation (BDF) hosted a meeting and Mr. Davies, president of BDF, came to the podium and asked if there were any questions from the report that was filed with the city.

Councilwoman Yahraus spoke regarding, from the meeting, “The buildings uptown were intended for other purposes. What were they talking about?”

Mr. Davies responded, “The context of what that comment was about is that these buildings were built in the 1800s. They were built as general stores and for other purposes in 1880 versus, perhaps, as what we’d like to see them occupied today. So, a different era and a historical context.”

Councilwoman Yahraus pointed out another comment from the meeting, “Less activity, less attractive.”

She went on to say, “My thinking is, aren’t empty storefronts less attractive than having them filled up?” Mr. Davies responded, “So, that is the impact of vacancies and everyone in the room agreed that day that less activity, less attractive and those are the impacts of vacancy. So, they are agreeing with you.”

Councilwoman Yahraus then said, “So, they’re combining those two, I took them as separate.”

Mr. Davies went on to explain that in the report subject lines were used to facilitate the meeting such as, “What were the possible causes of vacancy, what are the negative impacts of vacancy, and then moving on to community values we wanted to hold when addressing this issue, and then we talked about legislation overall, and then plans going forward and solutions.”

“Perhaps this is part of a solution at some point in time, but maybe not the best way to lead off. Maybe there are some additional ways to approach this topic.”

Councilman Betts added, “I also think it was in the context that the historical piece is that they were built in the 1880s and what the landlords have found out is that when they go to renovate that the expenses are considerately more with the new requirements that are basically laid on them by the state and not the city.”

“I think the full context was that they were built without elevators, the [measurements of doorways might have been significantly narrower], the sprinkler systems were another one. It’s not as easy as when people say, “Why don’t we just convert these to downtown condos or residential.”

“What I heard was that the state steps in and says not a problem, that’ll cost you $200 and some thousand dollars. [The buildings] were built for one purpose but now that purpose is not relevant.”

“We want to make it relevant, but we don’t have the funds to do it.” Mr. Davies replied, “That’s the perfect summary of a lot of people’s concerns.”

Councilwoman Yahraus continued, “I think my only thing with that is if you’re going to buy a building or invest in anything, not just a building, you can have this with a house and you come in thinking that everything is perfect and all of a sudden the furnace goes out or the roof gets a leak in it, that’s one of the things you take as a landlord.”

“I feel that you take that on, I understand that there are sometimes circumstances that can not be helped but most of the time that needs to be looked into when you invest in it.”

Mr. Davies agreed saying, “We agree. As a development organization we think that there are responsibilities that you have in the joys of home ownership, if you will.”

Councilman Kozumplik shared his appreciation of everyone coming out and voicing their opinions and concerns, that’s a great start. My feeling is that we need some type of revitalization.”

“We need to take that plan and devise it with the business owners, property owners, communities and devise a plan so that we can take it to the foundation and getting funding, or put grants to it.”

“I don’t agree with the ordinance that was put on, I think it’s too burdensome monetarily on some of the business owners, especially if they are investing money in their properties. It really doesn’t address the root cause, because if there isn’t enough population, you’re not going to get the business to invest the $500,000 or whatever is [needed] for a building. I think we need a plan.”

Mr. Davies explained, “Part of our intension that day was to simply facilitate the conversation. There was a lot of emotion around it and maybe people hadn’t processed that and hadn’t gotten some of the logic side.”

“I think now, some of the cards are on the table and I was satisfied with the outcome that day in terms with those in attendance, they threw out some ideas and this has been a great start to a conversation.”

“The Development Foundation moving forward, we see the next step in terms of helping the city and everyone find a solution, which is what we said we would do, we are well positioned to do that. We’ve watched a lot of other communities like Van Wert, etc., start to do this.”

“There are a lot of bright minds in that room and in the community, who can help look for better ways on how to do that. We’re set up very well to do this, we have 40 years of doing this with the Bryan Development Corporation.”

“We’re forming relationships with lenders and other organizations. We’re the only 501C3 in the community that buy, rent, and sell property, so we can be part of that plan as well.”

“Perhaps, with some of the capital funds the COVID-19 relief funds that are coming out, one of the over-arching things through the conversation was, can the city take a more strategic interest in capital improvements and things of this nature, can it make a site more functional.”

“We’ve picked up a lot of information and we’re committed to improve ordinance understanding and clearing up myths about doing business and our group is actively doing that right now and to help people understand what they are getting into when they buy a building.”

Mayor Schlade said, “We are always willing to work with BDF and I want to thank Mr. Davies and BDF for, A. facilitating this meeting and, B. this is a really honest report of what happened in that meeting.”

“There was nothing left out, good, bad or indifferent and I appreciate the time that it took to compile this in a week’s time for council.”

“I just think it’s really well done, so thank you for that.” Council made a motion to table Ordinance 15, 2021 for future discussions.

“So what I’m going to ask of council is for just a motion to allow all liquor permits to be approved and also to speak to those businesses in Bryan that have a liquor permit your application and fees are due and post marked by June 2nd. Motion to Approve

Status Change – Wastewater: Status Change request for Jeff Warner. Warner completed his 1-year apprenticeship as a Class 2A Operator and per contract that he be moved to the status of Class 2B Operator. Motion to Approve

Discussion of Police/Fire Dispatcher Residency: Chief Chapa said, “I’m here to speak with you in reference to dispatch.”

“Since dispatch is combined between police and fire there have been discussions that residency be opened up to what the City Handbook has for every other status, besides safety services we’d like to have an in-state of Ohio residency for the dispatchers, they’re the only ones who will be affected by this.”

“If we’re going to cast a bigger net in our application process, which I asked for permission to do last council, we’re trying to get a bigger pool for applicants.”

Mayor Schlade explained, “What this would require from Council is a motion to recognize that the police/fire dispatcher fits under the Handbook element of, All Employees Outside of Safety Service and allow for them to just have a valid Ohio Driver License.”

“The reason again is because with police and fire they have a residency requirement because they are called in to an emergency situation with little notice and that does not happen with dispatch and we have a little bit of redundancy with central communications and also all of our police officers and firemen couldn’t in a tornado catastrophe handle dispatch so the drive time isn’t an issue for them, and so we’re just trying to fit this category into our normal Handbook policy for residency.” Motion to Approve

LeAnn can be reached at publisher@thevillagereporter.com