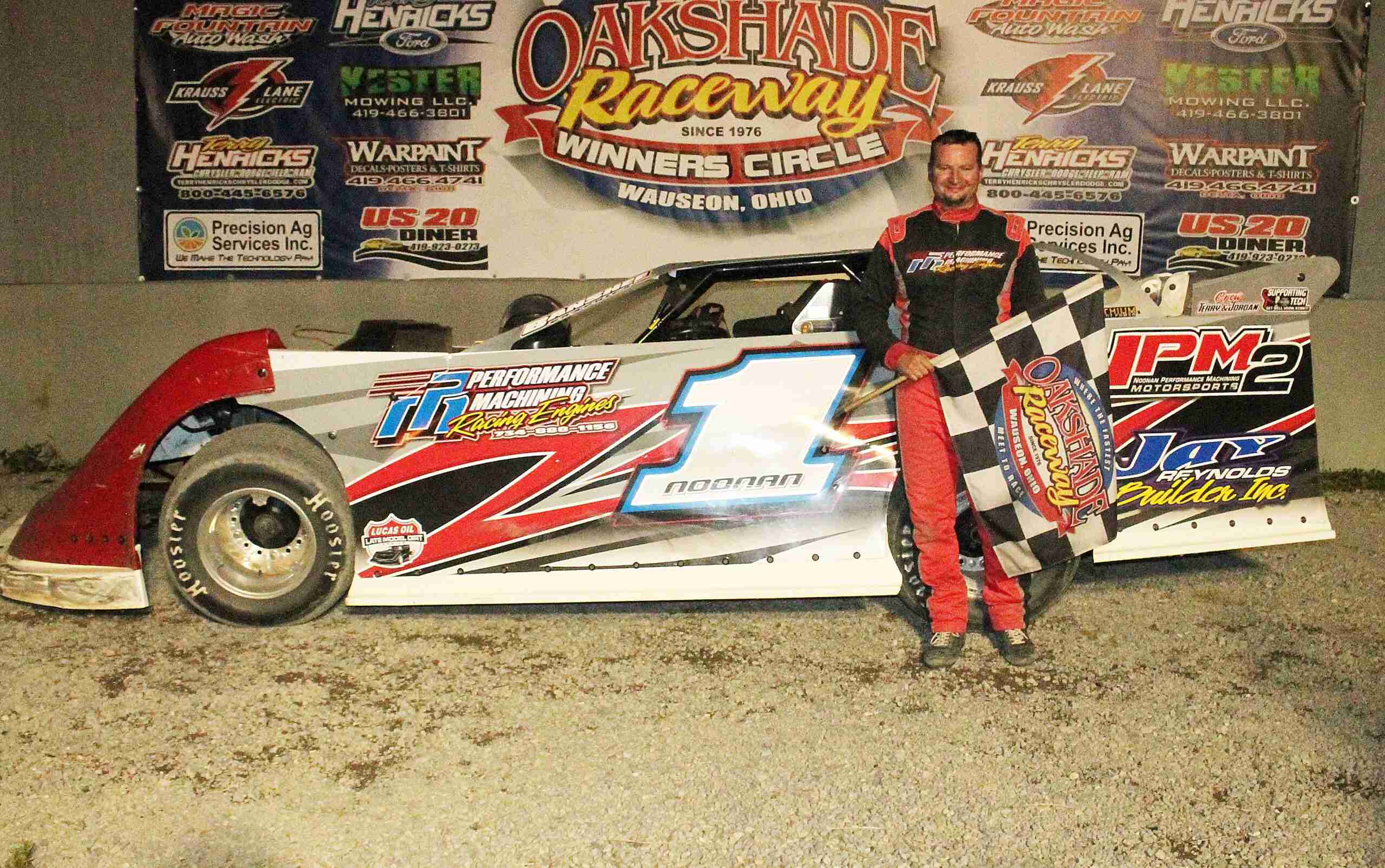 In other action, the youngster, Carter Schlenk, picked up his very first Sportsman feature win. Kolin Schilt made it three in a row in the Dominator Super Stock A Main and Nick Jenema out of Grand Rapids, Michigan, claimed the Compact A Main win.

Dusty Moore started on the pole of the DIRTcar UMP Late Model feature and pulled out to a big lead after the drop of the green flag. Moore caught the tail end of the lead lap cars just past the halfway point of the race which tightened things up for the lead allowing second-place B.J. Gregory and a couple others to close in.

Sylvania, Ohio’s Casey Noonan took advantage and passed Gregory for second on lap 15. Last week’s feature winner joined the party closing in on the leaders while running in the fourth position.

Without the aid of any caution flags, the top four ran nose to tail while running in lapped traffic. Noonan got by Moore for the race lead with just five laps remaining and Schlenk moved up to second two laps later.

These two drivers had an epic battle for the lead last weekend, but this week it was Noonan coming on out on top with Schlenk settling for second.

Gregory finished third and Mike Bores ended up fourth. Defending track champion Devin Shiels had to race his way in through the consolation race and was able to gain 11 positions to finish fifth.

Eleven-year-old Carter Schlenk earned his very first feature win in the Sportsman A Main, leading from flag to flag after starting on the outside of the front row.

Last week’s feature winner, Carter Murday, kept the pressure on Schlenk for much of the race, but the McClure, Ohio, driver endured and took the checkered flag.

Murday settled for second with Josh Robertson close behind in third. Joe Smith and polesitter Jesse Jones were the rest of the top five finishers.

Stryker, Ohio’s Kolin Schilt made it three for three with Dominator Super Stock A Main wins this season. William “Bubba” Cundick led the first six green-flag laps after starting on the outside of the front row of a caution-filled main event.

Schilt closed in from his fifth starting position and drove by on the outside to take the lead away on lap seven. He then set sail on his way to win number three in three attempts.

Cundick held on to finish second followed by Dean Taylor, Roscoe Stetten and Justin Gamber who were all in a tight pack at the finish.

The Compact A Main started out with some three-wide racing action for the race lead with Ryan Okuley, Nick Jenema and Eric Carr. Jenema would get the advantage on the outside leaving Okuley and Carr to duke it out for second just behind.

Eventually Carr would take the position and then began to pressure Jenema for the lead until getting held up behind a lapped car.

Jenema went on to pick up the checkered flag with Carr settling for second and Okuley close behind in third. Brett Ireland and Dylan Iffland rounded out the rest of the top five finishers.

Donovan Paskan out of Fayette, Ohio, took the lead from Scott Barnhart on the second lap of the Dominator Super Stock B Main and went on to pick up the victory with Shane Estes coming from the back of the field to wind up second. Barnhart slipped back to third followed by Craig Turner and Bobby Swagger.

With a field of nearly 40 Compacts, a Compact B Main was necessitated. James Stamper took command early and appeared to have the car to beat, but Jeff Goodman out of Wauseon, Ohio, was on a mission and closed up on Stamper and then over drove turns one and two and lost some ground.

The annual Barney Oldfield Race for the DIRTcar UMP Late Models highlights the next event at Oakshade Raceway on Saturday, June 18th.

Also back in action will be the Sportsman, Dominator Super Stock and Compact classes with gates opening at 4pm and racing at 7pm.