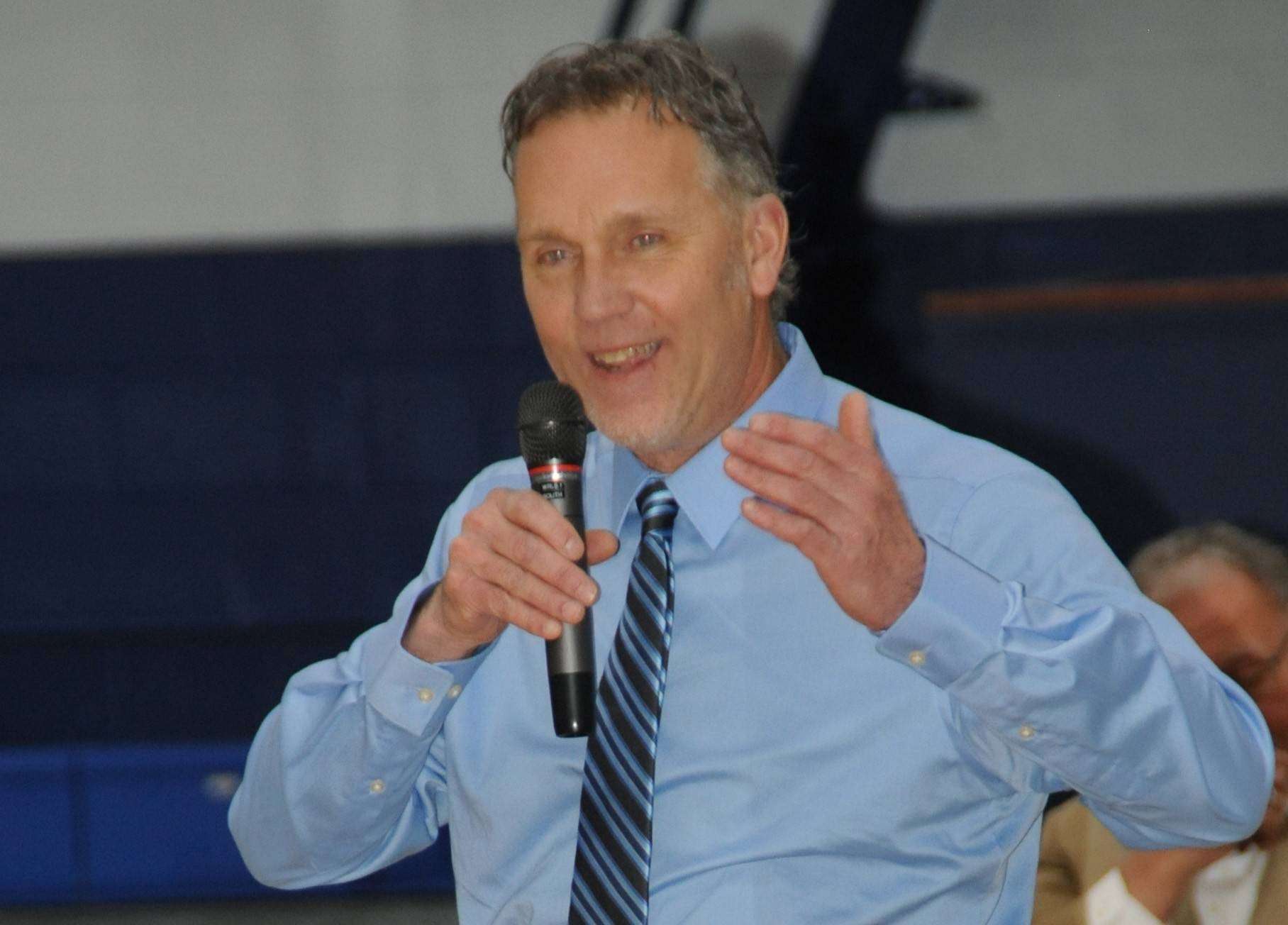 A celebration of the life of legendary Montpelier football coach, Hobert ‘Hobie’ G. Krouse, was held on February 16 in the gymnasium of the Montpelier High School. Coach Krouse passed away on December 4, 2019 at the age of 88. He was born on January 22, 1931 in Pulaski, Ohio to Ernst and Gertrude (Keesbury) Krouse.

Coach Krouse graduated from Montpelier High School in 1949, and proudly served his country in the United States Army during the Korean War. On September 4, 1955, he married Ethlyn “Sis” Kuhlman, and she survives along with their children Suzanne Cordrey of Mason, Ohio, and Kenny Krouse of Bryan; grandchildren Ann (David) Roda, Kristi Cordrey and Madysen Krouse; great grandchildren Evan and Reagan Roda; and sister-in-law Klar Kuhlman of Grand Ledge, Michigan.

Hobie left an indelible mark while at Montpelier High School. His team was the State runner up in 1973, and he holds the record for the most wins as a head football coach in MHS football history, with a record of 85-73-6. In 2010, Howald Field in Montpelier was renamed Hobe Krouse Field, and in 2015, Hobie was inducted into the Montpelier Hall of Fame.

The greatest tribute to the legacy of Hobie Krouse is found in his children, and in all the young men that he coached and guided physically, emotionally and spiritually. At this event, eight Montpelier alumni who played under Coach Krouse from the 1960s to the 1980s paid tribute to their old mentor, along with former Archbold Head Coach John Downey, Former Edon Superintendent and Tinora High Principal Kent Adams, Mike Heilshorn, Tinora Defensive Coordinator, and Landon Drewes, former Tinora quarterback under Coach Kenny Krouse. Each speaker had a different perspective on Coach Hobie Krouse, some being humorous, and some serious.

Every coach is tasked with teaching their respective game, and Hobie was no exception. He did not stop there though as Lynn Oberlin of the class of 1975 explained. As kids transition into young adulthood, there are always bumps in the road. Hobie helped guide his charges into responsible adulthood, and also had the members of his team attending a different church every Sunday.

It wasn’t a mandatory program, but it was proof that Coach Krouse was serious about guiding his team in every aspect, including the spiritual. Oberlin also related the story of how his first carry as a sophomore fullback resulted in a lost fumble that was returned for a touchdown, but despite the disastrous first play, Hobie did not give up on him.

That never give up aspect came to the fore again with Dr. Steven Bumb of the Class of 1982. He recalled a practice when he was suited up with his teammate and close friend, Kenny Krouse, and Hobie gave an unapologetic lesson on the fallout of quitting the team.

Dr. Bumb recalled a teammate who rebelled against coaching, saying, “Players were having an argument on how to play inside linebacker,” Dr. Bumb recalled. “He didn’t take the coaching very much; he didn’t like it, so he threw down his headgear and said, ‘I quit.’ I’m standing next to Kenny, and I’m thinking, ‘Surely Hobe will calm him down and make this right. I mean, we’re a small high school; we need everybody, and he’s one of our best players.’

“I’ll never forget Coach Krouse’s words. He looked him right in the eye and said, ‘Make sure you take all that equipment off first. That’s the property of Montpelier High School.’ So the player throws down his headgear, shoulder pads, strips his pants off, strips off his girdle pads, and wearing nothing but a jockstrap, walks across the field.”

“Last thing I ever saw was his butt cheeks going across the field. I said, ‘Kenny…did that just happen? I mean, we need that guy.’ Surely he’ll send Jimmy Lee…over there to calm him down and get him back. No…he didn’t send nobody. I learned two really valuable lessons that day. Nobody is more important than the team; this is commitment to the team. And number two…always wear sanitary shorts over your jock strap.”

Kent Adams said that one of the reasons that he worked to get Kenny Krouse hired as the head coach of the Tinora Football program was because of his experience working with his father.

He recalled one particular incident, recalling, “When I was in Edon, we scheduled Montpelier in football every year, and we got our brains beat out every year. They always won. We had to schedule them because at that time, small schools like Edon didn’t have football…back then. So we scheduled Archbold and Montpelier, and you know the results.”

“However, one year at the half,” he remembered, “…we were ahead 16-9. The lights went out at halftime. The electricity went off. The transformer blew on the old football field. We had to play the next day on a Saturday.”

With nothing to do, Adams and a small party drove over to Hamilton and the Welcome Inn. Coach Krouse came in with a small party of his own, and a member of each party began to jaw each other. When the two verbal combatants got up and began making their way toward each other, Adams recalled, “Hobie, being the peacemaker, got up, put his arm around the one and an arm around the other, and I thought he was going to knock their heads together…but he didn’t. He just said, ‘Let the boys settle it on the field tomorrow morning,’ and they did settle it on the field, and guess what…Montpelier beat our brains out again.”

A gentleman in the audience stood up and said that he remembered that game, because he was playing for Montpelier. While in the locker room, the man recalled, “Hobie told us, ‘If you don’t beat Edon, you’re walking home.'”

The final Locomotive guest speaker of the day was Glyn Buntain of the Montpelier Class of 1965. His final year was the first under Hobie Krouse, but even with limited exposure, Coach Krouse left his mark on Buntain, who brought his #65 lineman’s jersey with him. “On my best day I probably weighed about 150 pounds,” he remembered. “I’m a little bit heavier than that now.”

Buntain continued, “Outside this room in the hallway, there are pictures of many great Montpelier athletes. I’m telling you, you can look long and very hard, and you will not find my picture out there anywhere. I am what they called ‘a teammate,’ and I think Coach understood that football teams got made up of guys like me too. It took the big guys, the middle sized guys, and the little guys like me.”

“We all had a job to do. Our first meeting with our new head football coach was in early August of 1964; we sat at the north end of the old gymnasium…and in came Hobie Krouse. Coach was going to take charge of our football program. Now Coach was not alone when he arrived that day; following close behind him was his son, Kenny Krouse. He was a very rambunctious, small kid who got into everything while he was there. Now my guess is, the times being what they were, Coach really couldn’t afford a babysitter…it was just that way.”

He continued, “Now, he told us on that very first day that things were going to change. If you are not going to be dedicated to winning through hard work, now was the time to get up and get out of the gym. Two-a-day practices were not pleasant with our new coach. 19 seniors had never been pushed so hard in their whole lives. He went on to coach a winning season, and we came in second in the NWOAL. That was the first time in my four years of playing football that we had a winning record. Things did change.”

“Coach taught us the value of teamwork, responsibility, show up early, do the best job that you can, and no matter how tough it gets, pick yourself up and try. These things have stayed with me and helped carry me through the rough parts of my life. I will always be grateful to Coach for being the very first to think that we could be winners.”

After the ceremonies, nobody was eager to depart. Memories had been rekindled, and the recollections of days of youth with Coach Hobert ‘Hobie’ Krouse flowed freely with amongst both smiles and tears. It takes a special kind of person to reach beyond the years to unify a room full of people.

“The one thing that never, ever stays in the grave,” Coach Heilshorn said, “…is a person’s character.” That high character of Hobie Krouse was on full display in the Montpelier gymnasium on the afternoon of February 16.

Timothy can be reached attim@thevillagereporter.com