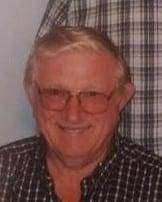 Charley Griesinger, age 81, of Delta went to Heaven late Friday December 4, 2015. Charley will be remembered as a hard working family man. He owned and operated Charley’s Country House in the 1980’s and early 90’s. He also owned Grandma’s Kitchen in Swanton, retiring several years later. Famous for his broasted chicken he then worked part time for Winchester’s in Delta with many customers following him there.

Charley was born on April 28, 1934 in Delta to the late John and the late Mary (Godden) Griesinger. He restored many Case Tractors and proudly displayed them at the Threshers Reunion and the Fulton County Fair. His most recent hobby was tracing his family’s roots. Charley accepted Jesus as his Savior and was a member of the the Crossroads Evangelical Church in Wauseon.

Funeral services will be held at 11:00am Thursday December 10, 2015 at the Crossroads Evangelical Church in Wauseon with Pastor Tyler Quillet and Pastor Matt Boyers officiating. Interment will follow in the Winameg Cemetery. Friends may visit with the family from 2:00-8:00pm on Wednesday at the church. Those planning an expression of sympathy are asked to consider the charity of the family’s choice. Online condolences may be made to the family at www.GrisierFH.com. The Edgar-Grisier Funeral Home in Wauseon has been entrusted with arrangements.