Coyotes: The Myth And Its Reality 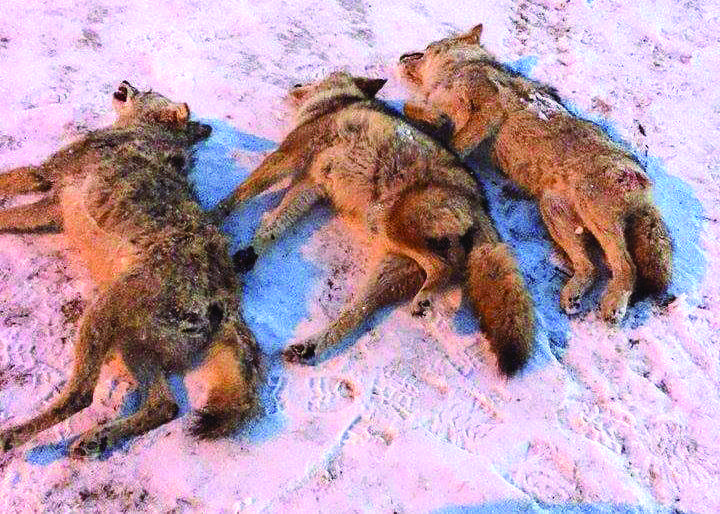 At first glance, coyotes seem to be a growing problem in this part of the country.

Indeed, just last month, a privately owned mounted police horse was killed in Southeastern Michigan, with the culprit widely believed to be an unusually large pack of coyotes, though the Michigan Department of Natural Resources (DNR) disagrees.  In the western portions of the United States, rabid coyotes have even been known to attack humans from time to time.

But how big a threat are they in Northwest Ohio?

“Coyotes cause very little damage.”  DNR Officer Tom Kochert proclaimed.  “They’re not that much of an issue, really.”

Kochert has been on the job for twenty-five years, and has served in the Williams County area specifically since 1993.  According to him, coyotes have been wandering about this county since the mid-90’s.

Neighboring Fulton County has its fair share of coyotes as well.  However, as Kochert reports, an abundance of hunters and trappers keep the animal’s population down, with three groups capturing or killing between 100 and 150 coyotes a year.

Those hunting and trapping coyotes in Williams County don’t have nearly as much success, though, killing or trapping only dozens per year.  Unlike Fulton, which is mostly comprised of flat land, Williams has a much more rugged and heavily wooded landscape.

“It’s significantly harder to do so in Williams County.”  Kochert said of hunting the canines.  “Coyotes can run in circles all day long.”

With coyotes roaming these lands for so many years, one would imagine that they’ve created a good many problems throughout that time.  And yes, there are several cases in which people report coyotes have attacked their livestock.  Of course, sometimes people are wrong with their assessment that coyotes are to blame for the loss of their animals.

In fact, during his twenty-three years working in Williams County, Kochert can recall only a single time in which they’ve been right.

On a property in which Kochert himself had permission to trap, and had been doing so for some time, a coyote attacked a sheep.  When attacking livestock, it is never a pack mentality that drives a coyote.  Therefore, the guilty animal was removed, and things returned to normal.

“Once the coyote was captured, there were no more problems.”

And it’s not as though the rest of the coyotes simply vacated the area, either.  Nor have the farmers radically altered their method of keeping predators separated from their sheep.  Coyotes still roam the area, and the pastures are still open.  Yet there hasn’t been another attack.

Typically, when people cast blame on coyotes, feral dogs are the real problem.  Aside from the single case of the coyote killing a sheep, there have been at least four separate incidents in which dogs have dispatched of the livestock animal.  Sheep have been found chewed up or drowned by dogs.  And these dogs usually aren’t wild.

A major reason people attribute the loss of their animals to coyotes is that they hear the howls of a coyote piercing the night skies during the Spring and Summer months each year.  That should not be cause for alarm, though.

“If you really listen to it, you’ll hear a deeper yelp.”  Kochert pointed out.

That deeper yelp is the “vixen,” or mother coyote calling her pups back to the den.  Coyote mothers raise their pups alone, teaching them how to hunt from March to October, before the young coyotes are left to fend for themselves.  The pups practice hunting within a close proximity from their home, and are called back by the mother after a while.

When it comes to hunting itself, coyotes are opportunists.  They won’t randomly or wildly attack anything in order to satiate their hunger.  Instead, coyotes carefully measure their prey, prioritizing weak and wounded animals in open space.  In general, a coyote isn’t going to put the effort into bypassing man-made defenses in order to obtain a meal.

Oftentimes, coyotes are accused of killing a person’s chickens.  However, in most cases, getting to those chickens is simply not worth its time, according to Kochert.

“He’s not going to work that hard to kill that chicken.”

There are other animals that will, however.  Take the raccoon, for example.

Minks, possums, and even skunks have been known to target chickens, as well as several other small domesticated animals humans fancy having around.  In particular, minks very much enjoy hunting rabbits, even if they’re in their cages.

“A coyote can’t fit through that six inch hole in your rabbit’s cage.”  Stated Kochert.  “A mink sure can, though.”

That’s not to say coyotes won’t attack healthy domesticated animals.  If the risk is minimal, and the reward is great, they will absolutely go after livestock.  What usually keeps them away is humans.  Yet, if humans don’t take the proper steps to keep coyotes from feeling threatened by humanity, namely trapping and hunting them, that can change quite quickly.

“They get pretty brazen.”  Informed Kochert on unimpeded coyote activity.  “They start losing their fear.”

This is why hunting and trapping coyotes is so important.  Without that natural deterrent, they begin to stray closer to more populated areas in search of food.  Now seeing humans as a non-threat, coyotes will be less likely to hesitate when going after livestock or other domesticated animals.

Those who feel as though coyotes are a problem are able to hunt them, as the state of Ohio labels them as varmints.  This means that there is no restriction on season or firearms for hunters seeking out coyotes.  However, if hunting on a property other than one’s own, they will need to obtain a hunting license.

More coyote hunters would be a welcome addition to Williams County.  The more they’re hunted, the less likely coyotes are to become anywhere near as big an issue as people believe them to be.