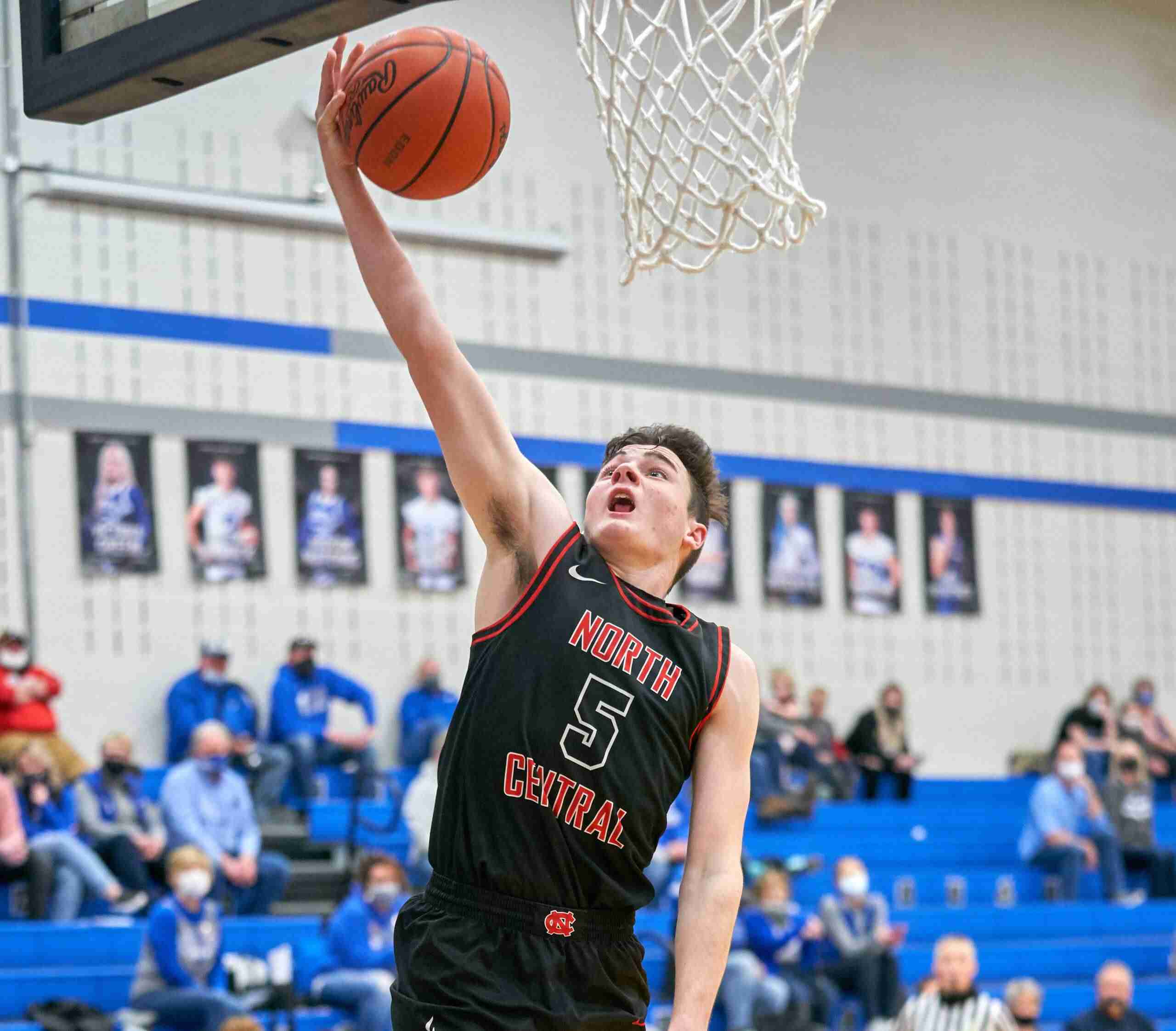 GAME CLINCHING PLAY … Colin Patten finishes a fast break to put the game away for the Eagles after a steal in the final minute. (PHOTO BY RICH HARDING, STAFF)

EDON, OHIO-After two quarters of basketball it looked as though the No.11 seed Edon Bombers were going to get their third win of the season over North Central.

The 13th seeded Eagles fought back from a ten-point second quarter deficit with the help of timely three-point shooting and Edon turnovers to pull out a 48-43 win in the Division IV sectional semifinals.

The BBC rivals went back and forth in a tightly contested first quarter that saw Edon go on a 7-1 run after trailing 4-3 to take a 10-5 lead.

Colin Patten responded for the Eagles by hitting their first triple of the night to draw within 10-8 before Edon scored four of the last six points in the quarter for a 14-10 advantage.

Edon increased the lead to 18-10 in the opening minutes of the second quarter on field goals from Cassius Hulbert and Dustin Hamrick.

Joey Burt would drain a three-pointer for the Eagles, but Edon’s Drew Gallehue went 1/2 at the foul line and added a basket to make it 21-13.

Ethan Steinke then added an offensive rebound putback to make 23-13 with 3:06 left in the first half, forcing a North Central timeout.

The Eagles answered with a 7-2 run to finish the half after the timeout with Zack Hayes getting his first points of the night and then freshman Ben Pettit scoring five straight to cut the Edon lead to 25-20 at the break.

The Bombers had opportunities in the first half to build their lead but Edon was just 4/11 at the free throw line and committed seven turnovers.

The Eagles quickly tied the score to start the second half as Hayes hit a two and then a three ball to even the score at 25.

Hamrick helped right the ship with an offensive rebound bucket and Gallehue also hit the boards for a put back to give Edon a 29-26 lead.

It was Patten’s turn to dial up a triple to tie the game 29-29 before a Steinke field goal put the Bombers back in front at 31-29.

The lead was brief as Pettit would knock down North Central’s third three-pointer of the quarter to put the Eagles ahead 32-31 heading to the fourth quarter.

The turnover bug continued to hamper the Bombers in the third as they were guilty of six and were just 3/12 shooting the basketball.

After an Eagle free throw made it 33-31 Jack Berry and Hulbert turned in back-to-back conventional three point plays to put the Bombers up four at 37-33 with 6:04 to go.

With the Edon lead 41-39, Landon Justice made two of the biggest plays of the night for North Central scoring on a third effort offensive rebound and then gave the Eagles the lead 42-41 by draining a triple from the left wing.

Two free throws by Pettit made it 44-41 setting the stage for Patten to seal the game for the Eagles as he stole the ball from Gallehue at the foul line and went coast-to-coast for a layup to give the Eagles a 46-41 lead with around 1:00 to go.

The Eagles used the long ball to make their comeback as they hit seven treys on the night and were 16/49 (32%) shooting overall with 10 turnovers.

North Central (7-16) will travel to No. 2 seed Toledo Christian on Friday for the sectional finals.

Be the first to comment on "D4 BBK Sectional Semifinal: North Central Rallies In Second Half To Defeat Edon 48-43"