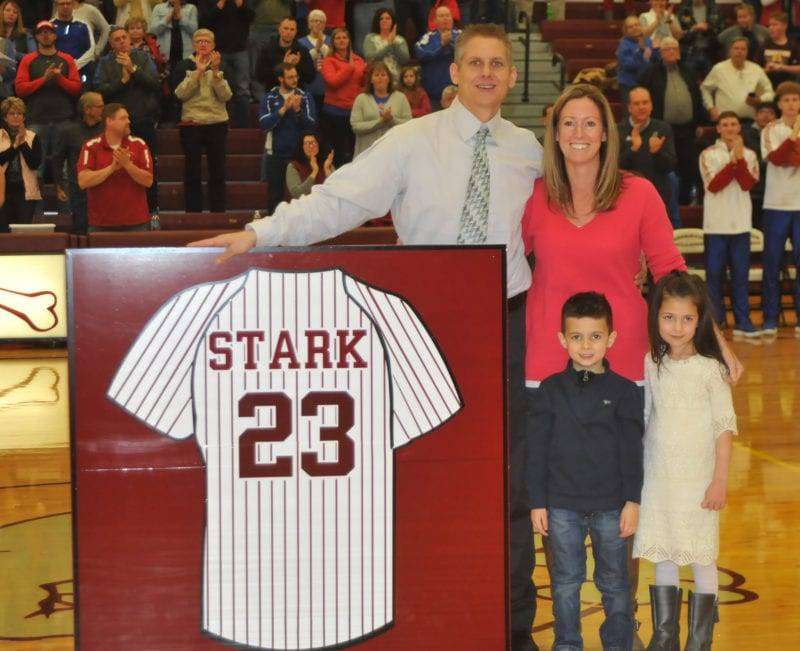 The Village of Edgerton may be small, but when it comes to honoring its own, Edgerton is a giant. That point was proven on the evening of December 16 in the Edgerton gymnasium between the Edgerton versus Crestview JV and Varsity games. On this night, you needed to arrive early in order to secure a parking place anywhere near the school. The village had turned out in droves to honor one of its own, Class of 1993 member, Denny Stark.

Denny had a powerful career on the court for the Bulldogs, racking up over 1,000 points, and gaining All-Ohio recognition as a senior. While those numbers are worthy of accolades, Denny Stark made a bigger name for himself in the middle of the baseball diamond. Once again, Denny would receive All-Ohio status as a senior, this time as a hurler. The University of Toledo offered a scholarship to the Bulldog blue chipper, and Denny rewarded their confidence by leading the Rockets in wins, punchouts and complete games during his senior campaign. His efforts did not go unnoticed, and he was taken by the Seattle Mariners in the fourth round of the 1996 MLB June Amateur Draft. Denny was off to Everett to pitch for the Mariners’ rookie league team, the AquaSox.

As he gained in skill and strength, the promotions for Denny kept coming. He found himself in places like Lancaster, California, and Appleton, Wisconsin, before getting a call up on September 15, 1999. The parent club was calling, and Denny was off to Seattle to join Alex Rodriguez, Ken Griffey Jr., Raul Ibanez, Jamie Moyer on a Mariners team managed by Lou Pinella. Denny appeared in five games in 1999, then it was Double-A to start 2000.

In 2001, he again worked the AA level for just one game before getting promoted to the AAA team in Tacoma where he went 14-2 with a 2.37 ERA, fanning 130 and walking 41 in 151.2 innings pitched. After another late call up, Denny worked four games for the Mariners, the first on June 30 where he started and went 5.2 innings, allowing 3 runs on 8 hits, fanning 4 and walking one in earning his first Major League win, 5-3 over the Anaheim Angels. His Tacoma record and Pacific Coast League Pitcher of the Year award made him a hot commodity, and he was traded to the Colorado Rockies to hurl in the pitchers graveyard called Coors Field.

After a seven game stopover in the AAA Colorado Springs club, Denny was called up to the Rockies. Instead of wilting in the thin air of Coors Field, Stark thrived, going 11-4 in 2002. The future looked great for the former Edgerton Bulldog…then the shoulder injuries began to appear. Over the next six seasons Denny only racked up a dozen decisions, nine of which were in the loss column. Released by the Mariners and the Cleveland Indians, Denny threw his last professional pitches in 2010 at the age of 35 for the Independent League Bridgeport Bluefish. He went 8-4 in his final professional season, Striking out 86 over 134.2 innings.

After hanging up his cleats, Denny returned to the Mile High City. Today, he lives in Denver where he is a Firefighter/EMT, a husband to wife Shelly, and father to daughter Taylor, and son Brayden. His baseball career took him from coast to coast, and although his home is now nestled in the Rocky Mountains, his hometown still holds him in reverence as one of their own.
When Denny and his family came out to center court with Edgerton Athletic Director Keith Merillat and District Superintendant Kermit Riehle, the spectators in both banks of seats in the gymnasium came to their feet in a standing ovation.

Something like this can be expected when a local legend returns to his or her old stomping grounds. What separated Edgerton from the rest was the fact that although the applause stilled as Denny picked up the microphone to thank and address the audience, the audience did not sit down. Of such was a point of proof offered by Stark.

He noted that the small town atmosphere was dominated by the spirit of family. The community, after all these years, still sees Denny as a member of the extended family, and vice versa, and the standing ovation resumed as he showed off the sign bearing his number 23. Living in small-town America…it’s a pretty good deal all the way around.

Be the first to comment on "December 20th, 2017 – Edgerton Honors Native Son Denny Stark With A Uniform Retirement Ceremony"