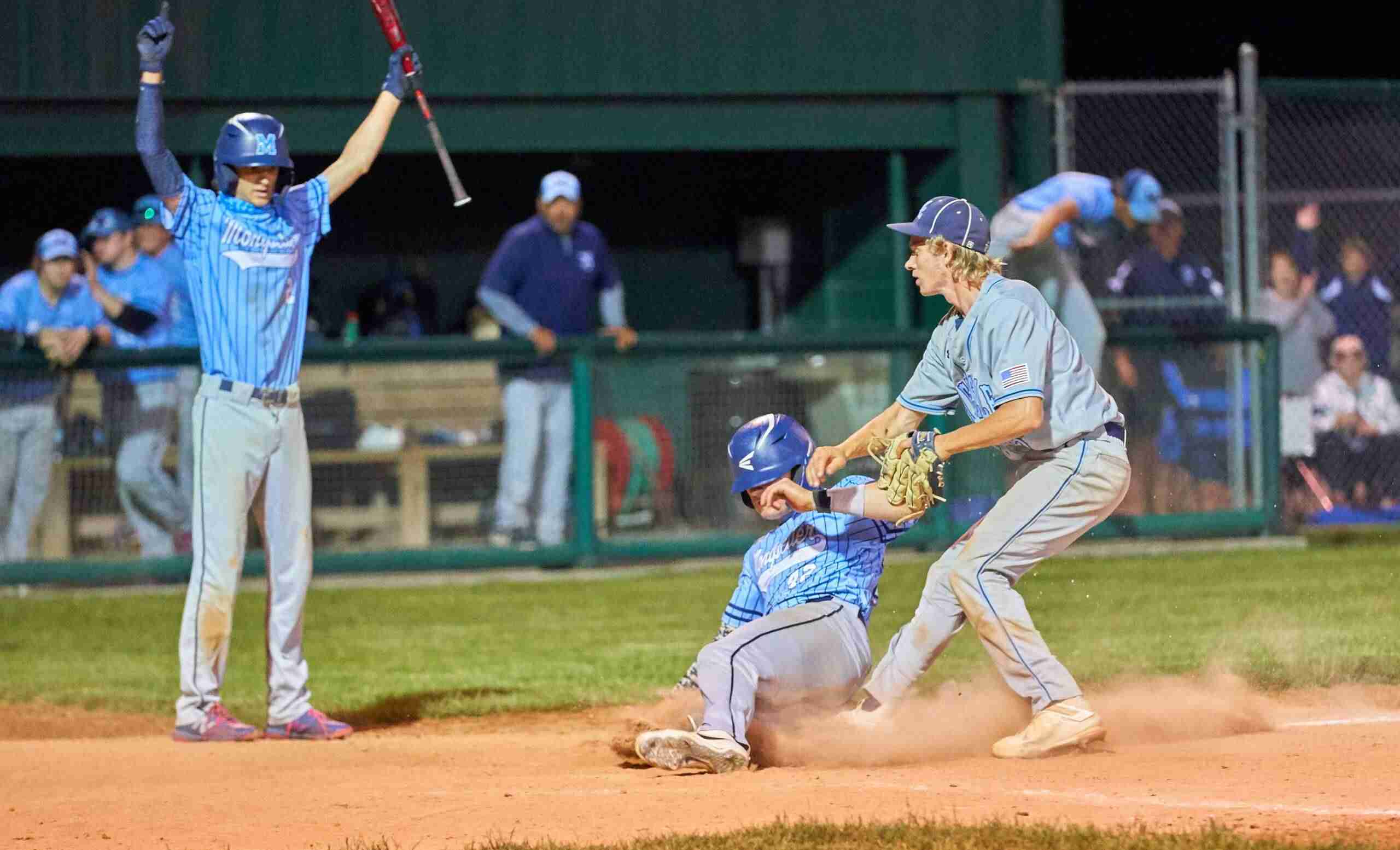 GAME-WINNING WIN …Gavin Wurm scores on a wild pitch in the bottom of the 11th to give Montpelier an 8-7 win over Ayersville. (PHOTO BY RICH HARDING, STAFF)

BRYAN-The Locos scored four times in the bottom of the seventh to tie the game and then Gavin Wurm scored the winning run on a wild pitch in the 11th inning as Montpelier beat Ayersville 8-7 in a marathon.

It was the number two seed Montpelier striking first as starting pitcher Collin Crisenberry led off the bottom of the first with a single.\

Crisbenbery eventually wound up at third when a Tylor Yahraus put down a bunt that was mishandled by Ayersville pitcher Caden Craft as Yahraus ended up at second on the error.

Crisenbery and Yahraus would score on wild pitches before Craft would get a groundout and strikeout to end the inning.

The score remained 2-0 until the top of the third when Ayersville would push across their first run of the night.

With one out, Blake Eiden was hit by a pitch, Craft would reach on error that allowed Eiden to go to third where he scored on a sac fly by Weston McGuire to make it a 2-1 game.

The Locos got the run back in their half of the inning though as Crisenbery singled, stole second, advanced to third on a sacrifice by Yahraus, and then scored on a sac fly from Blake Altaffer.

The Pilots tallied a run in the top of the fourth as they strung together three straight hits to trim the Montpelier lead to 3-2.

Ayersville would eventually load the bases in the fourth with two outs but Crisenbery induced a pop out by Craft to escape the jam.

Ayersville captured the lead in the fifth as they put runners on second and third with one out before Zac Moss connected for a two-run single to center to give Ayersville a 4-3 lead.

Craft struck out the side in the fifth to set the stage for the Pilots to chase Montpelier starter Crisenberry in the sixth.

After getting Eiden to fly out, Crisenbery allowed a single by Craft and then walked McGuire to put two aboard as Montpelier head coach brought in Blake Altaffer.

Altaffer struck out the first batter he faced but then walked Abe Delano and Moss (4-6, 4 RBIs) would drive in two more runs with a single to right to stretch the lead for Ayersville to 6-3.

The Pilots added one more run in the inning as Luke Delano followed Moss with an RBI single before Altaffer recorded a strikeout to end the inning.

The home half of the seventh started with the first three Montpelier batters reaching base as Ethan Marihugh walked, Easten Richmond was hit by a pitch, and David Bowman hit a sharp single to center.

Montpelier would score their first run of the inning as Ayden Santos reached on error to score Marihugh and Wurm hit into a fielder’s choice to score Richmond and make it 7-5.

Crisenbery was next for the Locos as he had an RBI single to right and Yahraus hit a sac fly to center to score Wurm and tie the game 7-7.

Both teams were retired in order in the eighth and Montpelier would get to runners on base in the ninth but Altaffer popped out to end the threat.

The top of the 10th found Ayersville knocking on the door as with two outs they would get a McGuire double, followed by walks from Blake Heuenstein and Abe Delano to load the bases.

Altaffer was able to keep the Pilots of the board as Moss popped out in foul territory to Marihugh at first to keep the score 7-7 heading to bottom of the 10th.

The Locos went quietly in the 10th before Ayersville opened the 11th with a bunt single by Luke Delano who was then sacrificed to second by Tyler Winzeler.

Altaffer would get Brayden Amoroso to lineout to Crisenbery in center who in turn fired to Yahraus at second base to double off Delano and end the inning.

After the first two batters were retired by new Ayersville pitcher Blake Eiden, Wurm doubled to center to put the winning run in scoring position.

Crisenbery (3-4, 1 RBI, 2 BB) walked and then a wild pitch by Eiden allowed Wurm to move to third and Crisenbery to second.

With Yahraus (2-2, 1 RBI) at the plate and a 1-0 count, the next pitch from Eiden was in the dirt and skipped away from the Pilots catcher and Wurm slid home from third with the winning run to send the Locos to the district championship.

Altaffer, after a shaky start when he entered the game in the sixth, would get the win on the hill for the Locos as he went 5 2/3 innings surrendering one run on five hits with eight strikeouts.