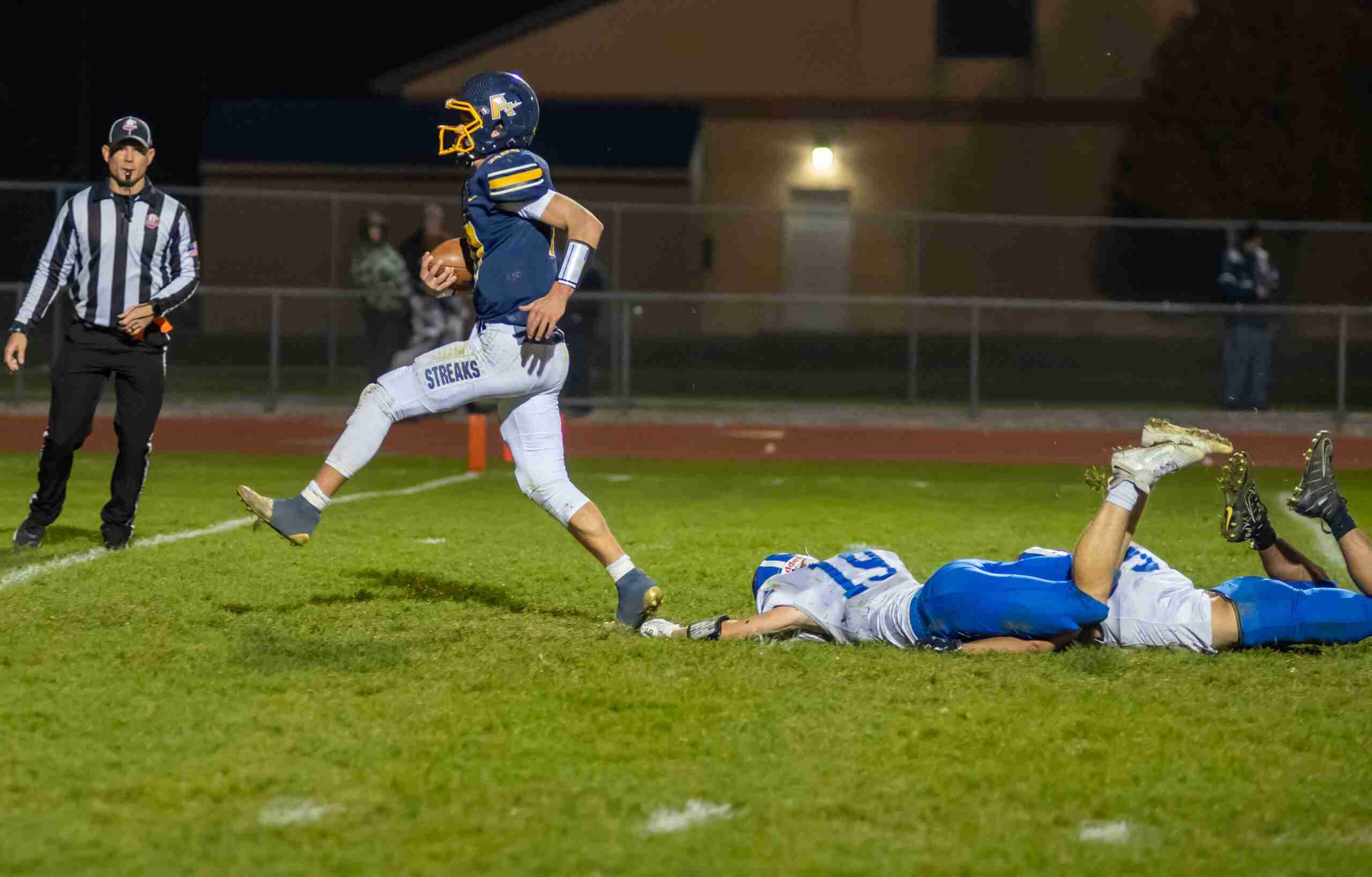 ARCHBOLD – The Bluestreaks rushed for 212 yards and passed for 205 on the way to a 42-7 win in the regional quarterfinals over Western Reserve and advancing Archbold to the regional semifinals for the third consecutive season.

The way the game started it appeared Archbold would have a running clock in their favor for the entire second half.

It was a seven-play, 74-yard drive for Archbold to start the night with DJ Newman hitting Gavin Bailey on a drag route over the middle for a 37-yard TD and a 7-0 lead just over two minutes into the game.

Archbold quickly moved the ball on their second possession as they went 73 yards in eight plays, ending with Newman finding running back Carson Dominique all alone over the middle for a 22-yard score to grab a 14-0 lead.

After a three and out by the Roughriders, the Bluestreaks were on the march again and after a Newman to Hunter Cullen-Lemley 22-yard hook up followed by a couple runs from Dominique it was first-and-goal for Archbold at the Reserve nine-yard line to end the first quarter.

The opening play of the second quarter found Archbold in the end zone again as Newman tossed a nine-yard scoring strike to Charlie Krieger make the score 21-0.

Next, it was the Bluestreak defense’s turn to register a big play as Karter Behnfeldt intercepted Reserve quarterback Jude Muenz to stop a promising drive for the Roughriders with 9:00 to go in the half.

After nice runs from Dominique and Newman on the ensuing possession, the Bluestreak drive would stall after a couple penalties to give the ball back to Western Reserve.

The Roughriders then engineered their best drive of the night as they took 12 plays, including 11 runs, to go 73 yards in 5:21 ending with a three-yard TD run by Muenz to make it 21-7 with :35 seconds left until halftime.

Western Reserve started the second half with a three and out on offense and Archbold went back to work with a five-play, 54-yard drive ending with Dominique taking the pitch on an option play from Newman as he went eight yards for the score to make it 28-7.

Another empty possession by the Roughriders followed the Archbold score as the Streaks got the ball back at their own 32-yard line after the punt.

The drive opened with Newman going to Cullen-Lemley on a 25-yard pass play and eventually Archbold had a first down and ten at the Reserve 11-yard line. Two plays later, Newman hit Behnfeldt for a nine-yard touchdown pass to put the Streaks in control at 35-7

Archbold’s final possession of the third quarter followed another Roughrider punt as Newman would cap off the five-play drive with a 27-yard scoring run to push their lead to 42-7 and moving the game to a running clock with :59 left in the quarter.

“They’re a well-coached team and took advantage of our mistakes”, said head coach David Dominique. “We made some adjustments and came out and played very hard in the second half. I’m proud of us being able to advance on and get a shot at Liberty.”

Newman led the Bluestreak thru the air (16/21, 205 yards, four touchdowns) and on the ground with nine carries for 107 yards and a touchdown.

Dominique ran for 75 yards on 17 totes and Cullen-Lemley had six catches for 89 yards.

NWOAL rival Liberty Center (10-2) will be Archbold’s (12-0) opponent in the regional semifinals on Saturday night at Defiance High School. The Bluestreaks won the regular season meeting with the Tigers 41-7.

“We just told the guys you’ve got to flush that first game from your memory, it’s gonna be two totally different teams”, said Dominique when looking ahead to the rematch with Liberty Center.

“It’s tough to beat a team twice in one season and they’re a good physical football team that’s going to try and run the ball a lot. We just gotta get back to work.”