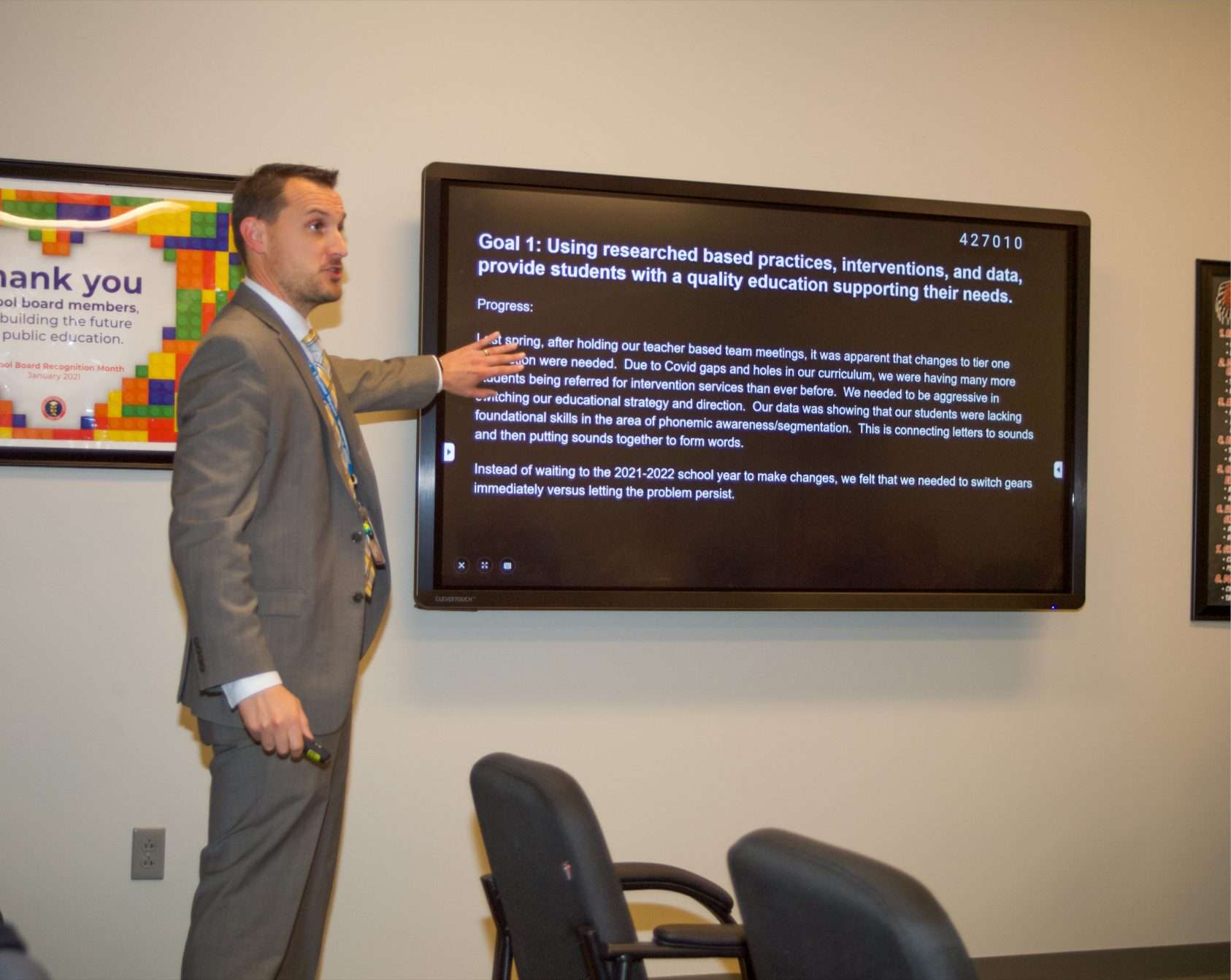 GOALS … Wauseon Primary School Principal Blake Young addressed the school board regarding future mandates coming down from the state and goals the school is working towards. (PHOTO BY JACOB KESSLER, STAFF)

The Wauseon School Board held their meeting on Thursday, November 4th. The meeting was called to order at 5:30 p.m. followed by the Pledge of Allegiance and roll call. The board first made note of two additions that were made to the agenda for the night.

Next, a motion was made to approve the minutes from the previous meeting which passed. With no members of the public present to speak, the board moved to approve Stephanie Wallington to receive a Wauseon High School Diploma as part of the schools +22 Adult High School Diploma Program.  Stephanie stated that she was “very proud and would display it in her house” to show how proud she is.

Wauseon Primary School Principal Blake Young then addressed the board regarding future mandates coming down from the state. He first let the board know that telephone conferences were still being made as an option for parents.

“We have had a lot of change at the primary school since last spring due to unfunded state mandates. With COVID gaps that we have right now our second graders haven’t had a normal year. The scariest word in the English language is change but we are going to see a lot of it,” Mr. Young continued.

A new Dibel 8 assessment was given that allowed the schools staff to see exactly where they needed to focus their attention. This allowed teachers to use intervention strategies to address the issues now, which saw a big improvement.

Mr. Young then spoke about the upcoming state mandates. He explained that these state mandates are currently unfunded. House Bill 436, known as the Dyslexia Bill, was passed that will require schools to have a multi-sensory structured literacy certification beginning with the 2022-2023 school year.

The program is for grades K-3 and will require a tier one dyslexia screening to be conducted sometime between January 1st in Kindergarten through January 1st of first grade. Students in grades 4-6 can be screened at the request of a parent or teacher.

New students in grades K-6 entering the state will also be required to be screened. This is due to the entire state requiring these screenings, but it may not be required in others.

Mr. Young also spoke to the stress that teachers have been under, especially with them having to learn some of these programs very quickly and with short notice.

“I’ve had meetings with multiple crying staff members but, since the year has been going on we have been taking barriers off one at a time and it is working,” said Mr. Young.

That program cost the school $141,000 and is a cost that has to be paid every four years. This first installment was paid for with federal covid grant money, but that will be unavailable for the next time.

Senator Gavarone and Representative Merrin have been contacted and asked to come and visit the school to see the programs and have discussions.

The board then discussed the information given to them by Mr. Young with Board President Sandra Griggs stating, “It bothers me what you say about the stress the teachers are under.”

The board then moved the State Report Card review to the December meeting. A motion was then made to approve a resolution to move 4 mills of inside millage to permanent improvement which passed.

Treasurer David Fleming then read a statement regarding the failing of the proposed 2% income tax levy. Mr. Fleming at some points during the speech became emotional due to the matter at hand.

“I want to thank all of the district residents that took time to be informed voters and come out in support of our proposed levy. I find it stunning that only 874 people in the Wauseon School district understand the important of this funding initiative.” Said Mr. Fleming

Mr. Fleming then went on to speak in regard to the five-year forecast. “House Bill 110 the Fair School Funding Plan was passed; it is so complex that the Ohio Department of Education cannot even release the final numbers regarding how much revenue we are going to receive until December past this forecast.”

Mr. Fleming brought a file up on the screen in the room to show the board a breakdown of the coming five-year forecast. The forecast shows the districts revenue and expenditures and takes it all to show a projected cash balance after all items are paid.

The forecast also shows what the numbers will look like if the tax levy passes this coming May. Instead of having a negative balance over $8 million, the school is projected to have a positive balance of $2,009,629 for fiscal year 2026.

Those numbers equal around $1 million in savings for the district. “That move alone is going to save some jobs,” said Mr. Fleming.

Revenue over expenditures shows that for the past two years the school has operated with deficit each year. That will continue with this year being projected to have a negative $1,112,122 deficit increasing each year and ultimately reaching a negative amount of $3,783,107 in fiscal year 2026.

“Had the levy passed those numbers would be drastically different. What that means is we are going to be out of money in year three again, which is going to trigger putting us back into fiscal precaution with the Ohio Department of Education which means we are going to have to write a corrective action plan again,” said Mr. Fleming.

Mr. Fleming then stated that the thought was that 25 staff members were going to have to be laid off in order to get back into shape. By saving the money from the insurance, it is probably going to be a reduced number. The board then moved to approve the five-year forecast followed by the bills and financial report.

A motion was then made to approve a list of donations that had been made followed by the then and now certificates regarding an emergency repair on an air conditioner at the High School, with both motions passing.

The board then moved to hear the Superintendents report. First, the board moved to approve a personnel list presented by Mr. Armstrong. Next, a request was received for Traven Yarbro for early graduation. A motion was made to approve the request which passed.

A change was made to the weapons policy. The board used to be able to allow someone to carry a weapon on school property that had a concealed weapons permit.

That has changed and you will have to have 25 years of experience in law enforcement or passed the peace officers training. A motion was made to approve the first reading which passed. A revision to the 2021-2022 school calendar was made to add an all staff in service day for November 10th.

A motion was then made to update the facilities fund maintenance schedule. This gives permission to pay for the roof of the Primary School building.

The board then entered into executive session at 6:31 p.m. for the consideration of the employment of employees. Upon return, the board moved to adjourn.