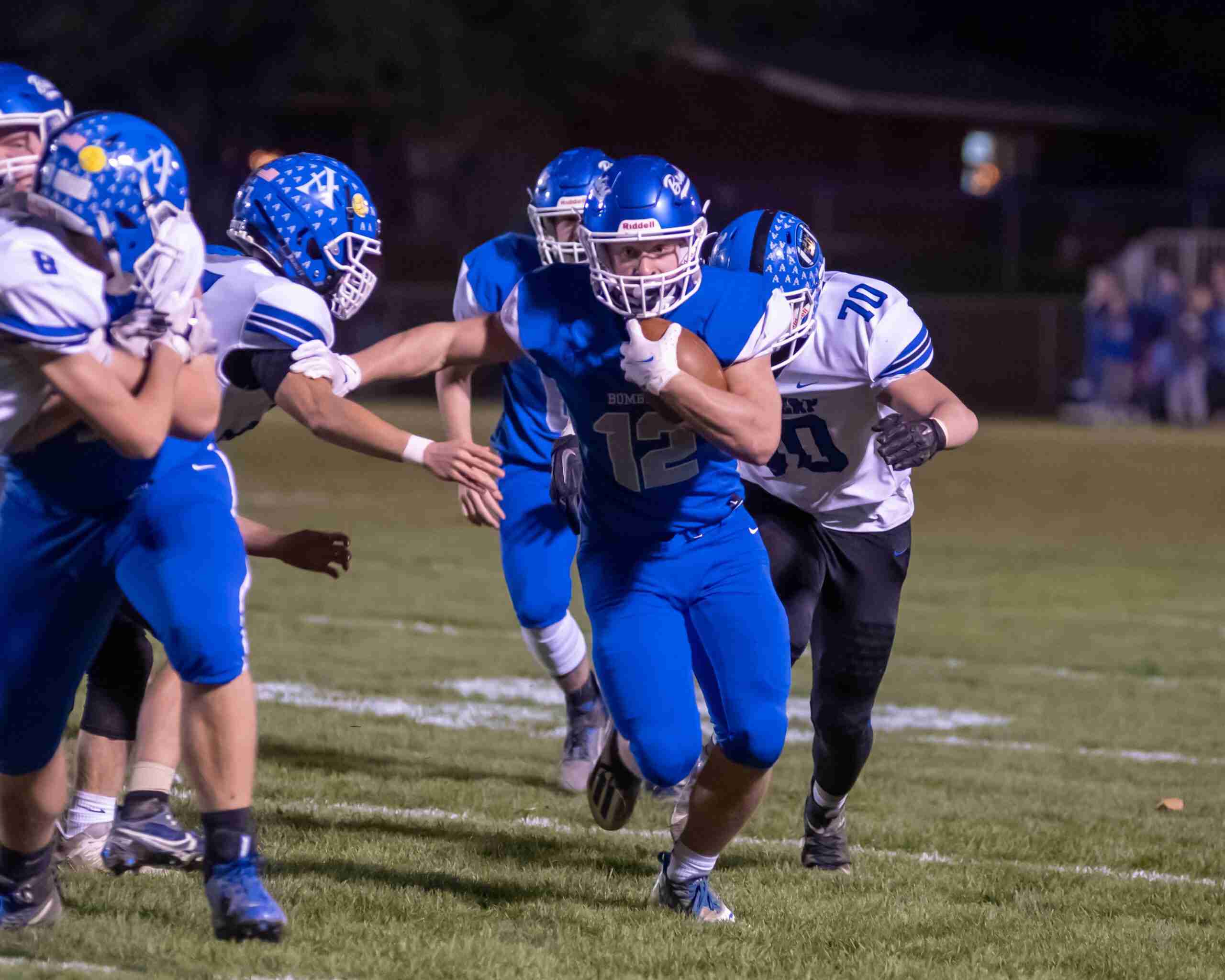 EDON SENIOR … Gannon Ripke looks for a hole to run thru in the first half versus Antwerp. (PHOTO BY JACOB KESSLER, STAFF)

EDON – Trailing by one point with under three minutes to go, Edon needed someone to make a play and it was Gannon Ripke who stepped in with three big plays.

On the first, Ripke fielded a punt at the Antwerp 43 and returned it for an apparent touchdown, but a block in the back penalty gave Edon the ball at the Antwerp 21-yard line.

Next, on fourth down and eight yards to go, Ripke made a diving catch for a first down at the Antwerp nine-yard line. Ripke then scored on the next play to put Edon up, 26-21, with 1:14 left.

Next, it was the defense’s turn to step up. After getting a first down on the Edon 48-yard line on an 18-yard pass from Carson Altimus to Kaden Recker, Antwerp appeared to have another first down on a screen pass to the Edon 32, but the play was called back because of a block in the back penalty on Antwerp.

Instead, the penalty moved the ball back to the 50-yard line. From there, the Edon defense forced three straight incompletions and Edon took over on downs with just six seconds left.

“On the punt return, I made sure I fielded it first, then made a couple of cuts and got some great blocks from my teammates,” Ripke said.

“Then on the completion on fourth down, Drew (Gallehue) scrambled and made a great throw. I just had to make sure I caught it. Then on the touchdown run, I knew I could get more yards if I cut to the outside.”

“Then I saw the end zone and I wasn’t going to be denied. Then at the end, our defense really stepped up.”

Antwerp then put together a long drive, moving to a first down on the Edon 28 but the Edon defense came up with a fumble recovery on its own 16-yard line.

From there. Edon put together a 14-play scoring drive to take a 6-0 lead, on a Gallehue two-yard touchdown run.

However, Antwerp answered right back to tie the game at 6-6, on a 34-yard TD pass from Altimus to Landon Brewer.

The Edon defense then stepped up to stop a late second quarter drive by Antwerp that had reached the Edon 23-yard line. The defense sacked Altimus for an eight-yard loss. Altimus then threw three straight incompletions and Edon took over on downs, to preserve a 14-6 halftime advantage.

Antwerp came roaring back to tie the game at 14-14, scoring on its opening possession of the second half. Altimus scampered in from the Edon 27-yard line and then found Parker Moore on the two-point conversion pass.

Edon then took a 20-14 lead after three quarters on Gallehue’s 20-yard TD pass to Hayden Dye. Next, Edon stopped another Antwerp scoring threat, taking over on downs at the Edon 19-yard line.

However, Antwerp put itself in position to take the lead when Brewer intercepted a Gallehue pass and returned it to the Edon 27-yard line. From there, Altimus completed a 26-yard pass to the Edon one-yard line. Altimus then scored on a quarterback sneak and Stephon Walker’s extra point kick put Antwerp up, 21-20, with 5:29 left in the game.

Antwerp then forced an Edon punt, but Edon got the ball back after forcing an Antwerp punt and was finally able to score to take the 26-21 lead.

Offensively, Antwerp was led by Altimus, who rushed for 134 yards and passed for 171 yards.

With the win, Edon (11-1) advances to the Division VII regional semifinals against Lima Central Catholic on Saturday, November 13th  at Findlay High School with kickoff set for 7pm.

“All I know is, we had five more points than they did,” said Edon head coach Bob Olwin. “Their kids made plays and our kids made plays. Our kids played really hard and do have a win to show for it.”