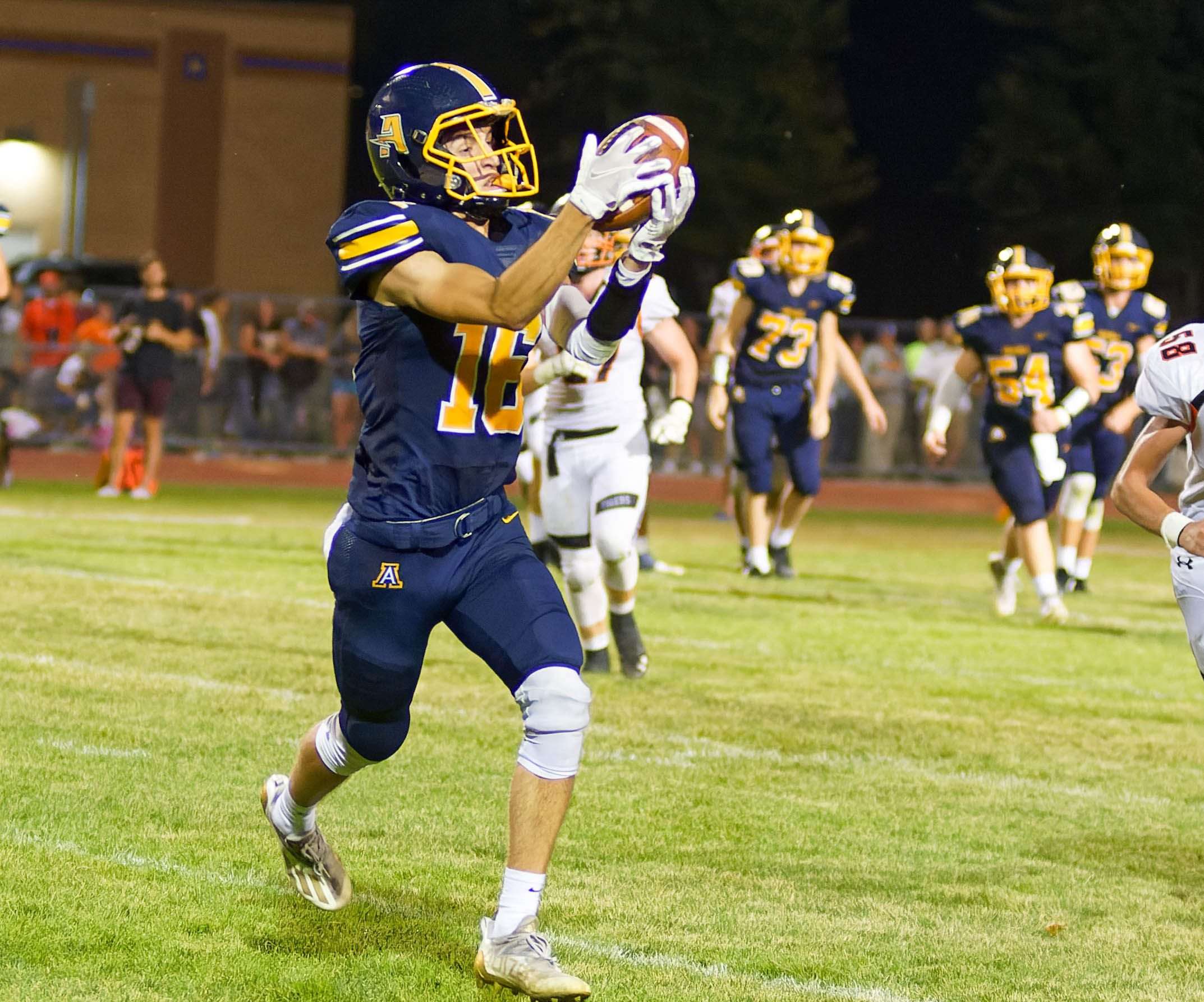 Karter Behnfeldt hauls in a pass during the Bluestreaks first meeting with Liberty Center on September 17th. (PHOTO BY JACOB KESSLER, STAFF)

Familiar foes will hook-up in the Division VI Region 22 semifinal at Fred J. Brown Stadium in Defiance Saturday night as Archbold and Liberty Center collide for the second time this season.

The NWOAL rivals met back on September 17th at Archbold in a game dominated by the Streaks 41-7.

Liberty Center took an early 7-0 lead in that game only to see Archbold score on six straight possessions to take control.

Archbold (12-0) has been a bulldozer this season, outscoring their opponents 500-81 including playoff wins over Delta (44-7) and Western Reserve (42-7) in the first two rounds respectively.

Senior quarterback DJ Newman is the straw that stirs the drink for Archbold with 1,264 yards rushing, 20 TDs and 1,894 yards passing with 25 touchdown passes.

Carson Dominique has emerged at running back to give Archbold a nice 1-2 punch on the ground with 1,172 yards and 16 scores.

The Archbold defense has been lights out so far allowing just 8.6 ppg and forcing 21 turnovers. Gabe Chapa leads Archbold in tackles with 88, Devon Morris has 55 and a team-high seven sacks and Newman tops the Streaks in interceptions with four, including returning one for a touchdown.

For Liberty Center (10-2), they opened the playoffs with wins over Bluffton (40-14) and Columbus Grove (21-13) to stretch their winning streak to seven games as the game at Archbold was their last setback.

While Archbold has presented a balanced offense, the Tigers are quite the opposite with a running game that as generated 3,028 yards this season.

Matthew Orr leads a three-headed attack for the Tigers with 999 yards rushing and 18 touchdowns, Teejay Moore has rolled up 916 yards with 12 touchdowns, and quarterback Zane Zeiter has added 619 yards on 113 carries along with 891 yards passing.

Defensively, Owen Johnson has been the catalyst for LC with 88 tackles followed by Orr with 53.