Edgerton Residents Wake Up To A Mess; Power May Be Restored Within The Day 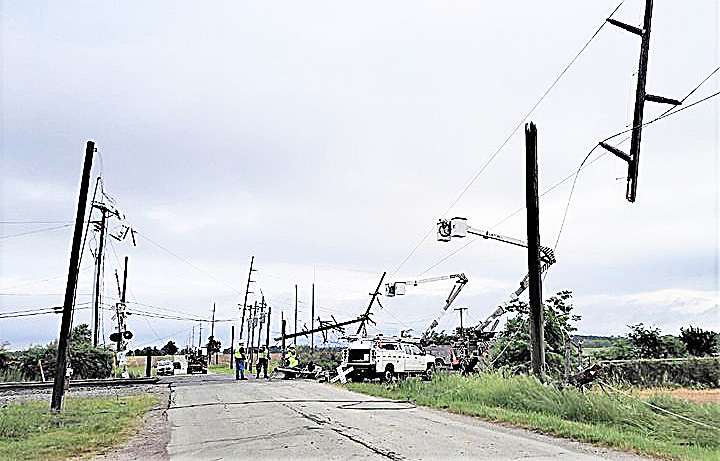 Residents within the Village of Edgerton and the surrounding area woke up to no power after what appears to have been either a high wind issue or lighting strike that hit the high voltage power lines at the County Road 5 substation according to Edgerton Mayor Bob Day.

This lighting strike or high wind allowed for the lines to be lowered enough for a train to then catch onto the lines and drag the poles with it.

In total, sixteen poles were damaged in some way by the dragging which are currently in the process of being switched out by Toledo Edison.

According to Lauren Siburkis with Toledo Edison, a total of twelve poles are needing to be replaced. The current estimated time frame to have the work completed is by 11:00 p.m. on Tuesday, May 7th.

As of this writing, 421 customers are without power in Edon, 7 in Edgerton, 34 in Florence Township and 30 in St. Joseph Township.

These numbers do not include Edgerton customers who are supplied power by the village municipal system.

According to Mayor Day, the village is in the process of getting a generator system up and running. Through a partnership with AMP, their team will be assisting in the implementation of the system to ensure there is no overages.”

“This should give the entire village temporary power once the system is up and running. Through a Facebook post, Mayor Day asked residents that, when temporary power is provided, to “please be wise in your electrical usage.”

The village is also dealing with several areas of high water due to the storms from the night previous. According to Mayor Day, several residents reported receiving four to five inches of rain in their gauges which has attributed to the high-water concerns.

In the meantime, a Facebook post made by Denise Dangler Knecht and shared by Mayor Day states that, “The Church Christ at 4855 Casebere/Miller Road is welcoming anyone to come out for coffee/water.”